Time travel can’t be real. That’s the conclusion many have come to after pondering on the notion of playing with that tricky fourth dimension. And it’s this conclusion that Mawdryn Undead tackles, seeing fit to sneer at the problems of paradoxes and getting into fisticuffs with the argument over memory.
The 1983 serial explores one of Doctor Who’s remits beautifully as we meet a new companion and a very familiar maths teacher. Twice. But it wasn’t always this way…

Whatever Happened the Space Whale?

2010’s The Beast Below introduces the Star Whale, possibly the last of its kind, but plans were afoot to have a similar aquatic beastie pulsing through space nearly 30 years earlier. Though it was initially pitched as a Fourth Doctor tale, Space Whale was adapted into a Fifth Doctor story, written by Pat Mills and John Wagner (who soon left the project), and also introduced new companion, Vislor Turlough. While Turlough’s inclusion was added to Mawdryn Undead, much of Mills’ story, renamed Song of the Space Whale, was lost. The serial would’ve revolved around the Doctor encountering a group of working-class people living in said Space Whale and attempting to stop the creature from being slaughtered by a factory ship. Yes, it sounds a bit like a mash-up of The Beast Below and Torchwood: Meat.
(Mills and script editor, Eric Saward, disagreed on many points, however, and the story was held back in development for far too long – until finally Saward confirmed it had been dropped. But in 2010, Big Finish revived it as part of their Lost Stories audio range, this time featuring the Sixth Doctor and Peri, as The Song of the Megaptera.)
Nonetheless, Song of the Space Whale is filed under ‘stories that never were,’ a massive catalogue consisting of tantalising titles like First Doctor story, The Hidden Planet by Malcolm Hulke; Second Doctor tale, The Return of the Neanderthal; the Fourth Doctor’s The Sea of Fear and The Lost Legion; and Tenth Doctor stories like A Midwinter’s Tale and Tom MacRae’s Century House. 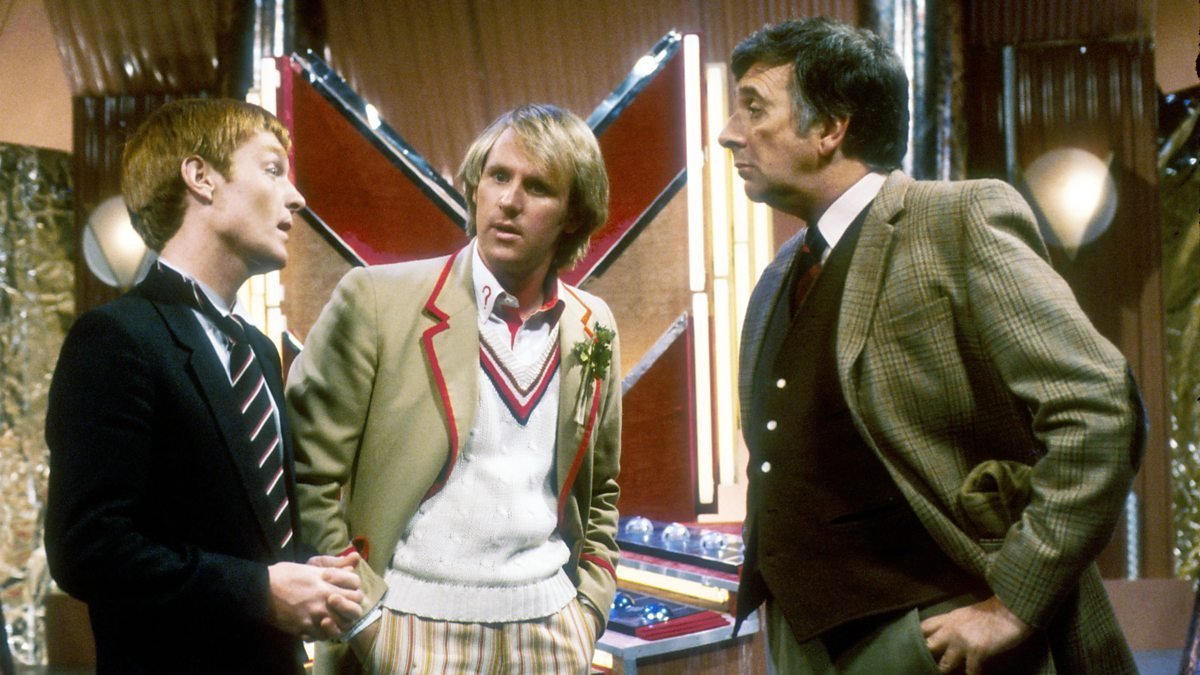 While Mawdryn Undead is perfectly understandable to relative newcomers (as long as you know the Doctor’s a bloke who traverses the universe with friends and can regenerate – a particularly notable narrative point – you should be fine), fans of the Third Doctor era will take particular pleasure in watching the Brigadier being reunited with the universe’s favourite Time Lord.
But considering the plot examines the idea of bodily renewal perhaps more closely than any previous tale, it’s strange to note that the production team initially considered bringing back a character who had absolutely no experience of regeneration when he was part of the show. In fact, it hadn’t even been dreamt up. And that character is Ian Chesterton.

Played by William Russell from the series’ premiere in 1963 to 1965’s The Chase, Ian was due to return, after his fellow star, Jacqueline Hill – companion, Barbara Wright – had briefly returned to the series in Meglos (1980), albeit playing a different character.
It’s recently been revealed that fellow 1960s ‘companion,’ Susan, was also set to return, but actress, Carole Ann Ford, turned it down after being told by producer, John Nathan-Turner, he didn’t want Susan to call the Doctor ‘Grandfather.’ Ian was a science teacher, so Mawdryn Undead‘s public school setting was perfect. Unfortunately, Russell turned out to be unavailable for the tight dates set aside for filming due to theatre commitments – and Ian has never returned to the series (though Russell appeared as Harry, the Security Guard at BBC Television Centre, in the celebratory biopic, An Adventure in Space and Time… and fans are hoping he’ll be in Class too, as he’s listed as Coal Hill’s Chairman of the Governors). Perhaps this is better though: it leaves Ian as a blissful 1960s memory, settling down with Barbara maybe and reminiscing about the time he led the Thals to usurp the Daleks and that time she was a Goddess to the Aztecs.
However, this did leave a sizeable gap in the story. Harry Sullivan, played wonderfully by Ian Marter, was briefly considered for return (he last appeared in Who in 1975’s The Android Invasion), but then John Nathan-Turner remembered the farewell party for Fourth Doctor, Tom Baker…
Nicholas Courtney, who played Colonel and then Brigadier Lethbridge-Stewart from 1968’s The Web of Fear, had told the Doctor Who producer that he’d definitely be up for returning to the role – and the Brigadier was a perfect fit for Mawdryn Undead.
In fact, Season 20 celebrates Doctor Who, bringing back elements from previous serials, including Omega (in Arc of Infinity), the Mara (in Snakedance), and the Master (The King’s Demons), leading up to the 20th anniversary celebration, The Five Doctors. But that doesn’t mean that the entire season was solely about looking back. Mawdryn Undead bravely introduced a shocking new companion. In Vislor Turlough, the audience are presented with a character nearly as mysterious as the Doctor himself; one that threatens to kill the Time Lord. It was a bold move, and actor, Mark Strickson, was seemingly up against all odds to create someone millions of people would like and care about – despite potentially being a murderer.
Whilst the plot linking Turlough to the Black Guardian continued over Terminus and concluded in Enlightenment, his relationship with the Doctor evolves throughout his 33-episode tenure; however, his full backstory isn’t revealed until his final story, Planet of Fire (1984).
And though Strickson faced a tough role, Turlough remains a memorable and well-loved companion to the similarly-brilliant Fifth Doctor. In fact, they’re about as perfect a Doctor-companion team as you could hope for.

Knowing How Many Beans Make Five

Mawdryn Undead, despite being tasked with introducing a new companion and mixing in classic elements, isn’t just a box-ticking exercise. It’s a solid, clever, and thought-provoking story that challenges some of the show’s main ideas. The Brigadier and Turlough aren’t just shoe-horned in either. But how did this notion of a never-dying crew and a time twisting adventure first come about…?
Due to The Song of the Space Whale falling through, Enlightenment was meant to replace its slot – thankfully, it remained the final story in the so-called ‘Black Guardian Trilogy,’ which nicely wrapped up Turlough being blackmailed into killing the Doctor – but writer, Peter Grimwade, instead pitched an idea based on the story of the Flying Dutchman. The myth of the Flying Dutchman is thought to have originated in 17th Century folklore: a ghostly ship with a crew doomed to sail the sea forever, and similar to legends like the Loch Ness Monster, it’s a great source to mine for Doctor Who. Particularly as seeing the Flying Dutchman is said to be a portent of doom…
The ship was first written about in George Barrington’s A Voyage to Botany Bay (1795), in which it was described:

“In the night watch some of the people saw, or imagined they saw, a vessel standing for them under a press of sail, as though she would run them down: one in particular affirmed it was the ship that had foundered in the former gale, and that it must certainly be her, or the apparition of her; but on its clearing up, the object, a dark thick cloud, disappeared. Nothing could do away the idea of this phenomenon on the minds of the sailors; and, on their relating the circumstances when they arrived in port, the story spread like wild-fire, and the supposed phantom was called the Flying Dutchman.”

Since then, the phantom ship has been featured in many pieces of literature… and some real-life accounts, including that of King George V! The King’s former tutor (who took the Monarch and his brother, Prince Albert Victor of Wales, on a voyage) regaled the story:

“At 4 a.m. the Flying Dutchman crossed our bows. A strange red light as of a phantom ship all aglow, in the midst of which light the masts, spars and sails of a brig 200 yards distant stood out in strong relief as she came up on the port bow, where also the officer of the watch from the bridge clearly saw her, as did the quarterdeck midshipman, who was sent forward at once to the forecastle; but on arriving there was no vestige nor any sign whatever of any material ship was to be seen either near or right away to the horizon, the night being clear and the sea calm. Thirteen persons altogether saw her…”

Obviously, Doctor Who isn’t the only show to use the fabled ship as inspiration, as it also cropped up in Spongebob Squarepants, the 1960’s Spider-Man cartoon, and 1976’s Land of the Lost, as well as films like Pirates of the Caribbean: Dead Man’s Chest (2006). And the notion of a never-dying, cursed crew contrasts nicely with the ‘care-free’ Doctor… Or does it? The serial examines the possibility of living forever and sticks in the mind of the audience, making us question whether the Doctor’s long life is a blessing or a curse.
It’s a theme that raises its head with regularity, in tales like Pyramids of Mars, School Reunion, and The Time of the Doctor, but however moody the Doctor gets over his own immortality, he clings to life, troubled by the thought that helping out Mawdryn and his crew would be his own end…
Mawdryn Undead is quintessential Doctor Who: riffing off legends; playing with expectations; looking to the past whilst promising an intriguing future.

(Adapted from an article originally published on Kasterborous in April 2013.)