A Brief Introduction to Ben Jackson and Polly Wright

Hello, Polly! Right. Now I’ve got that out of my system, let’s take a look at the characters of Polly Wright, as played by Anneke Wills, and Ben Jackson, as played by Michael Craze, shall we?
The partnership of Ben and Polly, as the last companions of the first Doctor, is one that was pivotal to the successful introduction of the concept of regeneration into the mythos of Doctor Who. It was their character journey and their shared experience with the astonished viewers’ reaction to this amazing “rejuvenation” of the tired and worn out old Doctor which helped to carry us along and accept this much younger and livelier pixie-like second Doctor.
Let’s take a whistle-stop tour of Ben and Polly’s adventures to get a feel for their characters… The War Machines sees Ben and Polly introduced and previous companion, Dodo, rather unceremoniously written out half way through the story, without so much as a “cheerio”, which is quite sad, really. The show makers seemed much more interested in their new playthings, the “posh” girl Polly – a lively modern girl about town in 1960’s London, and Ben – the down-to-earth navy man, depressed at being left behind on a shore posting while his crew mates patrol the West Indies. It is interesting to note that this was the first story to be completely set in modern day London and we get to see the First Doctor in a nightclub! Not an environment one usually associates with this particular Doctor!
The Smugglers is interesting in that Polly gets to be the resourceful one in this 18th century tale and ends up being the one to plan to their escape when she and Ben are both captured by pretending to be a witch.
The Tenth Planet is the biggie in this bunch as it is the one that introduces the world to the concept of “regeneration”, but it is really the follow-on story, The Power of the Daleks, that brings the drama – Ben is sceptical that this comical little man is really the Doctor, believing that he is an impostor, but Polly is more willing to take the cosmic hobo at his word. Oddly enough, it takes the intervention of a Dalek to confirm that he really is the Doctor. 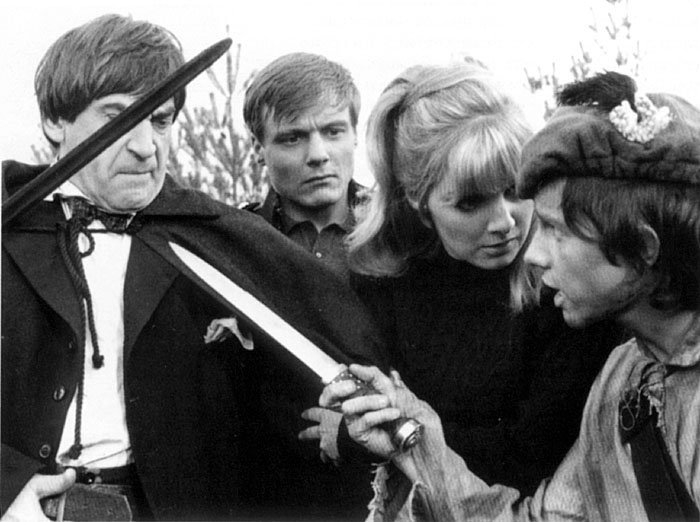 The Highlanders is another important milestone in Who history as it introduces everyone’s favourite Highlander – no, not the immortal Scot with a  French accent, but Jamie McCrimmon of the clan McCrimmon as played by the wonderfully endurable Frazer Hines who is still very active in the world of Doctor Who, playing both Jamie AND the Second Doctor in Big Finish’s audio adventures. The Highlanders is another story that showcases Polly’s independence, strength and just a hint of a cruel streak as she takes great pleasure in blackmailing Ffinch.
The Underwater Menace starts off with Ben and Polly somewhat unhappy with their TARDIS travels and Polly wanting to go home. They don’t, though, and find themselves mixed up with a mad scientist trying to take over the world. As you do.
It’s with The Moonbase that we see Jamie start to really come to the fore and sadly, this seems to be at the expense of Ben and Polly as they come towards the end of their brief run on the show. They suffer in the same way that Dodo did when they were introduced with the show runners being more interested in their new Scottish Piper toy. However, Polly is the resourceful one again in this story when she comes up with a plan to take out the Cybermen using nail varnish remover. The three companions work well together in this situation working together to flesh out Polly’s plan, creating a mixture including acetone, benzene, ether and epoxy propane to make what Ben calls a “Polly Cocktail”, which they shoot at the Cybermen with adapted fire extinguishers.
The Macra Terror has Polly rather uncharacteristically screaming more than usual, but she does become a miner. Maybe this screaming is a symptom of the writers losing interest in the character? 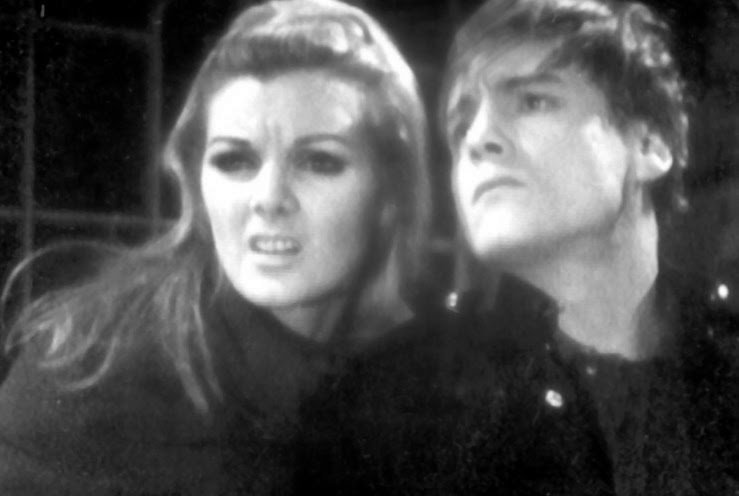 And finally, we have The Faceless Ones. Ben and Polly’s last adventure. In another tragic move, they were absent from a large portion of the story and only get their send-off via a brief pre-recorded sequence at the end. In an amazing twist of fate, this story ends on what turns out to be the same day in which Ben and Polly originally climbed aboard the TARDIS. Polly wants to stay in London for a bit, probably just for a rest and not meaning a permanent departure. However, the Doctor takes matters into his own hands, telling them they’re lucky to be back on their own world and then waves them good-bye.
So, across their adventures we get to learn that Polly is confident, resourceful and caring and is most definitely not a dumb blonde, but will use her feminine wiles to manipulate people. On the downside, though, she does have a habit of trusting too easily which gets her into trouble. Ben, on the other hand, is a grumpy sod to start with but lightens up through his time travelling with the Doctor, Polly and later on, also Jamie. We see at times that Ben is quite clever and knowledgeable, knowing that nail varnish remover contains acetone and that the Earth and Mars are on average around 200 million miles apart. Not really nuggets of info you’d expect from a sailor, that’s for sure. As an interesting aside, Polly’s surname was never actually mentioned on TV – it was introduced in Gary Russell’s 1995 Missing Adventures novel, Invasion of the Cat-People. There was also a period when we thought her surname was Lopez – an off the air transcription of a mishearing of a name used by a duplicate of Polly in The Faceless Ones – “Michele Leuppi from Zurich“. For some strange reason, fans thought that Lopez/Leuppi was really Polly’s surname – an odd assumption, given that this was a fake Polly that said it!
Naturally, the characters of Ben and Polly feature in a number of audio adventures and books and even had cameo appearances in comic strips. It is established that they later married after leaving the Doctor but separated after some time.
So, there we have a brief televisual history of Ben and Polly. The Sailor and The Duchess. A match made in heaven!

A Brief Introduction to Ben Jackson and Polly Wright

by Simon Mills time to read: 4 min
Fandom Animating Power of the Daleks & Beyond: What W…
Features The Making of the Second Doctor
2
%d bloggers like this: