The wealth of Doctor Who merchandise on offer can be a tad intimidating for anyone looking for Christmas gifts for fans. So this week, allow us to take a tour through a virtual world of potential presents – from stocking fillers to more expensive, major items.
When you think of Christmas, you automatically think of those childhood toys and games that you ripped open on 25th December. But action figures aren’t confined to the young: all ages can enjoy them. Here’s a small selection of Doctor Who toys and games ideal for the festivities this year… As soon as this was announced, it shot to the top of many fans’ wishlists, and rightly so!
Made by Underground Toys, a similar collection, also in a TARDIS box, was released a few years ago; this one, however, includes Peter Capaldi’s Twelfth Doctor and John Hurt’s War Doctor, and variations of the Doctors’ outfits. We’ve a good selection, with some surprising (but pleasing) inclusions:

It’s a limited edition, numbered collection. Right now, it’s exclusive to Toys ‘R’ Us in the UK, but is available elsewhere in America. 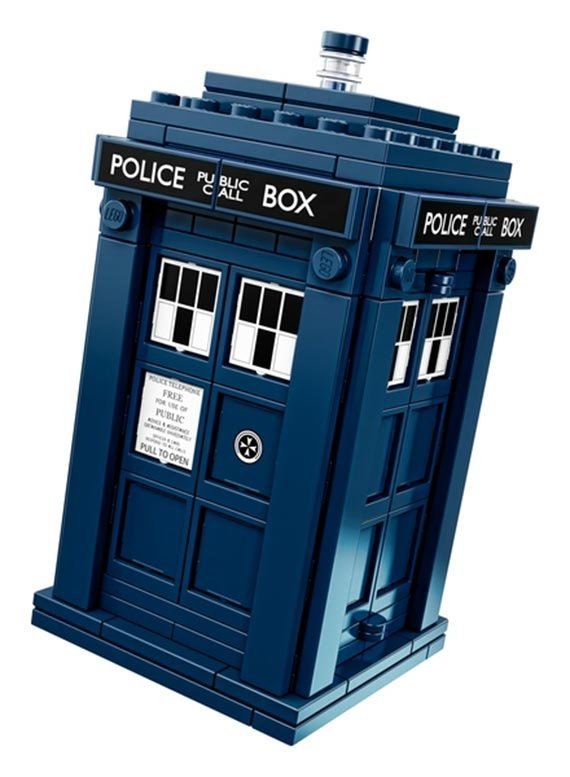 LEGO is huge. It feels even bigger when you step on it. This Doctor Who set is bigger on the inside too.
There are a few people at the DWC with this set, so we can certainly recommend it. The LEGO brand is known for its quality, but is most synonymous with absolute fun. This lovely package will be well received, and of course will eat up the recipient’s time – every minute will be a joy though!
The set is particularly apt for Christmas as it’s based on The Time of the Doctor (2013); love the episode or loathe it, it’s a perfect fit as it means you get the TARDIS exterior and console room, two Daleks, a Weeping Angel, and Clara. Plus, of course, the Doctor. That’s the Eleventh Doctor in his tweed, plus the Twelfth Doctor in the purple suit he wore during the Christmas 2013 special. You could swap Capaldi’s head with Matt Smith’s and so get the Eleventh Doctor’s Series 7B look too! Sorted.
It’s RRP is £49.99, but you can sometimes find it for around £30 from some retailers.

The Day of the Doctor Collector Set 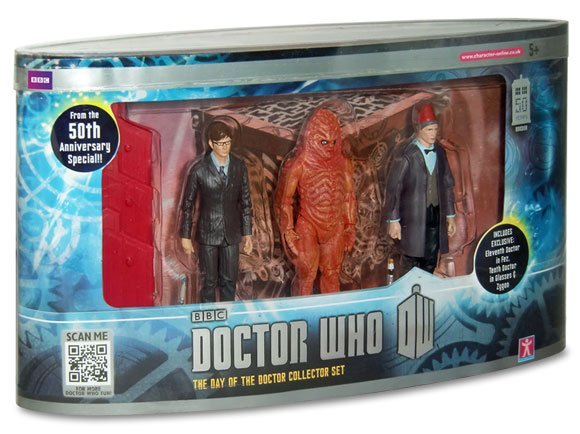 Remember how glorious 2013 was? If 2016 was a year of disappointment, with only The Return of Doctor Mysterio screening this year, 2013 was a year of abundance. At its centrepiece: The Day of the Doctor, named the best serial ever by Doctor Who Magazine.
The Tenth Doctor met the Eleventh, and the War Doctor took us back to the Time Lord’s darkest hour – and was redeemed. Also: Zygons!
This small collection of action figures isn’t perfect, purely because the figurines themselves are of the disappointing 3.75″ variety; nonetheless, it’s a good deal, as you get the Tenth Doctor, wearing glasses, a cool Zygon, and the Eleventh Doctor, with sonic screwdriver, and topped off with a fez.
Its packaging is neat and right now, it’s less than £5 from Toys ‘R’ Us (also an exclusive to the store), so is a fantastic stocking filler. It’s RRP is only £9.99, so even if you’ve missed the discount, it’s a solid buy.

Doctor Who Packs by Warlord Games 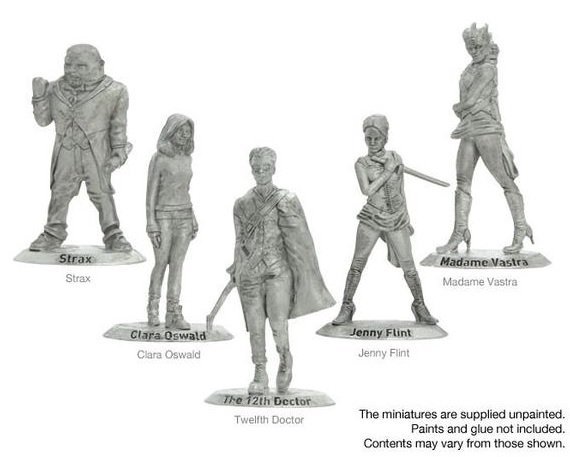 Arguably best known for their historical figures, Warlord Games acquired the official license to produce Doctor Who miniatures, made from pewter and plaster. Now, the first few sets are out and they’re wonderful.
These sculpts feel deliciously old school, but the models so far are all from the 2005- present series, and their prices range from £7.99 to £19.99. The higher price point is for either The Tenth Doctor and His Companions or The Twelfth Doctor and His Companions; the latter includes a rock ‘n’ roll Capaldi alongside Clara and the Paternoster Row gang (so yes, you technically get a Sontaran and Silurian), while the former… Well, you get Wilf! Okay, the set also includes Rose, Martha, and Donna, all awesome, but you can’t be a saluting Mr. Mott at Crimbo.
The Zygon pack is just £7.99, and sets of the Judoon and the Silence are £11.99 each.
Further releases likely won’t arrive in time for Christmas, but it’ll be worth keeping an eye on Warlord Games in the future for a special Cybermen pack, and – who’s have thought it?! – the Tetraps! Oh, but they look really cool.
These are great gifts for someone with a passion for Doctor Who and a love of detail as the recipient will need to paint the figures themselves, which frankly adds to their appeal. Do. Not. Blink.
The media really latched onto the Weeping Angels when they debuted in 2007’s Blink, and their return appearances in The Time of Angels/ Flesh and Stone, and The Angels Take Manhattan (among other serials) have just cemented their status as iconic foes.
Robert Harrop has been making accurate models of Doctor Who characters since 2014, and I own a few of them myself, so can definitely recommend their figures. The designs generally sell out quickly – sadly, the models of the Pilot Fish from The Christmas Invasion and a Great Intelligence-controlled snowman from, uhm, The Snowmen are out of stock now – but you can still pick up some reals gems.
This Weeping Angel stands out in particular: any fans should open it with joy and horror. After all, that which takes the image of an Angel becomes itself an Angel…
Of course, there are loads of toys and games perfect for fans; these are just the tip of the iceberg. So which are you hoping for this Christmas…?