Reviewed: The Power of the Daleks DVD

It may have been the year of Brexit and Trump but the biggest surprise of 2016 in the world of Doctor Who may well have been the announcement that The Power of the Daleks was to get the animation treatment in this, its 50th anniversary year. Following the release of the long-delayed The Underwater Menace in 2015, seemingly through the gritted teeth of a reluctant BBC Worldwide which had to be shamed by the fans into putting it out, it had appeared that classic era Doctor Who had had its day on DVD. With all existing episodes now available and sales of the format in decline, few could have expected to see another story on the shelves unless another significant find emerged…
But Doctor Who has a habit of coming back against the odds and what a treat it’s been, in this otherwise Who-less year, to be able to experience a story long missing from the archives, painstakingly recreated in animated form.
There’s always a tinge of sadness in viewing these recreations; mixed with the admiration one feels for the animators hunched over their desks for many a long hour, it’s impossible to quell the feeling of sadness that they had to bother. Such are the consequences of a short-sighted decision decades ago, however, and we should be thankful that the programme attracts the level of dedication and enthusiasm to warrant this kind of treatment – there will surely be fans of other series which suffered a similar fate to early Doctor Who who would kill to see their favourites handled with this kind of care and attention. 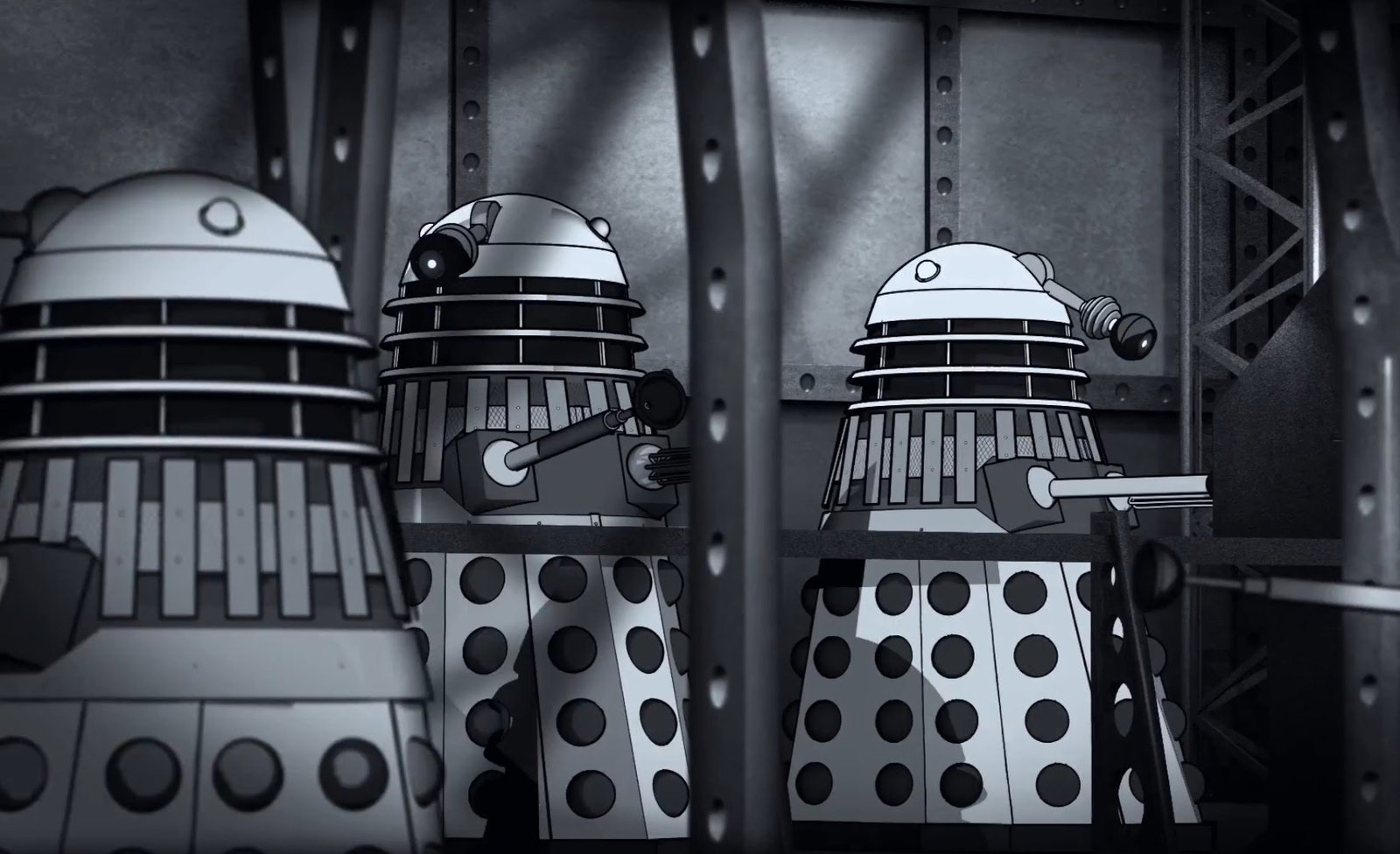 Animated Doctor Who isn’t to everyone’s taste but the production team, working against the clock to deliver that all-important November release date, deserve huge credit for their work. They have been helped by the fact that Patrick Troughton had such a characterful, expressive face and it must have been an animator’s dream to have a go at the Daleks; after viewing this I am now convinced that Terry Nation would have had more success in launching the Daleks in their own series if he’d gone with the likes of Filmation to put Skaro’s finest into a cartoon rather than the live action show he wanted. The animators here wisely concentrate on close-ups where possible, aware that the results are less impressive when we see full-length characters moving.
And it was surely a sensible decision to produce the animation in widescreen rather than the 4:3 aspect ratio of the original.
James has enthused elsewhere about how the soundtrack combines with the animation to provide a tight, claustrophobic story that presents the Daleks at their most cunning and devious. I’ll add a special mention for Robert James’s mesmerising performance as Lesterton, beautifully captured by the animation team who seem to relish illustrating his descent into madness. If it’s any recommendation, I watched the whole story in one sitting – something I often find beyond me with stories of this length.
DVD Extras:
Power is a Doctor Who story that can be experienced in many forms and fans may be feeling a little irritated at being asked to triple-dip on the animated version (download, DVD, and colour version on Blu-Ray). The package presented here is far more comprehensive than any of us would have anticipated after The Underwater Menace, however (yup, that again…). The telesnap reconstruction is a welcome inclusion and makes you wish someone had thought to include these on earlier releases. Stalwarts of the DVD range get to make what must have been an unexpected further contribution to the range – Andrew Pixley provides his usual level of in-depth research in the production notes booklet and Toby Hadoke brings his chairing skills and impressive recall of actors to the commentary track.
The ‘Making of…’ documentary uses some interviews shot for other releases and suffers from the inevitable sad truth that many of those involved are no longer with us. Among the mini-curiosities included on the disc are animation test footage featuring actors running through key movements in silence to help the animators get their drawings right, studio recordings of a Dalek voice session, and a newly restored title sequence, remastered in HD. The photo gallery is particularly extensive, running to 15 minutes and including images from the original production and also artwork from the animation.
The pick for me, though, is the surviving footage – not that there is much of it, sadly. What we do have comes in the form of a trailer for Troughton’s debut episode, some short clips from the story used on other programmes, and a few brief sequences shot directly from a TV screen by an Australian viewer on 8mm cine film. There’s something haunting about these last clips, short and fleeting as they are, that emphasises the loss of Doctor Who’s missing episodes. Mercifully, the list is shorter than it was and will hopefully reduce further but we know that there will always be some that are out of reach – we may glimpse snatches of them but will otherwise have to rely on the sterling efforts of those who produced this recreation.
Long may it continue when the results are as compelling as this.

Reviewed: The Power of the Daleks DVD

by Jonathan Appleton time to read: 3 min
Big Finish Reviewed: Doctor Who – A Life of Crime
Reviews Reviewed: Class – Co-Owner of a Lonely Heart…
0
%d bloggers like this: