Promising so much and keeping just as much close to its chest, Class is at the halfway mark and Co-Owner of a Lonely Heart has the feel of a season finale.
Stretching its format after the pleasingly on-point Nightvisiting – where the high concept was matched perfectly with the burgeoning relationship dynamics between the classmates – not everything works this time around; the plot which leaves a lot of the heavy-lifting to its accompanying part, feels a little thin and rather over-burdened with wheel-spinning storylines rather than satisfying conclusions.
However, the idea is a strong one – perhaps it’s the show’s key idea. The notion that, underneath the outlandish fantasy (some of which it may or may not have borrowed from other shows) Class retains its power by treating the emotional issues with the same importance as the fantastical ones. Exploring the world of its young audience through finding that key kernel of empathy and humanity. Though it’s early days and the show is still finding its feet, the USP of Class is that it’s emotionally honest and sincere. Hold on to your hats but it’s probably worth pointing out that these are not real life teenagers; these are noble, warm-hearted, supportive, telegenic teenagers – they’re role models defined by their inner strength.
And none of them possess more steel than April.
We’ve already been warned about the war enraging behind the sweet, sensitive side of April (Sophie Hopkins), so entwining her existence through a shared heart with Corakinus, the warmongering lord of the Shadow Kin, adds a little shade to what felt rather rushed in the breathless first episode.
As Corakinus looks to consolidate his power after being weakened by the connection to April, a fire burns inside that threatens to consume her. However, it isn’t just mood swings and bouts of aggression which exact a physical and psychological toll. There’s also a set of dangerously alluring powers to content with too, such as enhanced strength and the ability to summon some rather deadly shadow blades. 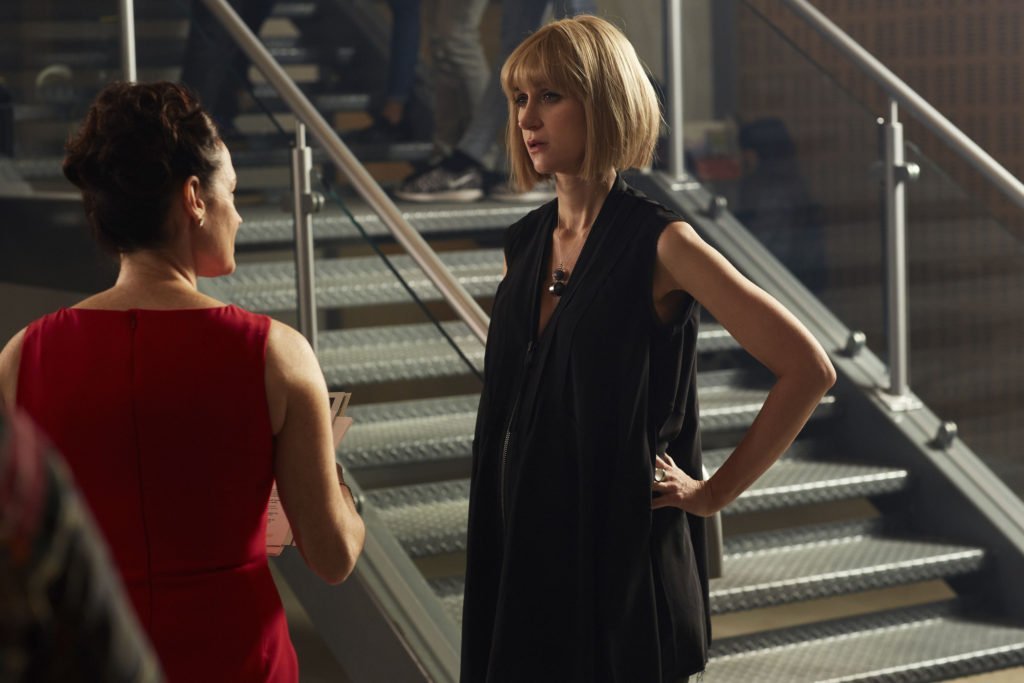 With April in such an emotionally precarious state – where every flutter of her shared heart may be the last thing she feels – now wouldn’t exactly be the perfect time for her estranged father to make an unwelcome appearance after a lengthy prison spell. I say an appearance, but he’s largely an exacerbating threat in the opening scenes: it’s this omnipresent fear of opening old wounds and April’s prickly mood that ultimately serves to drive a wedge between her and all that stand beside her.
Everything is being manoeuvred into position but there’s very little impact and a sense that events are being held back for the concluding part. The result is that the episode feels uneven as it lurches from comedy to romance and then to high-stakes drama. Class tends to operates at a hundred miles an hour – no sooner has it grasped an idea, it’s attention flits quickly to the next. Some ideas retain an impact, others merely bounce off the speeding narrative; leaving curious dents rather than providing us with a pivotal jolt.
Even the intriguing subplot, which serves to gently remind us that there’s a darkness to Charlie (Greg Austin) and Quill’s (Katherine Kelly) relationship while bringing his burgeoning romance with the doomed Matteusz (Jordan Renzo) to an impasse centred around the cabinet of souls, doesn’t feel as important as it does necessary. The character of Charlie has felt somewhat of a comedy ‘fish out of water’ archetype – albeit one who’s inherent alien qualities have been twined with his position as a prince (again, something fantastical through something relatable, in this case, putting the class in Class) – but here we get a taste of his questionable decision-making skills in regards to his treatment of Miss Quill.
For once, we’re able to question one of our main character’s judgement – okay, we can kind of see how this will pan out – but it’s a necessary shade of grey that adds a little something to what has already been established.
The other big threat this week is the near-constant presences of carnivorous blossom. Though the true threat is being held back until next week, it’s a wonderfully creepy idea which, fingers crossed, has some very Wyndham-esque potential. Here’s hoping for the Class version of a classic ’50s sci-fi invasion story.
It remains to be seen whether Co-Owner of a Lonely Heart sticks the landing – and there’s a fair sense that the episode will probably feel more cohesive once we reach the finale – but for now the episode feels both filled with glorious potential and curiously unsatisfying at the same time.
The first series of Class is available to pre-order now for release on January 2nd from Amazon for £17.99.