Reviewed: The Return of Doctor Mysterio

As the Doctor says, time passes for everyone. Sometimes, it goes really slowly. Sometimes, it speeds away too fast. Often, they’re one and the same. It just depends on perspective. To River Song, 24 years on Darillium sounded a long time, certainly a better prospect than what she was dreading – an imminent trip to the Library. But 24 years isn’t that long, not really, and definitely not once River actually sets a course for her demise. In The Return of Doctor Mysterio, we join the Doctor after he’s taken some time away from saving the Earth, and didn’t it just fly by?
Similarly, waiting 12 months for the next episode of Doctor Who seemed an awfully long time after the conclusion of The Husbands of River Song. The time dragged along, but hey, in the end, didn’t it just fly by too?
The Return of Doctor Mysterio‘s timescale is relatively short – it’s not long between Lucy Fletcher’s (Charity Wakefield) first meeting with The Ghost (Justin Chatwin), and them sitting down to dinner, and ultimately learning who each other really is – but the whole narrative is, appropriately, all about time. Harmony Shoal is in it for the long haul. The Doctor figures out the ideal time to stop them. The whole episode feels like a fusion of superheroics (comics and movies) in the 1970s, and now. It promises a lot for the future of Doctor Who, but mulls over the series’ past, with an unusual premise that nonetheless harks back to previous episodes.
When it comes to the alien incursion, we’ve seen a lot like this before. A faked invasion to cause panic, when the aliens are actually already on Earth, is pure Aliens of London/ World War Three; a reactor core set to wipe out a vast number of people recalls Voyage of the Damned; the aliens’ body horror gimmick is exactly the same as in last year’s Christmas special; and the visuals are reminiscent of The Bells of St. John. Then there’s the disembodied brains, complete with eyes! The obvious point of comparison is The Keys of Marinus, but let’s not forget The Brain of Morbius, Planet of the Ood, and Time and the Rani either.
This is, by no means, a criticism: there are over 800 episodes of Doctor Who, and, as they say, the wheel turns. Plus, use of these tropes is on purpose. It helps the story. One such reason is because otherwise, this isn’t like any other Doctor Who story. The Doctor’s been away. In the meantime, Earth – or at least New York – has been looked after by The Ghost, a hero – but he’s… super.
The Doctor isn’t Spider-Man. He’s not Wolverine, Batman, Superman, or Moon Knight. He’s no Howard the Duck either. He’s the Doctor, and he is a hero. Nonetheless, The Ghost is a superhero. While the Doctor uses his brain, and whirls around a flashing screwdriver, The Ghost has super-strength, X-Ray vision, and can fly. This is different territory for Doctor Who. It makes sense for the rest of the episode to feel familiar.
Yet there’s something familiar about The Ghost too – or more specifically, his secret identity, Grant (strangely not gifted with a surname). The Doctor drops in, Father Christmas-like, on a young Grant, alters his life, and catches up with him many years later. There’s a touch of A Christmas Carol there, but more than anything, it’s Amy all over again. Similarly, it’s Ashildr, although Grant is more likeable than the latter.
It means that the audience understands Grant fairly easily, helped by the fact that he, just like everyone ever, has been in love with someone for some time, but that person knows nothing about it. We can all relate to that during some period of our lives, right? When that love interest is Charity Wakefield, it’s even more understandable. Lucy is an interesting one. She’s certainly cut from the same cloth as previous characters: a touch of River Song, a dash of Madame Vastra, a smidgen of Liz Ten, even. But I maintain she’s companion material. I like her fieriness, how clever and intuitive she is, and how she handles small, important, quiet moments. There’s a strength to her – perhaps born from looking after a baby on her own, while also juggling a career, in an alien-infested city that never sleeps – but also a contemplative calmness; as an investigative journalist, we can naturally draw some comparisons with Sarah Jane Smith…
Instead, we have Matt Lucas’ Nardole as the Doctor’s companion. He was always going to be a divisive character, but maybe the chasm won’t be so great as he proved to be pretty good. Not ideal, but okay. This isn’t really down to Lucas: it’s the nature of Nardole, someone conceived as a one-off before being promoted to full-time-traveller. The nagging feeling that he’s not meant to be there, in the TARDIS, isn’t helped by the fact he doesn’t really get to do very much (apart from bluntly informing the Doctor that New York isn’t a capital city, and thus tipping the Time Lord off about the alien plan).
Still, that’s the case with a few companions. Quite often, on a whim, a producer would decide someone should become a regular. Most of those companions proved to be excellent. Nardole’s already improved, showing greater depth especially in that final speech about the Doctor. But he’s still basically the light relief. I’ve been arguing that Doctor Who needs some light to counteract the dark, but I already got that – in Peter Capaldi’s Series 9 Doctor. It’s like, come Last Christmas, the production team remembered that Capaldi was in The Thick of It, that he could excel with comedy. So is Nardole needed…? We’ll just have to wait and see. I definitely wouldn’t complain if Lucy were added to the regular roster though.
It’s ridiculous to think that Lucy immediately falls for Grant after he reveals he’s also The Ghost, because that’s not what happened. The Return of Doctor Mysterio isn’t the story of “boy gets girl”; it’s of “girl finally realises she loves the boy too”. Yep, it’s taken her a while, but in that rooftop scene interviewing The Ghost, it clicks.
The off note in this is how Grant, despite knowing her for 24 years, still calls her “Mrs. Lombard” (in a completely unrelated matter, that’s such a great Agatha Christie-esque name!). Sure, you could say that’s professionalism, but it simply doesn’t gel.
That’s just one of several niggles, however. The Ghost’s costume ticks every box it should, but is nonetheless utterly naff. It’s bullet-proof but looks like cheap plastic. I also hate to see anyone flying in Doctor Who because it, equally, looks naff. They can never really sell it. Sometimes, it looks like that bit in The Itchy & Scratchy & Poochie Show where the latter tells them his planet needs him, and his cel is unceremoniously shunted off screen.
(Director, Ed Bazalgette handles it well, fortunately; the Doctor clinging onto Grant’s legs in the pre-titles sequence is shot up-close, so it’s not too painful, while the other instances of flight are typically homages, a naffness you can forgive because it parodies the 1970s approach. The Return of Doctor Mysterio‘s visuals are very different to Bazalgette’s previous Doctor Who stories, The Girl Who Died and The Woman Who Lived; instead, he employs the same sleek style as he used in Class, making him a dependable and interesting director for the lead show.) 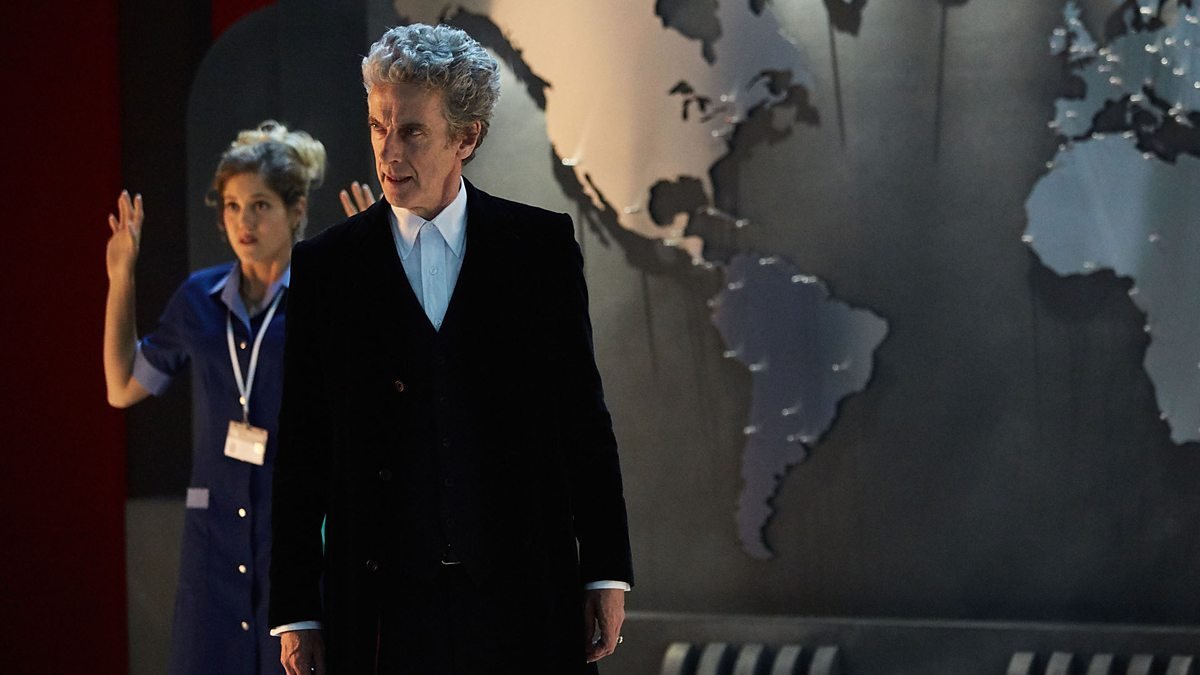 The core niggle, though, is having a superhero in Doctor Who. It never feels a comfortable fusion, for some reason. Then again, maybe this is how viewers felt when the first alien appeared in a historical. Are there fans put off the Sontarans for life because the jolt of seeing one in the Middle Ages was too much?
At the end of the day (Christmas Day, no less), The Return of Doctor Mysterio is a fun instalment with lots going for it, but also lots of niggles. We’ve mulled over one reason why the aliens’ plan needed to be familiar, to hark back to other serials, but the other reason must surely be because it’s Christmas. This special was largely devoid of the festivities, but its tone was spot-on. That’s what Christmas is, isn’t it? The whole week between 25th December and New Year’s Day is about looking at the past and into the future – which is a very Doctor Who concept.
At its heart, The Return of Doctor Mysterio is stuck between times, and that, perhaps, is its greatest niggle, albeit a necessary one. Right now, it feels displaced; not part of Series 9, but equally separate from Series 10. All that is in the future. To properly evaluate The Return of Doctor Mysterio, we need to see where we’re heading. We need more context.
For now, the episode accomplishes what it sets out to achieve: an upbeat number that highlights the most important thing of all. At long last, the Doctor is back.

Reviewed: The Return of Doctor Mysterio

by Philip Bates time to read: 6 min
Doctor Who on TV Reviewed Reviewed: The Pilot
21
%d bloggers like this: