There is a bit in Shakespeare In Love where Joseph Fiennes is taking a river taxi up the Thames. His driver – all right, boatman – is none other than The Fast Show‘s Simon Day, just one of a host of blink-and-you’ll-miss-it cameos by established British luvvies all queuing up to make their mark, solidifying the reputation of Stoppard’s masterpiece as the Harry Potter of its time. Shakespeare is anxious, distracted, and worrying about Colin Firth. The last thing he needs is the boatman turning round in his seat, thrusting a manuscript in his face, and saying “I’m a bit of a playwright meself. It wouldn’t take you long to read it…”
Shakespeare In Love is full of such moments. Shakespeare reels off accidental innuendo to his psychiatrist with a candour that would make even Freud blush. Queen Elizabeth has a conversation with a young John Webster, who proclaims “I liked it when she stabbed herself, your Majesty.” And another boatman recollects, “I had that Christopher Marlowe in the back of my boat the other day”. Oh, there is plenty of romance and court protocol and references to ‘sport’, even if the script is not as immediately quotable as some of Stoppard’s theatrical work. Nonetheless, where the film excels is its dry, fourth-wall-breaking observance of contemporary arts culture, as viewed through Elizabethan eyes. Watching The Shakespeare Code, not quite a decade later, it’s hard to avoid the conclusion that Gareth Roberts took his cue from Stoppard. Because this is a story that is not only unavoidably, but quite deliberately post-modern. It’s not a story in which the Doctor and his companion meet a famous author who has a comparatively passive role in events (hello Timelash, pull up a chair and have a macaroon). It’s actively about said author, with their unique abilities an essential skill set when it comes to dispatching the monster of the week. It’s a stunt Roberts would pull again (and arguably more successfully) the following year, in The Unicorn And The Wasp. (Myself, I’m waiting for the closing instalment of the trilogy, in which the Doctor fends off giant mutant cockroaches in Prague with the help of a young Franz Kafka.)
But The Shakespeare Code is chock full of nods to the present day, with Shakespeare himself straddling the line between inspired genius and stand-up comedian, flaunting his ambiguous sexuality one minute and modelling his trademark ruff the next. He is moody, prone to bouts of procrastination, and occasionally downright lecherous (“You should never meet your heroes,” Martha sighs as the playwright banters with his audience, declaring “Oh, that’s a wig”). He’s also tremendous fun to watch, largely thanks to Dean Lennox Kelly’s uproarious performance, but at least in part because both Roberts and the creative team have the good sense to make Elizabethan London as raucous and bawdy as it probably was – an insight that occasionally gets lost in the clinical, sanitised productions we all had to watch at school. This is a culture in which sex was celebrated, and we’re never allowed to forget it.
The gags roll thick and fast. Maps are hopelessly unreliable. Shakespeare complains about political correctness when confronted with the word ‘blackamoor’. The Shakespeare Code doesn’t only make nods to contemporary culture – it actively points them out, as the Doctor and Martha wander streets that, the Time Lord insists, are “not so different from your time”. Indeed, the only people in the story who actually speak like they’re in a Shakespeare play turn out to be aliens (Martha herself has a go, only to receive a trademark “No, don’t. Don’t do that”). That’s not to say the playwright’s trade is ignored. This is as much a story about theatre (and Shakespeare’s legacy within it) as The Unicorn and the Wasp is a story about Christie’s observance of the human condition – an understanding that provides the key to solving the murders that plague the Eddison residence. 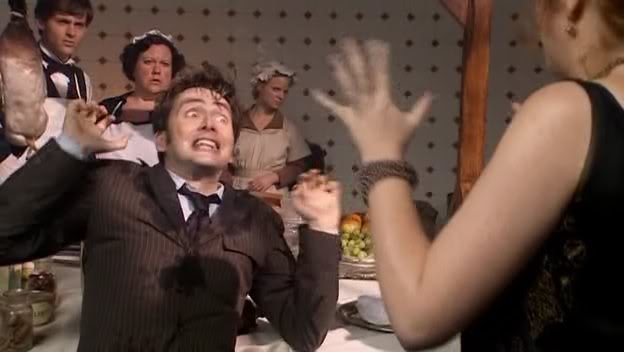 There’s more than one way to skin a cat, but it’s curious that NuWho seems to have got into the habit of taking an axe to historical authenticity, at least when it comes to dialogue. Part of it is a reaction to the classic series, in which writers made a point of taking historical stories relatively seriously, at least in terms of their setting and characterisation, leaving the social commentary and political analogies for the off-world colonies and alien planets. It’s an approach that worked brilliantly in the 1970s but times have changed – and so, it seems, have audiences. Hence the 21st Century historical story is all too often delivered with a colloquial flair – or, at the very least, an ironic, Quantum Leap-style nod in the direction of the audience.
We might blame the TARDIS translator. It may be sentient and telepathic, but even the best interpreter has its limits. It’s never clear, for example, how characters are able to communicate with any fluidity, given that a sentence that would take seven seconds in English but which would take, say, ten in German is delivered with no apparent discrepancy between the person who speaks it in English and the person who hears it in German. Does this mean that everyone is experiencing things at slightly different rates? Or does the TARDIS think “Oh, sod it” and translate both sentences into something in the middle that the audience can understand – with the Dalek voice circuits in The Witch’s Familiar serving as a crude prototype? For years we’ve been ascribing habitual colloquial dialogue to a writer’s whims – what if there’s a simpler, in-universe explanation?

It’s notable that when the show doesn’t do this, it runs the risk of failure – although it’s sometimes difficult to pinpoint why. Victory of the Daleks is a ridiculous narrative told with absolute sincerity; so too is The Doctor, The Widow, and the Wardrobe, but one is dismal and the other is glorious. Toby Whithouse clearly set out to emulate the vibe of The Gunfighters (only with better accents and a more convincing set) when he knocked off A Town Called Mercy – a story in which most of the town’s inhabitants speak like they’re in a western, and come across as thoroughly uninteresting as a result. That may in itself give some clue to what’s going on: we’ve been so swamped with supposedly authentic costume drama over the years that when Doctor Who does it, it’s just not very inspiring. There are exceptions: the somewhat anomalous success of Vincent and the Doctor, for example, may be attributed to the fact that we are given a serious portrayal of the tragic artist, as opposed to the raving, one-eared comic performance that we might have expected.
More anomalous still is the Girl Who Died / Woman Who Lived two-parter: a story that succeeds until its midway point (to be precise, as soon as Ashildr glowers at the camera) and then collapses within a wave of self-indulgent philosophical waffle, until the end scene, in which Rufus Hound does a stand-up routine on his way to the hangman’s noose. It’s a jarring, unnecessarily meta moment that feels more like the fulfilment of a contractual clause than something that Catherine Treganna put in because she thought it would work. The Vikings in The Girl Who Died are also suitably ridiculous – and so anachronistic they’re on the verge of ripping a hole in the fabric of the universe – but they get away with it because the episode contains a grandiose sense of tragi-comedy that its cerebral follow-up lacks. (Maisie Williams’ first episode was the only time her character worked; it is for that reason that I refuse to call her anything except ‘Ashildr’.) Key scenes in The Girl Who Died, of course, hearken back to The Fires of Pompeii – an episode that borrows from Classic Who on a number of levels, whether it’s the recurring visual motif of the Sisterhood of Kar- sorry, Sibylline Sisters, or the grandiose performance of Phil Davis. Lucius is often accused of being rather one-dimensional, but it’s hard to bear a grudge at someone who sneers with such simmering malevolence, even if that’s pretty much all he does. Certainly his battle of words with the Doctor recalls the heyday of Tom Baker, while the arm in the jacket is straight out of The Ark In Space. Nods to Hinchcliffe aside, Pompeii is a story that skates the line between meta and authentic (Capaldi’s poetic lament for the fall of his home is one thing; having him affect a Welsh accent to speak to Donna is quite another) but which succeeds precisely because it is so overblown: an eruption of frustrated sorrow and rage to mirror the boiling torrent of lava that engulfs the town.
Do we have an improved show for such dalliance with silliness? Or is it better when writers stick to the self-righteous patriotism of The Idiot’s Lantern, or the British reserve of The Crimson Horror? There’s more we could do with this, but I’ve had a long week, so I leave it to you to categorise the others as you see fit – or, should you so desire, tell me the ones I got wrong. Still, it’s a talking point, even if the sentences may be different lengths and some of the gags years ahead of their intended audience. The First Doctor insists that “You can’t rewrite history… Not one line”. And he’s basically correct – but at least you can still put a few jokes in.

by James Baldock time to read: 6 min
Features Pirates, the Universe, and Everything: The Pirate …
Features Doctor Who's Past is Often Better than its Pr…
1
%d bloggers like this: