Pirates, the Universe, and Everything: The Pirate Planet is Douglas Adams' Masterpiece

The phrase, “Polyphase Avatron” will get spellchecking software the world over in a tizz. As will the word “tizz”. To Doctor Who fans, it is the name of the cybernetic parrot perched atop the shoulder of Bruce Purchase’s Captain in the 1978 story, The Pirate Planet (and very briefly visible in that wonderful 50th anniversary trailer). To fans of one Douglas Adams, it’s a phrase that could be considered “inspired by” or “in the style of” because as we know, there are a large number of Douglas Adams aficionados who deny Doctor Who. As far as they are concerned, he was a bit skint and wrote two stories – they don’t even brag that one of the stories was City of Death, the story with the highest audience figures). What this implies is that fans of the The Hitchhikers’ Guide to the Galaxy and Adams’ other work are terrible snobs. I know this because as we all know, The Pirate Planet is excellent.
Searching for the Second part of the Key to Time, the Fourth Doctor (Tom Baker) and Romana (Mary Tamm) attempt to land on the planet Calufrax, only to discover that something is blocking the TARDIS’ materialisation. On the second attempt, they manage to land – only the planet isn’t Calufrax, despite the co-ordinates being correct! Few writers can simply and without pretence weave into a script: space-hopping hollow planets, cybernetic parrots and their cyborg owners, telepaths, time dams, and keys to time. Adams manages this and more.
Rich with mineral names such as Oolion, Voolium, and Madranite One-Five, planet names like Calufrax and Bandraginus V, and characters called Pralix, Kemus, and Mr. Fibuli, The Pirate Planet stands out as an example to all first-time television scriptwriters. Of course, Douglas Adams wasn’t just any old writer, but that’s beside the point. 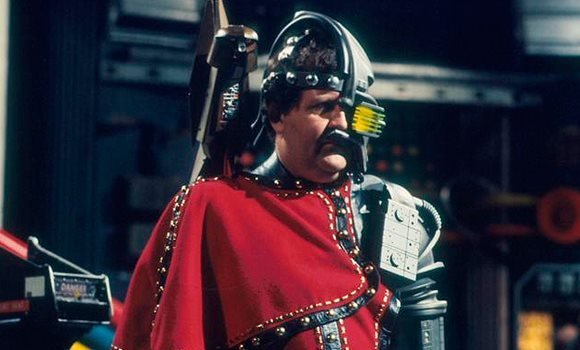 While writing The Pirate Planet, Douglas Adams was also writing the first Hitchhikers’ Guide to the Galaxy radio serial. I like to think that I would be out on the lash celebrating upon being commissioned for a Doctor Who script alone, let alone a six-part radio serial as well! How Adams managed to complete either is a mystery to me; yet 26 years later, both stand out as major organs in an outstanding body of work.
So you are Graham Williams, and you’ve been trying to get the concept of the Key to Time off the ground for a couple of years. A first-time television scriptwriter is writing a story for your show. This scriptwriter is working on your show, a radio script, and producing a topical comedy show for Radio 4. He delivers the script slightly late, you break your leg, and the script editor has to take over your duties. Despite all of this, a cracking script is both delivered and realised.
While searching for the Key to Time, the Doctor, Romana, and K9 (John Leeson) discover that this new planet has a strange secret: everyone is phenomenally rich. Gemstones are found on the street. Adams neatly sidesteps the fiscal issues he raises and takes us to the heart of the secret. The Captain and his assistant Mr. Fibuli are piloting the (unnamed) hollow planet through the cosmos, searching for particularly rare elements; they are mined from planets that they materialise around. At one point, the Doctor is shown the Captain’s “trophy room” of the shrunken remains of planets, such as Calufrax:

Captain: “I’m gratified that you appreciate it.”

Doctor: “Appreciate it! Appreciate it?! You commit mass destruction and murder on a scale that’s almost inconceivable and you ask me to appreciate it! Just because you happen to have made a brilliantly-conceived toy out of the mummified remains of planets.”

Captain: “Devilstorms, Doctor… It is not a toy!”

Doctor: “Then what’s it for? Huh? What are you doing? What could possibly be worth all this?”

The Captain was in fact maintaining the dying seconds of the tyrannical Queen Xanxia’s life, who in extreme old age was suspended behind Time Dams. Rarely had serious, considered, and realistic science blended with intelligent humour been a part of Doctor Who, a theme that would run through Douglas Adams’ association with the show.
https://www.youtube.com/watch?v=KKLy6BruMyg
While notable for being a season-long story arc (a revolutionary concept in 1978), Williams’ Key to Time concept also marks the point at which Tom Baker’s eccentricities began to get the upper hand; it’s fair to say, however, that he was at his peak at this time. Whether intentionally or not, Adams’ natural leaning towards sci-fi mixed with humour encouraged Baker to begin breaking the fourth wall (though not to the same degree was Hartnell’s famous Christmas message, or anything you’ll see Deadpool doing) and consider talking rocks as companions.
A drastic change in the tone of the show was soon apparent – there would be no dark gothic horrors thanks to orders from upstairs and pressure from Mary Whitehouse and the National Viewers and Listeners Association. Douglas Adams became script editor of Doctor Who, marking a drastic change in the tone of the show that was perfect for the time. Doctor Who was heading for its most successful period, one fondly remembered the world over.
(Adapted from an article originally published on Kasterborous in May 2005.)

Pirates, the Universe, and Everything: The Pirate Planet is Douglas Adams' Masterpiece