Doctor Who's Past is Often Better than its Present

This week on the DWC, we’re examining history within Doctor Who, and it’s always a good time to look at the show’s past itself. As a series about time travel, it’s apt that Doctor Who feels very current while frequently looking at the past; its future, too, is an exciting, if scary, prospect. You might argue that Doctor Who exists across time, if you’re that way inclined.
Steven Moffat recently said:

But this is something I’ve been thinking about for a long time. Because we’re a fandom that both relies on change (we wouldn’t be here at all if regeneration weren’t a thing), and also very resistant to it. These days, you’d call this “head cannon” – that you’re happy with some change, but only if it fits how you think of the programme in your mind.
This is especially relevant right now, when rumours of a female Doctor are rampant. Fandom is split, and not necessarily just into the camp who’d like a gender swap and those who don’t. It doesn’t suit many people’s “head cannons” for the Doctor to be a woman – not because such fans are sexist (indeed, most women I’ve talked to hate the idea of a female Doctor), but because it would change things too much.
And this is why Doctor Who then is just as good, if not better, than Doctor Who now. 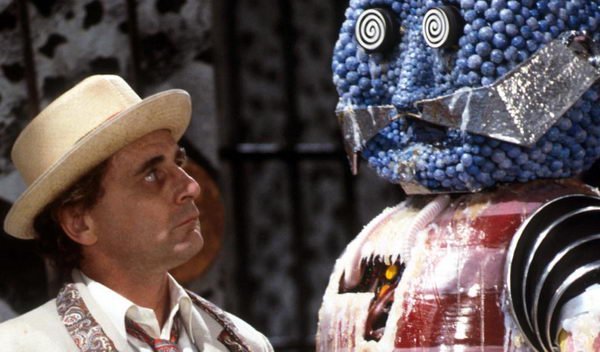 We can find comfort in it. It’s safe. Sure, there are plenty of serials that challenge our perceptions of things: The End of Time tells us the true anguish the Doctor goes through when regenerating; The Reign of Terror shows the real horrors of humanity; and The Happiness Patrol makes us question the media and the nature of emotions. That’s just a small sample – there’s something interesting to look at in every serial.
Nonetheless, these stories are safe simply because they’ve already happened, and they’ve not changed Doctor Who. Few things actually do. Regeneration did. Learning about the Time Lords and Gallifrey did. The Time War did. But it’s still recognisably the same series we know and love.
Similarly, you can forgive a so-called “bad episode” if it’s been and gone. You might even rewatch it in a new light; your expectations have been managed by then. You know what’s coming and you can appreciate it more. When Doctor Who is now, fandom generally lives in a pretty constant state of excitement. You get your hopes up, and that’s only natural.
Often, your expectations are realised. But then you see something that jars, something that lets you down just too much. The first time I really felt this was Last of the Time Lords. It was the first episode I immediately admitted I didn’t like. I’d had serials I wasn’t as keen on, but my expectations were high (I don’t know why: the previous week, I’d hated the aging Doctor), so this was too great a disappointment.
Now, it’s happened, and I’ve accepted it. More than that, I can recognise what I don’t like, but still find a lot to enjoy – namely, I really love John Simm’s Master. The regulars are great, of course, and that Scissor Sisters scene is a, uhm, Masterpiece.
So that’s the problem with Doctor Who now: when it doesn’t live up to expectations.
Doctor Who‘s past is acceptable, and sometimes more enjoyable. The bigger issue comes when there’s something that taints the show, when it does something that affects everything. This has largely been my issue with Peter Capaldi’s era – it’s nothing, I might add, to do with the lead actor at all; it’s that the show has been doing a lot to be controversial lately. A prime example is Kill the Moon, of course. That caused a stir, and many will think it best left forgotten. While you can still enjoy The Moonbase, The Seeds of Death, and Smith and Jones without thinking about the Series 8 story, it’s certainly troubling when you realise it’s a giant egg.
These are the exceptions: when there’s something you can’t forgive and forget. For me, that’s Dark Water/ Death in Heaven – and I say this as a big fan of Steven Moffat and of the Cybermen. There are things that could happen that would put me off the show, and that’s horrible but interesting. Surely something could potentially happen that would tell you Doctor Who isn’t your show anymore. Your era of the series has passed. As I say: horrible.
You have a consolation prize, though: all the Doctor Who stories you have enjoyed. That history becomes even more precious, even if it’s tinged with sadness.
You might be thinking that you’re more than happy with change. But imagine if they changed the TARDIS. The time-space ship was stranded on Earth during the Jon Pertwee era, but it was still a presence, and it was inevitable that the TARDIS would be useable again soon. The Chameleon circuit was repaired in Attack of the Cybermen, but by the end of the serial, the Doctor realised he liked it best as a 1960s Police Box. Everybody’s got their own rules. Everybody’s got at least one thing in the show they don’t want to ever change. Because if it does, Doctor Who won’t be Doctor Who anymore. Things might change back, but there’s forever that blight in the ledger.
The future can be scary. The present can be a disappointment. The past can be rosy.
I’m not denying that one of Doctor Who‘s strengths is it’s still going on, that new stories are just around the corner. In Series 10, there’s going to be a new classic, if not more than one. There’s going to be one that you don’t like, again possibly more than one. Doctor Who now is great, but this is a time travel show: the whole show exists as one, and its past is just as fantastic as its present and its future.
Now that’s special.

Doctor Who's Past is Often Better than its Present