D’you wanna comedy? ‘Cause if you do then I should warn you, you’re gonna see all sorts of things. Burping wheelie bins; Aliens firing sick torpedoes; Anne Robinson in the 200th Century; it won’t be grim, it won’t be stuffy, and it won’t be sensible. But I’ll tell you what it will be: rib-ticklingly surprising…
With stellar names like Paul Daniels, Jamie Oliver, David Blaine, Tinky Winky, Dipsy, Laa-Laa, and Alan Rickman being touted to take over as TV Time Lord, Fandom breathed a sigh of relief when the announcement came in March 2004: ‘Shakespeare actor Eccleston reincarnated as Doctor Who,’ pontificated The Guardian, ‘Cracker Chris is the new Dr Who’ croaked The Mirror, and The Daily Mail screamed, ‘It’s Bill Nighy, idiots!’ (Which is surprising as they are usually such sticklers for accurate reporting.) Yes, Christopher E was our gruff northern number 9.
So, phew, someone had seen sense and instead of choosing a light entertainer, a mime artist, or a spoon bender for the part, they had cast a PROPER ACTOR. Cross Chris had starred in gritty films and TV dramas like Shallow Grave, Our Friends in the North, and 28 Days Later… (Oh, and Gone in 60 Seconds.) 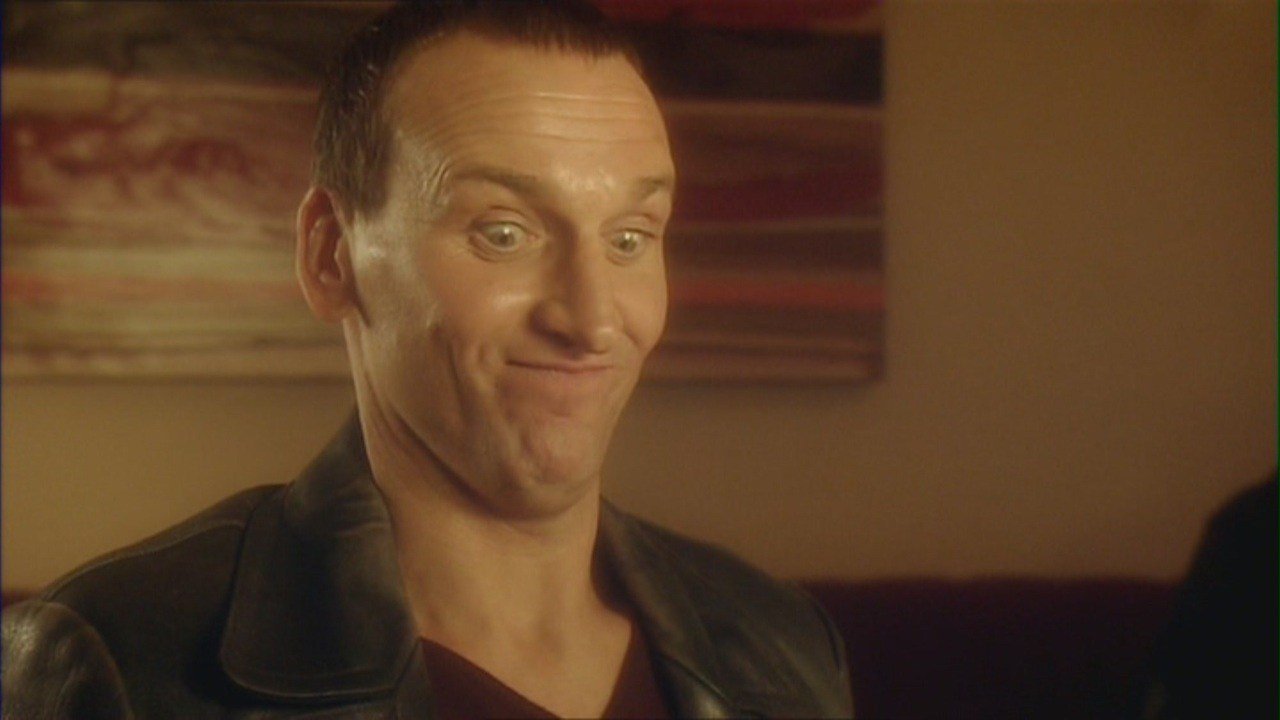 Fandom was happy. Fandom went to bed with a cup of cocoa. Fandom slept through the night dreaming about moody classics The Tomb of the Cybermen, The Ark in Space, The Caves of Androzani, and The Curse of Fenric. Then Fandom’s dozing mind wandered, fantasising about Barbara Wright alone on her TARDIS couch unbuttoning her cardigan. Button by button. Fandom awoke with a start, put the covers in the wash before Fanmummy noticed, and turned on the TV. It was 18:59 on 26 March 2005. And a legend was about to be reborn in Rose…
And – for shame! – he was a bit silly. Okay, not always silly. But he does wield a cartoon remote bomb control, get attacked by a comedy plastic arm, fire a Champagne cork into a replica man’s head, then proceed to pull the head off, then he fails to notice the bleedin’ obvious giant transmitter in the shape of the London Eye and saves the world with a handy tube of anti-plastic… It’s hardly Let Him Have It II.
And then there was a backlash. Not from everyone. Not from you or me. We’re normal. I mean I’m writing this, and you’re reading this. That’s normal; those are normal things to do. But some anti-normal fans felt Eccleston couldn’t pull off the funny bits. He was a legitimate actor, and should be straight (leather) jacketed as a northern bovver boy Time Lout, angry with stupid apes and mad for giving the Daleks a good kicking.
But the comedy continued. Yes, there were dark moments and twinges of cosmic angst. But our Doctor smiled, laughed, and danced his way through 13-future-securing adventures…

And I’m prepared to go out on a limb here and say that Christopher Eccleston is the finest comic actor to star as the Doctor (bar one). And I have evidence to prove it.
There is a noble tradition of the lead stars of Doctor Who being brilliant at humour. And there is also a custom of Doctor actors appearing alongside comedy legends, holding their own (ooh, err) and often upstaging the great and good…
Here are a few examples (and no, they’re not all suitable for childish consumption):
Peter Cushing, Morecambe and Wise, 1969

(Okay, so Capaldi’s a bit of a comic genius too…)
But, for me, Eccleston proves he’s a top Doc in comedy stakes through his appearance on The Life of Rock with Brian Pern as Luke Dunmore, a permanently miffed Madchester music producer. And it’s because Chris is such an accomplished straight actor that it works so well. Eccleston never resorts to tongue-in-cheek winks to the audience; he approaches it with a deadly seriousness that makes it hilarious. Plus he can do sweary comedy to rival Capaldi.
Christopher Eccleston, The Life of Rock with Brian Pern, 2015

Oh, and it wasn’t a typo earlier when I wrote ‘bar one’. Yes, there is one Doctor whose performance equals Eccleston. And it’s an oft-misunderstood bit of footage. Imagine, if you will, a TV show a bit like Ricky Gervais’ Extras. Produced in the ’60s, but actually funny. It’s a sitcom where popular stars are invited to appear as grotesque, exaggerated versions of themselves in reduced circumstances for comic effect. See?
So there you have it, Eccleston and Hartnell, the unexpected funniest Doctors. Still not convinced? See you in 20 minutes…

by Peter Shaw time to read: 4 min
Features Doctor Who's Past is Often Better than its Pr…
Features 6 Performances by Christopher Eccleston Worth Re-E…
3
%d bloggers like this: