Fanzines are as rare as TV shows worth watching on a Saturday night. Mainly thanks to the internet these little publications of fan-boy (and fan-girl) love have almost become extinct and consigned to memory. Then along comes what could possibly be the ultimate and finest Doctor Who fanzine, Vworp Vworp! With Volume 3 landing on doorsteps around the world, it seems the perfect time to remember the very first issue, released in 2010…
This glossy and professional looking tribute to all things Doctor Who Weekly/Monthly/Magazine is a true work of art that brings together some of the most important people that helped the magazine become such a success over its three decades of publication; the title has since expanded to include all sorts of artistic achievements, a necessary evolution, but its original format was to praise DWM. That spirit fortunately lives on. Editors, Gareth Kavanagh and Colin Brockhurst should be placed on shoulders high and paraded through packed streets and thanked personally for this. It even comes with transfers – just like Doctor Who Weekly #1, except this one features Matt Smith’s Eleventh Doctor and Karen Gillan’s Amy Pond, as realised by Paul Grist (Torchwood: Rift War; IDW’s Doctor Who)!
It’s like getting the latest edition of DWM and finding that its returned to what it was before the new series. Now, don’t get me wrong, Doctor Who being back and getting so much coverage in DWM is great and long may it continue, but every now and again I get pangs for the era when the magazine spent time on such inventive endeavours as comic strip, The Cybermen. The creation of this stunning serial forms a large part of Vworp Vworp! #1 and rightly too, with interviews with writer Alan Barnes, artist Adrian Salmon, and Editor Gary Russell. Other cult favourites such as The Flood and The Iron Legion are also covered in fine detail including the original notes for the final strip of the latter. 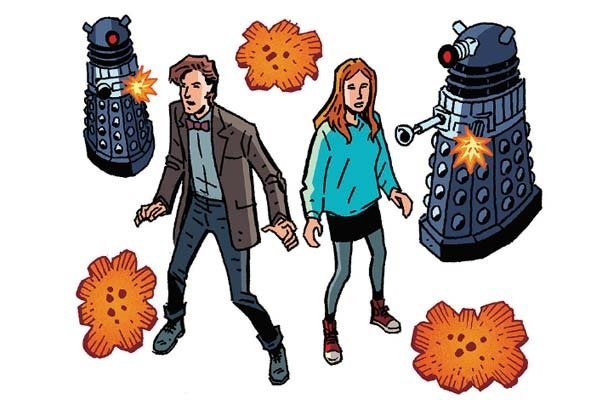 Looking beyond these incredible features, there’s the hilarious Collectors’ Corner with David J Howe reflecting on some classic merchandise, Part 1 of the Time Leech comic strip from Christian Cawley (never heard of him) which bursts with the Tenth Doctor’s energy as the Time Lord travels with his bustiest companion yet, and another comic from Gareth Kavavangh and John Daiker which combines Doctor Who with Life On Mars!
Countdown to Kentish Town tells the story of the magazine’s inception whilst Tim Quinn, Dicky Howett, Nick Miller, Roger Langridge, and Ben Wilsher, amongst others, inform how they’ve produced some of the funniest cartoons to grace the pages.
Who Cares! allows writers and well-known Who fans to write love letters to the magazine which, instead of being akin to a big wet kiss from your Auntie, is more like that smooch you experience from the person you know will be your partner for life.
DWM has been a big part of my life and Vworp Vworp! reminded me just how important it has been. There’s something truly wonderful about that.
While you can’t currently get your hands on a copy of Vworp Vworp! Volume One (without spending exorbitant prices on eBay), keep an eye out for a related announcement in future – and don’t forget to check out Volume 3 too!
(Adapted from an article originally published on Kasterborous in February 2010.)