Candy Jar Books have announced the second in the fourth series of Lethbridge-Stewart novels, The Daughters of Earth.
Written by Sarah Groenewegen, who wrote the well-received Lethbridge-Stewart short story, The Lock-In, the novel sees Lethbridge-Stewart’s fiancée, Sally, take a more central role when she’s involved in a freak accident. Could the mishap have something to with Lethbridge-Stewart’s recent investigations in UFO sightings in Cairngorm? And what do they have to do with the Daughter of Earth, a woman-only peace movement who are making waves in the political world. 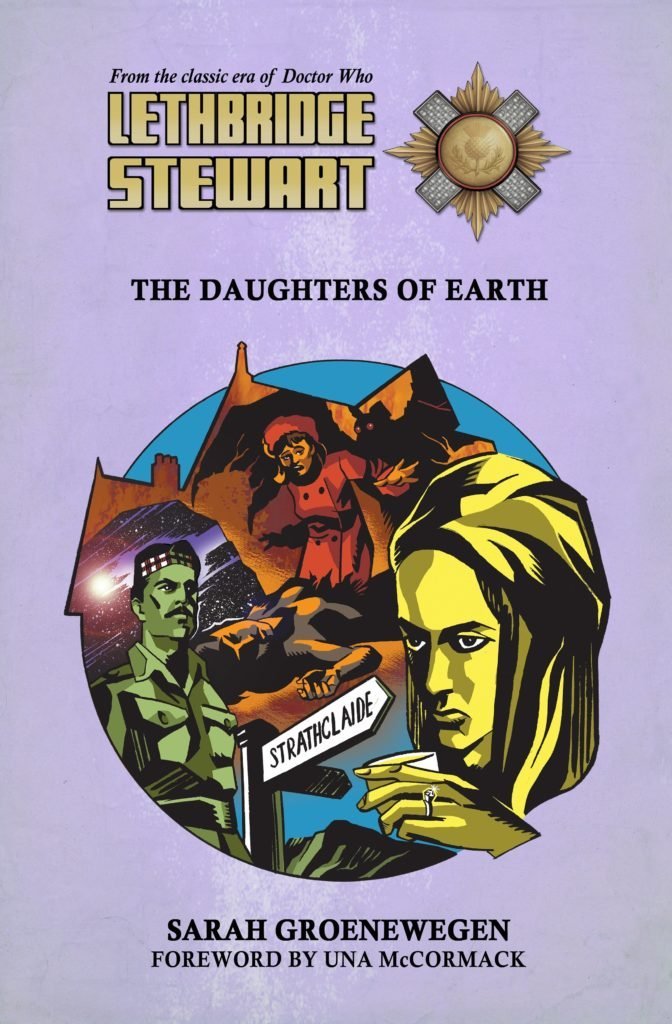 In what promises to be something of a game-changer for the series Groenewegen said:
“I wanted to explore the reasons for why she signed up, her ideals of duty in the face of the adventures they all share. Her relationship with the Brigadier, especially now they work together. Then there’s her interest in a newly emerging women’s lib movement arguing for peaceful solutions to mankind’s many problems – the Daughters of Earth.”
Sarah – who was born in Sydney but now lives in London – feels that despite The Daughters of Earth being set in the early 1970s, the subject matter is still quite relevant and reflects what’s happening in the divisive politics of today.
She continues:
“I had terrific fun creating a late-’60s peace movement led and run solely by women. While their politics are very much rooted in the start of women’s lib – the generation before the women of Greenham Common, and the grand-generation of the women now running the resistance against current right-wing authoritarianism – there are echoes of what’s happening now and how women organise. The intersections of class, race, outsiders versus those within the establishment – how prone they are to infiltration. I wrote the book during the US presidential elections, which kept being a touchstone to how far women have come to be treated as human beings with agency and a reminder as to how quickly reactionary politics can assert itself.”
Range Editor Andy Frankham-Allen says:
“The relationship between Lethbridge-Stewart and Sally has been simmering away in the background of the series since the beginning, eleven novels in total. The Daughters of Earth has been set up very deliberately to put Sally in a position that makes her look at her position in the Corps in a very different way.”
The book includes a foreword by popular Doctor Who and Star Trek scribe, Una McCormack.
She says:
“Representation matters. Sarah knows this, but, more importantly, she lives this. In her professional life, her commitment to equality and diversity has earned her recognition from her peers, and a ‘gong’ (a BEM, no less – yes, Sydney Newman would be horrified). In her writing, fiction and non-fiction, and her involvement with fandom, she has voiced and made visible lives and experiences that are too often ignored or denied: women who game, dykes who dig Time Lords. Doctor Who (let’s face it) hasn’t always been great at representation (where is our female Doctor?).”
With a gorgeous cover designed by Adrian Salmon, The Daughters of Earth is available for pre-order now, for £8.99 (+ p&p).
You can pre-order it individually or as part of the discounted UK bundle (which includes the novels Night of the Intelligence by Andy Frankham-Allen, and The Dreamer’s Lament by Benjamin Buford-Jones) for only £26.25 (including postage), saving £9.72, or an international bundle for only £45.00 (including postage), saving £5.97. Or, you can buy it as part of the Lethbridge-Stewart yearly subscription offer.

by Andrew Reynolds time to read: 2 min
News Another Name Linked to the Role of the Thirteenth …
News The New K9 Design Revealed
0
%d bloggers like this: