I’ve often searched for a phrase that sums up the moment when one way of thinking gives away to another. When one previous ideology crumbles to dust and leaves only the fresh, furtive ground of new, purposeful thinking and, to be honest, the best I could come up with was Shockabuku: a swift, sharp spiritual kick to the head that alters reality forever – and it comes from the genre-bending hitman movie Grosse Pointe Blank.
The idea that appeals to me isn’t the notion that one sharp spiritual upheaval could render an entire way of things null and void; it’s that there’s a way through each plane of existence – there is an answer that only requires a force (perhaps inner strength, perhaps divine intervention) great enough to see beyond what is presented.
I had a Shockabuku moment with Ghost Light. Upon first viewing, all I could see were the flaws. The poor sound mix that drowned out the densely packed but spiritedly delivered dialogue; the drastic edits that send scenes tumbling into one another to fit the story into its three-episode box; and then there’s the promised salvation of finally seeing the complete puzzle once that familiar end credit theme kicked in come the conclusion of the third episode. The moment came but delivery did not… at least not at first. 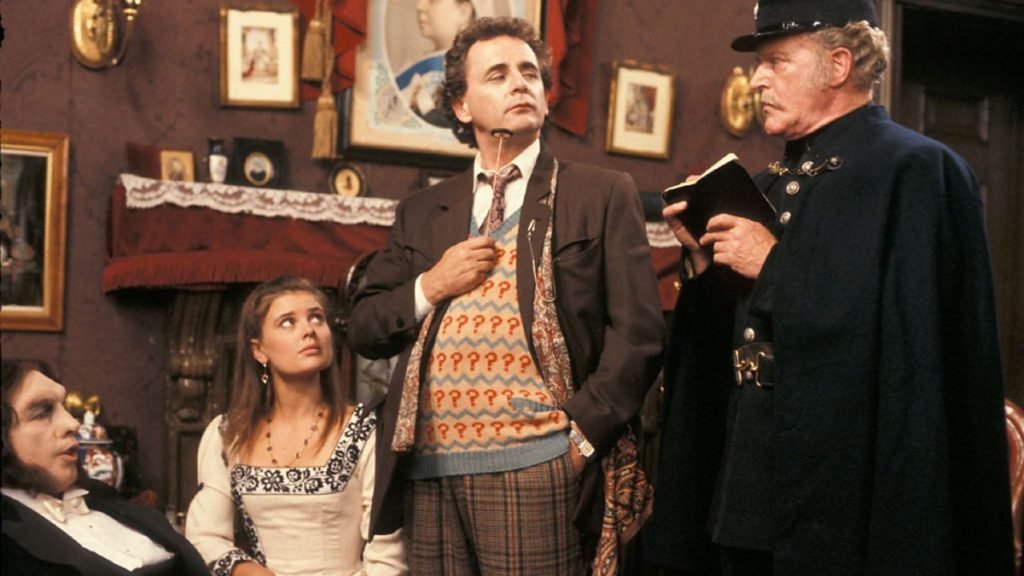 I’d come to the serial armed with my knowledge of what a Doctor Who serial should be and found that the old ways didn’t apply – it was a fundamentally flawed exercise. Much like The Light’s attempt to catalogue all life on Earth, my idea had been flummoxed by something that should have been blindingly obvious – in The Light’s case, that evolution is change and cataloguing everything as a perfect example of a species is futile.
I don’t attest to the idea that everything in the serial was designed in such a manner; I give Andrew Cartmel and Marc Platt a lot of credit for its construction but not credit for everything. I admire the plan but I feel the serial suffered from a dose of what Homer Simpson calls ‘stupid reality’. After all, accidentally stumbling upon greatness is a true sign of genius.
So, there it was. Shockabuku. The serial was great both because and despite itself. It’s something that becomes even clearer when reading The Black Archive’s wonderful guide to Ghost Light.
The book mirrors Ghost Light in the sense that it takes familiar elements of discourse and applies them in ways that are both illuminating (pun intended) and exploratory. Take the first chapter. Quoting the first principle in James E Cutting’s i-Perception article, Quicker, Faster, Darker: Changes in Hollywood film Over 75 Years on the ever-changing nature of cinema from 1935 to 2010, author, Jonathan Dennis argues that shoot lengths have dramatically shortened the closer we get to the present day – of course, Doctor Who isn’t cinema but due to its magpie tendencies, it’s still a valid point – and, on the surface, it’s true: the opening shot length of An Unearthly Child is longer than Rose which, perhaps counter-productively, is longer than Ghost Light but the point remains a salient one.
You might say that quantifying shots like this ignores intent. An Unearthly Child’s opening shot is longer than a minute because it’s building an atmosphere, it’s introducing the central mystery, and foreshadowing a showdown to come; Rose takes the idea that there is a literal world of stories but now, we’re going to zoom down from the heavens and focus on one particular shop girl; Ghost Light’s opening shot is a traditional establishing shot which is roughly 3 seconds of presenting the locale for the story.
However, An Unearthly Child’s opening moments aren’t typically the way a television show opens, and neither to some extent is Rose. However, Ghost Light is. An establishing shot like the one used to open the serial are ten-a-penny. The difference is how constrictive that now feels. Again, perhaps because of and despite itself, meaning is imparted to it because of what surrounds it.
It’s true that attention spans and our ability to absorb information have both shortened and improved; in terms of concentration we burn out rather than fade away – with the lofty ambitions of Ghost Light, the old ways seem to be slowly falling by the wayside. Then there’s the second chapter which via the method of sampling, covers technologies part in our ability to pick up on cues from narratives. Now, I break out in cold chills whenever I see sampling being proclaimed the next best way to open new pathways for discourse; it’s a side effect of its frequent heralding in journals from my undergraduate days. However, the chapter is a revelation – unpacking each person’s unique literary fore-bearers in a wonderful study of character and genre cross pollination. Laying bare the foundations of the story in such a way made me appreciate the genius of Cartmel and Platt even more – and again made me wonder about what we might have had if time and budget had not slipped away from the production.
Following that, we’re treated to a chapter on haunted houses which argues rather convincingly that they suddenly seem to be in vogue during the Moffat era. Dennis counts only two true haunted house tales in the classic run (Ghost Light and Image of the Fendahl), but, and this is key, all the other stories that start out from such beginnings and become something unique to Doctor Who (if you had time and say, a website, in which to write such a piece, you could at least attempt to train your critical eye on the haunted house story, nostalgia, and the Moffat era as a whole and end up with something pretty spectacular – that’s the strength of the book’s exploratory nature). As Dennis argues, Ghost Light is a haunted house story in reverse. We see exactly what goes bump in the night but never see that future date when some poor soul, in this case Ace, gets scared out of her wits. A chapter on mind control and moral culpability explores the quandary of hypnotism in fiction and its frequently-questionable role in Doctor Who. While not straying too far from the Svengali of fiction of yore, Dennis highlights the fact that the debate often hews closer to the ethics of the act rather than any lasting culpability of the person committing atrocities in the name of the hypnotist (in Ghost Light’s case, Josiah tormenting Mrs Pritchard and Gwendoline – as well as the housekeepers but the episode really gives no weight to their torment). What’s interesting is the possibility of Josiah’s gendered choices of victim. Time and again the chapter points out the moments where he could have used his mesmeric skills on the Doctor or Rev Matthews but chooses not to (there’s a historical precedent to this that will be familiar to anyone who has read Jon Ronson’s Lost at Sea).
Then there’s the small matter of the largely metaphorical use of Java which allows Dennis the chance to smooth out the confusion surrounding the fate of Sir George Pritchard, Charles Darwin, and the importance of what we mean by a story being ‘about something’, and then the place of God in Ghost Light.
If there was ever a serial that needed further exploration, it’s Ghost Light and the Black Archive is the perfect companion to lead you towards your own swift, sharp, spiritual kick to the head.
The Black Archive #6 – Ghost Light is available to buy now from Obverse Books.