Reviewed: The Black Archive #5 – Image of the Fendahl

Look past the painted eyelids, and there’s something unutterably disturbing about Image of the Fendahl, Chris Boucher’s 1977 masterpiece starring Tom Baker’s Fourth Doctor and Louise Jameson’s Leela.
I love all of Boucher’s Doctor Who, and there’s something creepy in all of them – sequences that resonate with something deep within us, whether that’s Poul’s primal screams of cowardice in the face of murdering automatons, or the child-like Xoanon, pleading to find out who he really is. But Image of the Fendahl takes this one step further, with a creature that feeds on death, finding sustenance in our very suffering, a being even the Time Lords thought too monstrous.
It’s an unconventional story, in its narrative, its first cliffhanger, and its antagonists. I see it as akin to The Impossible Planet/ The Satan Pit, almost “where angels fear to tread.” The four-part serial is dark and brooding and, yes, beautiful. 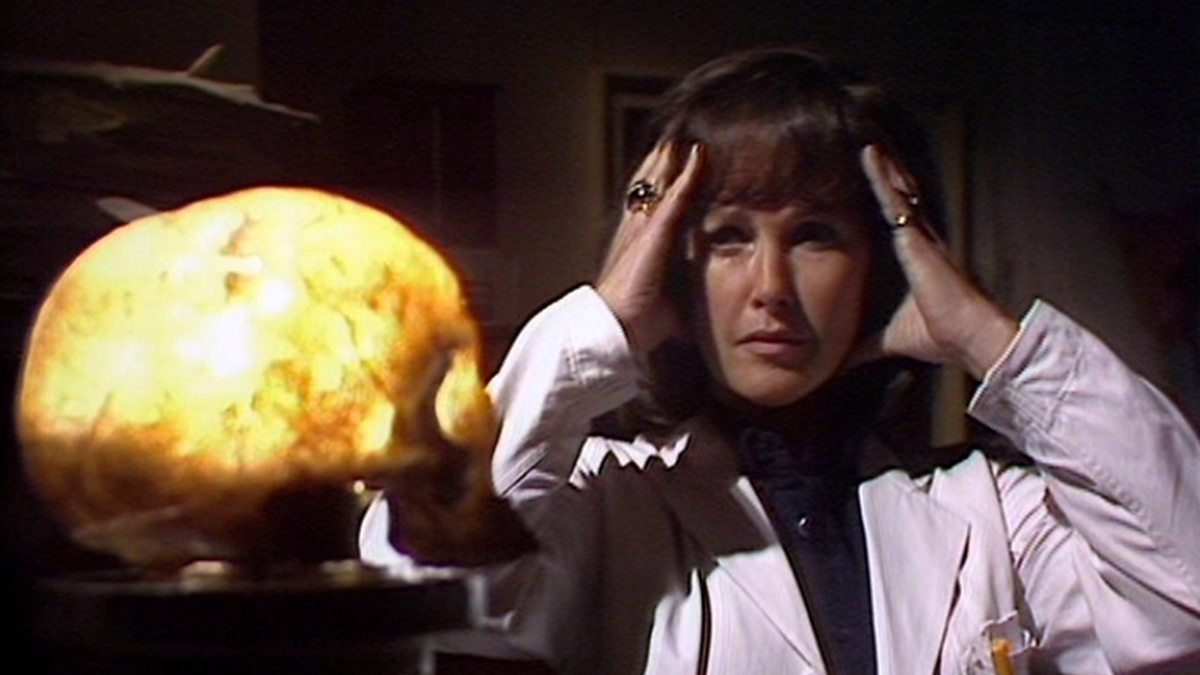 This opinion is shared by Simon Bucher-Jones, author of the fifth instalment in The Black Archive series. As a frantic fan of the fantastic Fendahl (try saying that when you’re possessed by the living embodiment of death), I was really looking forward to digging into this book-length essay about the serial, and it certainly hasn’t disappointed. It has, however, surprised.
Bucher-Jones’ stance is essentially: you think Fendahl is scary, but you don’t know the half of it.
It’s a convincing argument. He argues that, in the face of Mary Whitehouse complaining about dolls that kill, the Doctor drowning, and Leela’s skirt being too small (as if that’s a thing), the BBC had to rein Doctor Who in. And it did so by airing one of the most chilling stories ever. “Both on television and as a book, Image is a superlatively creepy story – it creeps you out (and I’d argue that if it doesn’t, you haven’t yet understood everything it’s saying and doing),” he writes. “Indeed, I shall show that it is, implicitly, the scariest Doctor Who story, and I mean that literally – for its terror lies in its implications… If Mary Whithouse had understood Image, she might’ve found it more offensive than a few mere strangulations and a toy with a dagger.”
But then, the public has always had a fascination with horror. Simon basically points this out by exploring Image‘s inspirations – notably the gothic. Now, I’ve always been a bit sketchy about this term, and I’m not turning to a dictionary to regale myself and readers with its actual definition. Nonetheless, Bucher-Jones spells it out well, and takes into account Hammer Horror, Amicus Productions (responsible for the Doctor Who films with Peter Cushing), and the work of Nigel Kneale, something which I find particularly interesting. “The Gothic” is a presence, fittingly enough, throughout this Black Archive, further detailing his own definition of “Post-Gothic”, particularly mulling over H.P. Lovecraft’s way of pulling the rug from underneath readers. Simon pulls a quote from The Call of Cthulhu that is particularly fascinating for anyone well-versed in the psychedelic: “some day, the piecing together of dissociated knowledge will open up such terrifying vistas of reality, and of our frightful position therein, that we shall either go mad from the revelation or flee from the deadly light into the peace and safety of a new dark age.”
Fresh from watching Doctor Strange, I ploughed into The Doors of Perception; my reading of The Black Archive: Image of the Fendahl was the ideal way to conclude this trippy triptych. Because that Lovecraft quote sits right at the heart of Boucher’s serial, layers of disturbing implications examined so fans can fully appreciate Fendahl.
Bucher-Jones’ book really is a fascinating and enlightening tome, covering a surprising amount with asides, theories, and, in a bit of a curve ball, maths.
Oh, but don’t let that put you off. School tutors would faint from hearing this but… I enjoyed the maths part. This is because Simon mixes it with astronomy. The Fendahl comes from the so-called “fifth planet”, supposedly located between Earth and Mars but time-locked by the Time Lords. So where does this idea come from? There is, shockingly enough, some history to another world – seemingly, a universal pattern that makes you in awe of this vast cosmos we’re just a small part of. And maybe Russell T. Davies recalled Image when writing The Stolen Earth, as those planets and moons rearranged themselves into their optimum pattern.

I knew nothing about the Fibonacci sequence (apart from that bit in Flatline) or the Titus-Bode Law before this, but knowing such designs exist across the universe, from spiral galaxies to the smallest strand of DNA, is incredible, and makes me want to learn more. That’s a huge achievement in itself.
It’s not all hard science, fortunately. That would do the book a disservice by implying it’s stuffy. It’s instead very compelling. Discussions range from theology to the actual title of the serial, from what happened to Mars and its native Ice Warriors to a so-called “unsupported fan theory” that takes Underworld into account.
It should come as no surprise that Bucher-Jones is a big fan of Image of Fendahl: after all, he co-authored the 1999 novel, The Taking of Planet 5 with Mark Clapham (and yes, a handy appendix points out places where Fendahl‘s narrative is expanded). But he’s not blinded to its faults. In fact, there’s a section balancing out the good and the bad. Although I find some ‘bad’ points are easy to explain away, his sheer enthusiasm for the story shines through in the ‘good’, pleasingly including script extracts featuring Mother Tyler.
This is a book that’s meant for reading on dark, cold nights, when the wind is whistling through the trees and there’s something sinister in the air. I’d say very few have really understood the implications Bucher-Jones draws out, myself included. But they sink in, sooner or later, later or sooner. From this essential Black Archive, you get a proper appreciation of just what Boucher did when he set the TARDIS down near Fetch Priory.
The Black Archive #5: Image of the Fendahl is out now from Obverse Books.

Reviewed: The Black Archive #5 – Image of the Fendahl