I love the smell of nerdery in the morning! As the smoke cleared from the opening ceremony and the memory of dancing Storm Troopers* gently faded into legend, the tables and chairs were laid out for the first panel of interviews of the Sci Fi Weekender. SFW, as it is better known, is the largest event of its kind in Europe – it is more than just a convention. It is a festival of nerdery spread out across a holiday park with 6 venues for panel discussions, interviews, signings, entertainment, demonstrations of prop making, re-enactments, trading, film watching, and people watching. It has gone from strength to strength over the years and, of course, this 8th cycle was the best yet, of course!
*Yes! Dancing Storm Troopers are a thing! Look up Boogie Storm and book them for your next shindig!
There was just so much going on that I couldn’t get to everything I wanted to see and/or do. However, as a die-hard Doctor Who fan I made sure I got to as much Who-related stuff as possible for the sheer pleasure of writing about it for you, dear reader! I missed the recreation of scenes from Tomb of The Cybermen, which would have been great to see live and in colour!
My overriding Who memory from this weekend will be of Yee Jee Tso and Daphne Ashbrook as a great double act – she has a great laugh, he is just full of energy and enthusiasm, and they both have a wicked sense of humour!

Doctor Who: The Companions


The first panel of the weekend was with the companions – we had Peter Purves, Frazer Hines, Daphne Ashbrook (although the humongous screen at the back of the stage introduced her as Grace Holloway!), and Yee Jee Tso. When asked to recall their Doctor, Peter spoke of the infamous “Billy Fluffs” and remarked that William Hartnell was the consummate professional but, sadly, was in decline with his health and couldn’t help forgetting his lines which made him very irritable – he certainly made no secret if he disliked anyone! Frazer simply stated that Patrick was a lovely, lovely man. Daphne and Yee reminded us that they worked with two Doctors and that Daphne killed Sylv.
In 2010, Yee took Daphne and Sylv on a tour of various locations they used during the filming of the TV movie. This lead on to Yee talking about a book he had written called Time and Spaces, which is currently out of print, sadly. This book is made up of photos that he took of locations during the filming of the movie accompanied by new photos of the same locations he had taken more recently, along with some interviews and anecdotes. He had thought the original photos lost but they were found in a box in 2015 which had scripts, shooting schedules… and the negatives for the missing photos!
When asked for embarrassing moments, Frazer pointed out that it was he and Patrick that usually caused the embarrassing moments, either together or separately! He told a story of how he and Wendy de-bagged Patrick when they were all inside the TARDIS prop waiting to come out. Patrick just stepped boldly forth sans trousers when called. Daphne’s story was that she just couldn’t stop laughing when she was supposed to be lying on the floor, dead – the corpse that corpsed! Yee recounted an incident when he was on the bridge and kept backing up and fell into the water – everyone found it funny except for the costume department who had to sort out the mess.

Which of their past projects would they like to bring back for a reboot? Peter said he’d like to see the motor bike trials show, Kick Start, make a comeback. Daphne’s suggestion, and one that really gets my vote, is for the show called Sleepwalkers, where a team of researchers use technology to enter people’s dreams in order to help them diagnose and fix psychiatric problems. The series got cancelled after a few episodes, but would really have potential today with the advances in special effects – this is a concept much like Doctor Who in that it really could go anywhere with the infinite possibilities of people’s dreams.

What did they do before Doctor Who? Daphne said she didn’t exist and Yee said, tongue-in-cheek, that he was dealing drugs and shooting people (which is what his character Chang Lee would have been doing)! Yee admitted that he didn’t really get to know Paul McGann during the filming, but got to know him much better afterwards. They both said that you just didn’t feel like you were working with Paul as he made it so easy for the people around him. It was a gift to work with him, as he was (and presumably still is) very intelligent and knowledgeable. Daphne pointed out that The TV Movie wasn’t a ratings flop – it got good figures, but the studio had to make a choice between Doctor Who and Sliders. And we know which show won that debate! 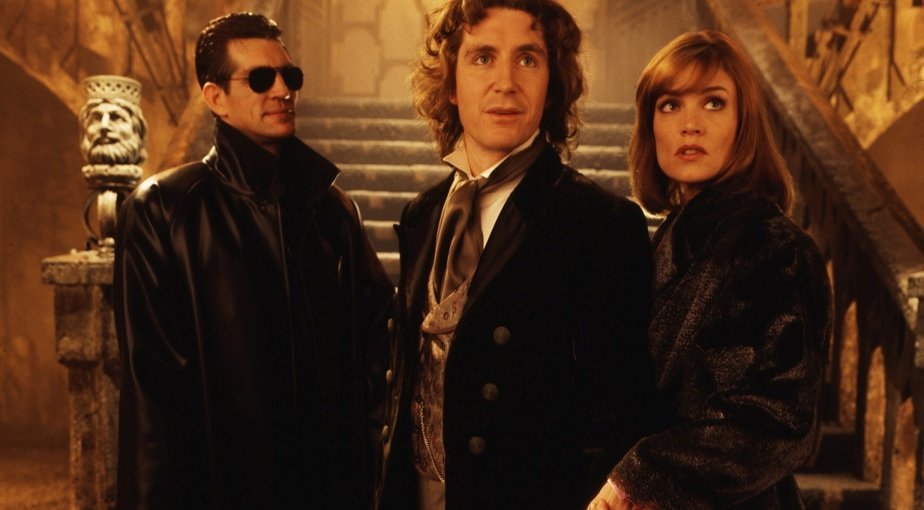 If the show had continued? Yee replies that he (Chang Lee, anyway) would most definitely have gone to the place that the Doctor had specifically told him NOT to go to and then the Doctor would turn up and rescue him!

Frazer opened with a joke when asked if anything was worn under the kilt… No, he says, it’s all in working order!
He also told a story about one day when he happened upon some “empty” Daleks and decided to climb in one and have a play. He then heard some other actors enter the room and he overheard them complaining about cast and crew… Long story short, he had a lot of free beer that week! When they met up during the shoot for The Five Doctors, he and Patrick ended up rolling around on the floor tickling each other. 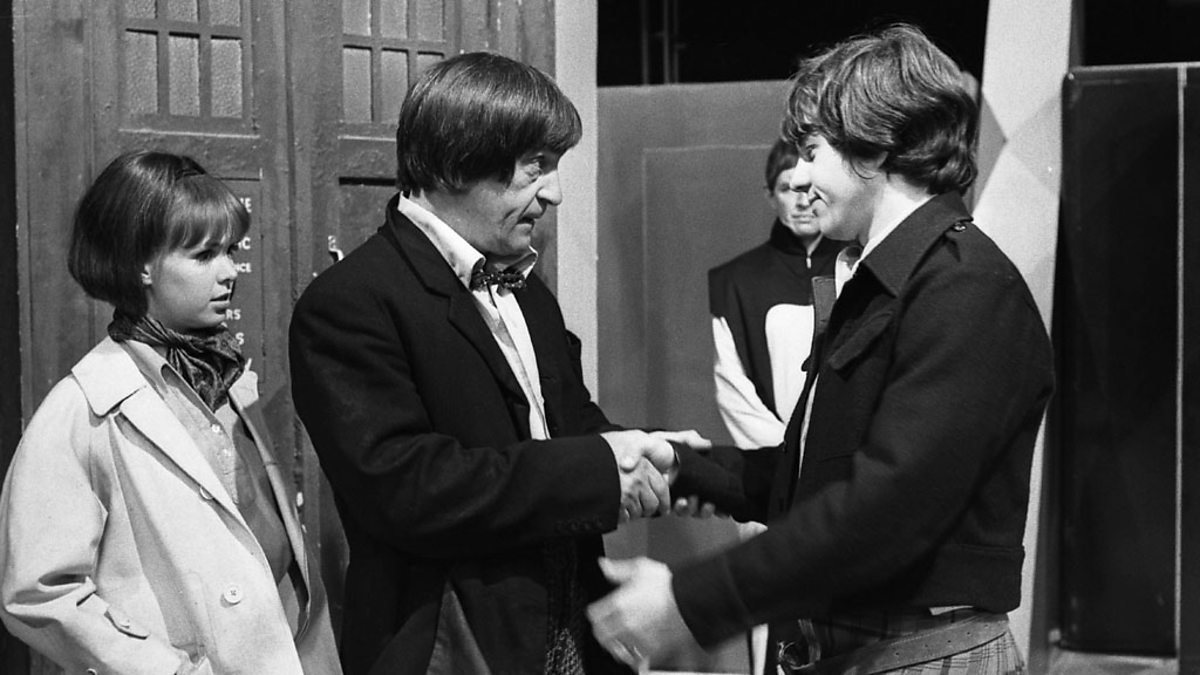 Naturally, the subject of practical jokes came up again – as it always does with Frazer around. He told a story this time of when Wendy Padbury was wearing a kilt and was sitting down – he and Patrick unbuckled it without it her knowing and when she stood up it fell down as she ran into the vicar in the church location they were using. He also once bought a car to win a bet with Patrick about the ornamental windscreen washers shaped like Daleks. Peter Capaldi is Frazer’s favourite new Doctor. He visited the TARDIS set in Cardiff recently and after Peter had finished filming his scenes he told the crew that they owed everything now to Patrick and Frazer; if they hadn’t made the show such a success after Hartnell left then we wouldn’t be here today. This was an emotional moment for Frazer, to be acknowledged in such a way.

Gareth comes across when being interviewed as such a lovely man… and I will say that he was much MUCH better behaved than the irrepressible Kai Owen and Eve Myles last year. He originally saw the character of Ianto Jones as a “red shirt” and didn’t expect to last long on the series. He only had three lines in the first story and didn’t join the crew unto the other main cast members had been together for a few weeks and had already bonded. He talked about the time the rest of the cast were in the US filming Miracle Day and he flew over to join them to record a Big Finish audio – it was much cheaper than everyone else coming back to the UK to do it. He was there for a total of two weeks, but everyone else was there for six months… the b@st@rds! On the subject of Miracle Day, his opinion why it didn’t work as well as other stories was because there was a main character missing – Wales itself. The location, the setting and the general Welshness of Torchwood is part of the charm that made it work. He, himself, is still very much based in Wales as it’s cheaper to commute to London for auditions and to work than it is to live there! He also revealed that he has been writing for Big Finish – it’s not a done deal yet, so his story may not get produced. But we can hope!
Advice for his younger self if he had the chance? Don’t get stressed and beat yourself up for being out of work. Eliminate self-doubt. Which super hero would he love to play? Batman, of course! He also mentioned that he would love to play the Master… Yes. Yes, I can see that. If John Simm and Michelle Gomez can pull it off, then so can Gareth!

One of the events during the weekend was a game of Just a Minute, hosted by David J Howe. This is hugely popular and is now a regular occurrence at SFW. This year, the contestants were Daphne Ashbrook, Peter Purves, Yee Jee Tso, and Linzi Gold (David’s step-daughter who is also a fabulous singer and performed several times over the weekend, including fronting Jericho Rose). It was, of course, a raucous 45 minutes of entertainment which showed just how competitive Yee Jee Tso is and how good at Just a Minute Peter Purves is with his tactical play. Yee calls him the Evil Doctor for this. Peter wins, of course, but Yee is a close second.
Nicholas Brendon (Xander in Buffy The Vampire Slayer, in case you didn’t know) almost played Captain Mal Reynolds in Firefly! Joss Whedon approached him during Series 6 of Buffy and asked if he would do it. Naturally, Nicholas jumped at the chance and said yes, but unfortunately the studio wanted Firefly made sooner than his schedule would allow, as he was still working on Buffy, so they had to go with someone else. Personally, I’m glad they did – Nathan Fillion is awesomeness incarnate!


The main draw of the weekend was the interview with Chris Barrie, conducted by Professor Elemental. That was two doses of fabulousness on stage for the price of one interview. The Brittas Empire almost got commissioned for the one-off series of older sitcoms the BBC produced last year, but sadly didn’t happen. It would have seen Mrs Brittas owning a chain of leisure centres with Gordon kept on to manage one of them. When asked to compare Rimmer and Brittas, Chris replied that he had cornered the market in losers! The difference between the two is that Brittas believes he can fix the world if everyone would just give him the chance, and Rimmer also believes he knows best, but blames everyone else for everything going wrong.
I’ll finish this piece with a shout out to the best act of the weekend – The Dark Room. A clever concept delivered by a very funny man, who thinks fast on his feet and is great at engaging the audience. Had me in stitches! Go and look at his website and try to catch him on tour – you won’t regret it!
Did you go to the Sci-Fi Weekender 8? What did you think?

by Simon Mills time to read: 8 min
Features Here's What The Doctor Who Companion Thought …
Features Writing Scream of the Shalka & Discovering Blo…
0
%d bloggers like this: