The Five Doctors Gets The RiffTrax Treatment

Getting the full riff treatment live, Doctor Who fans in the US will be able to catch the hilarious RiffTrax team as they tackle the 20th anniversary special The Five Doctors in theatres.
RiffTrax Live: Doctor Who – The Five Doctors takes place in cinemas for two nights only on August 17 and 24, 2017 with the feature length special will be getting riffed by former Mystery Science Theatre 3000 cohorts Michael J. Nelson, Kevin Murphy, and Bill Corbett in nearly 700 select movie theatres nationwide. 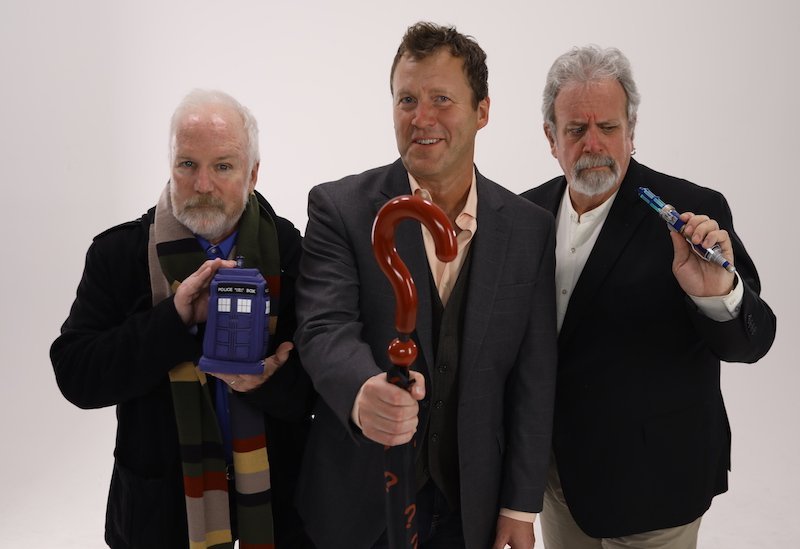 The Five Doctors sees Peter Davison (The Fifth Doctor), Richard Hurndall (The First Doctor), Patrick Troughton (The Second Doctor), Jon Pertwee (The Third Doctor), and Tom Baker (The Fourth Doctor)…sort of, wrenched out of time and placed in a battle arena with a sinister tower at its centre. As the various incarnations of the Doctor join forces, they learn they are in the Death Zone on their home world of Gallifrey, fighting Daleks, Cybermen, Yeti – and a devious Time Lord Traitor who is using the Doctor and his companions to discover the ancient secrets of Rassilon, the first and most powerful ruler of Gallifrey.
The RiffTrax team produce audio commentaries consisting of improvised jokes and inspired bits to be played over your favourite TV shows and movies (as well as occasionally providing commentary and movies for some of the worst films ever made).
Michael J. Nelson of RiffTrax said:
“We couldn’t be more excited to finally be meeting the Doctor on the big screen. Well, not just one but five Doctors, making this event five times more fun.”
RiffTrax Live: Doctor Who – The Five Doctors takes place on Thursday, August 17 at 8pm ET / 7pm CT and tape-delayed to 7pm MT / 8pm PT, with a rebroadcast on Thursday, August 24 at 7:30pm local time.
Tickets for RiffTrax Live: Doctor Who – The Five Doctors can be purchased online by visiting www.FathomEvents.com or at participating theatre box offices. For a complete list of theatre locations visit the Fathom Event’s website here (theatres and participants are subject to change).

The Five Doctors Gets The RiffTrax Treatment

by Andrew Reynolds time to read: 1 min
News Cybermen! The Master! Missy! The PodKast with a K …
News Christmas Special: Not Even Director Rachel Talala…
4
%d bloggers like this: