Ever since Jodie Whittaker was announced as the Thirteenth Doctor, we’ve had kind words and support from a variety of former Time Lords. Now we can add the Eleventh Doctor Matt Smith to the well-wishers with his own unique welcome message for the first female Doctor.
However, it wasn’t really words of encouragement that he offered. No, it was more like singing. Smith told the crowd at the Boston Comic Con (via Radio Times) that after calling up Whittaker and getting her voicemail, he elected to sing a certain theme song to her.
“When I found out about Jodie, I rang her and she didn’t pick up the phone. Because it was like, before the announcement. So I just left a message, just going: ‘duh duh duh duh, duh duh duh duh’”
In the video below, Smith then lead the gathered crowd in a rendition of the Doctor Who theme before adding:
“And I just did the whole song, so she must have been thinking ‘what the hell is going on?’
“And then I said, ‘it’s Matt, call me.’”

Smith went on to sympathise with Whittaker’s current position, likening it to the pressure he felt taking over the show from the ever-popular David Tennant.
“People did just sort of shout ‘Don’t break it!’ And I thought ‘Oh God,’
“And in England particularly there’s a lot of weird…there’s a lot of hysteria that surrounds it. Like, it makes the 6 o’clock news, all the big news shows. It’s a very strange feeling.
“I remember that feeling of being…I dunno, judged before you’d done anything. And only in the world of Doctor Who does that happen.
“Once you’re part of the family you’re in. But until then it’s like you’re an alien.”
Well, until you start playing an alien of course.
Doctor Who returns this Christmas with Twice Upon a Time on BBC 1. 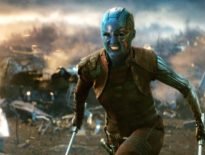