Sonic Feedback: Here's What You Thought of Oxygen!

Ah, Jamie Mathieson. Now there’s a writer you can rely on. Just look at his credits: Mummy on the Orient Express, which reassured me that Doctor Who was still Doctor Who after Kill the Moon shattered some amount of faith in the show; Flatline, which presented a brilliant idea that demonstrated the series’ flexible format and capability to explore fascinating ideas; The Girl Who Died, which introduced the divisive Ashildr, and was probably the only episode in which she was actually bearable, helped along by Mathieson’s balancing of emotion and humour; and now, Oxygen.
But what did you make of Oxygen? Was that gasp you let out at its conclusion one of disappointment or breathtaking brilliance? In our poll straight after the story’s BBC1 airing, we asked you just that. Here’s what you said.

Looking at those results, it’s fairly clear that Oxygen was received very positively indeed. Okay, not by everyone (that’s never going to happen – I’m sure there are some out there, beyond redemption, who don’t like The Caves of Androzani), but a whopping 83.19% of those surveyed gave it either a 5/5 or 4/5 (or the DWC equivalent, at any rate). That’s pretty amazing.
14 people thought it average, and just 5 didn’t enjoy it in the slightest, awarding it either 1/5 or 2/5.
Our very own James Lomond agreed, and waxed lyrical:

“Then the underlying premise was, itself, utterly horrific. Taking the logic of neoliberal capitalism to its extreme where the market becomes more important than the individual lives existing in it was wonderfully played. And that’s another thing I love about Oxygen…

“The whole piece is dripping with wonderfully satisfying allegory. The human workers in this fantasy Capitalist future are redundant – their lives as a mere means of production. They might as well be mere “organic components” or walking corpses following protocol. When they cease to be productive enough for the spreadsheet – they get removed. It gives a whole new meaning to zero-hours contract.”

Elsewhere, Alex Skerratt said, “It could just be me, but it felt almost Kubrick-esque in its direction, somewhere between 2001: A Space Odyssey and The Shining.” Tony Jones summed up: “It may have had a little too much exposition, and the zombies were hardly essential, but underneath this was a very strong story. There were some powerful scenes and now we have moved on from Bill being the new kid on the block.” 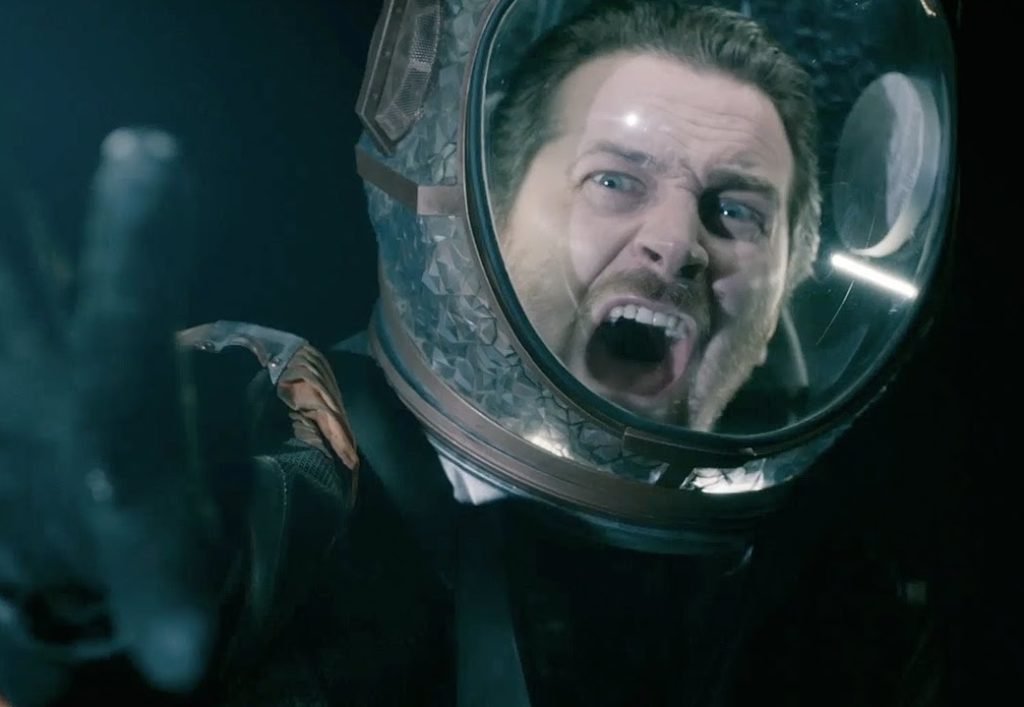 Matt Badham praised it too, saying, “The Pilot, Smile, Thin Ice, and Knock Knock were all great. Oxygen, though, took things to another level. It did what Doctor Who does really well, in my humble opinion: mixing thrills and spills with thought-provoking ideas.” But Mez Burdett wasn’t overly enamoured with it, particularly the last 8 minutes or so: “After a certain point, there seemed to be quite a rapid amount of info dumping and a brave, if slightly strange, end to the episode. It was at just about the point where the Doctor quickly explained Bill’s non-death where I struggled. But let’s not be too mean – Oxygen may have its faults but it’s still a great slice of Doctor Who with a Twelfth Doctor I’ve longed for since he first appeared way back in 2013.”
Let’s return to your thoughts, dear readers. What did you all think? Commenters, in general, seemed to think it’s Marmite. Stephen Collyer enthused, “Loving this season so very much. Pearl is wicked, writing and production values great IMO… Doctor Who has never looked so good. Oxygen has quite literally blown me out my airlock!!!” On the other hand, Ranger really didn’t like it: “I was expecting so much and what we got was writing by numbers, from the clumsy, unsubtle attempt to gain sympathy at the beginning, to the pathetic thank you from her partner at the end, with about as much pathos as when I thank my butcher for giving me some chops. His writing and characters were so much better in Mummy and Flat line, his characters had more depth and were believable. These were just stock characters, interchangeable with most other base under siege stories. The acting was wooden and as for the political message! I’ve gone on record before about how I think it is dangerous and misguided for DW to become overtly political, it doesn’t matter whether it is left, right, central or whatever.”
Peter Rabytt wasn’t so impressed either: “I am going to go against the pack tonight and say it was my least favourite episode so far series 10. I will lay my cards on the table and admit that I have never found Zombie type monsters either frightening or that interesting. Ok, so it was actually the suits doing the walking and killing, but the visual is the same, and rather reminiscent of silence in the library? People walking with their heads on their sides in make up, always remind me of the video for Thriller! It was ok, but was for me too much of a hurry through a grimy space ship like ’42’. Love the jibes at exploitation, corporate greed and us versus ‘the suits’ but otherwise did not do a lot for me. Have not generally been a massive fan of Nardole, but I have to admit he was actually pretty good in this. The Doctor being blinded reminded me of Capaldi’s imminent regeneration and departure, which I found a bit sad. I realise I am in a minority here, but generally I found it ok, bit depressing and a bit dull. But you can’t love em all!” 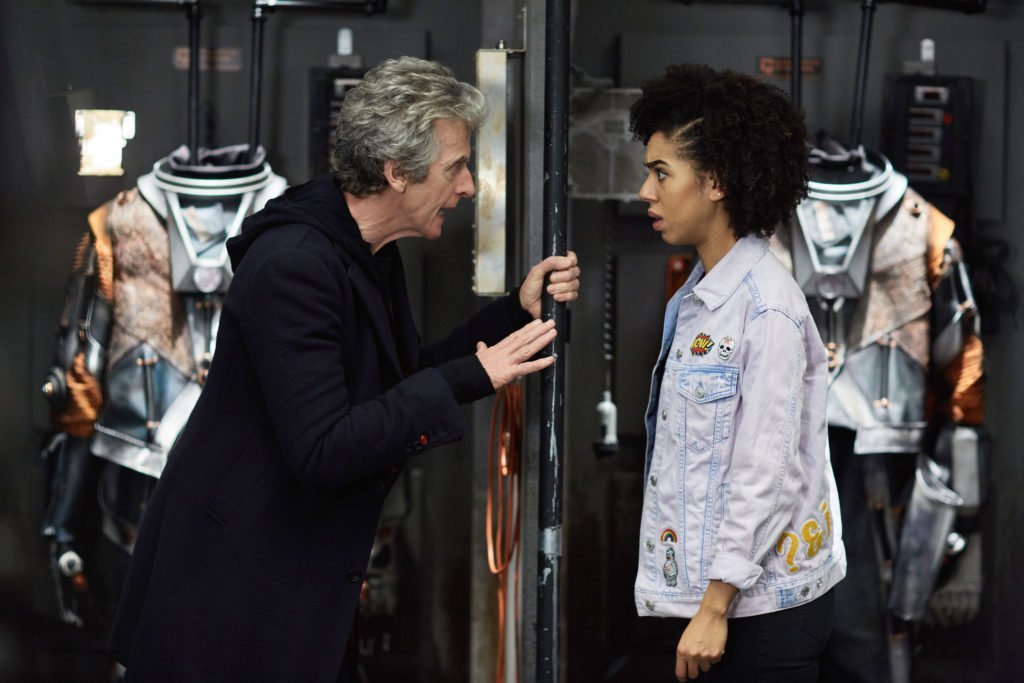 Nigel Webb was nicely succinct – “stunning. Just stunning” – but let’s leave our final comment to someone we don’t hear much of, but who is, of course, always welcome: JMH, who said:

“Usually a lurker here but wanted to chime in and say I thought that Oxygen was the best of series 10 so far. Series 9 was my absolute favorite, knocked me over again and again with brilliance. But as much as I adore Capaldi and have so far really liked Bill (and thought Nardole’s participation has been just about right), this series hasn’t clicked for me. I’ve liked the episodes, just haven’t loved them. And I don’t like zombies, yet the rest of the episode finally felt like it got in gear. I liked the approach of taking social commentary to extremes to highlight current problems. And then there was the Doctor, again going to his own extremes on behalf of a companion, this time to the point of physical impairment. Really, twice seriously endangering himself. He also was especially “quippy”. Whatever is going on with the vault really seems to be messing with him. He appears kind and caring when communicating with the occupant, yet being stuck in one location for so long eats at him, and he is getting reckless. Hoping that remaining episodes keep the momentum begun here. (Already mourning Capaldi’s departure with every episode; maybe that has affected my view.)”

Oxygen went down very well indeed with the DWC, although some were let down because Mathieson has built up such a good reputation. You can’t win them all, but Series 10 was shaping up beautifully.

Sonic Feedback: Here's What You Thought of Oxygen!