It’s that time of the year again: a stressful but wonderful season when you’re supposed to be full of goodwill and cheer, yet are instead worrying about what presents to buy. Just what do you get for the Doctor Who fans in your life? Well, let the DWC help you out!
Today, we’re running through some of the very best audios your loved ones will enjoy listening to after Christmas Day. Without further ado… 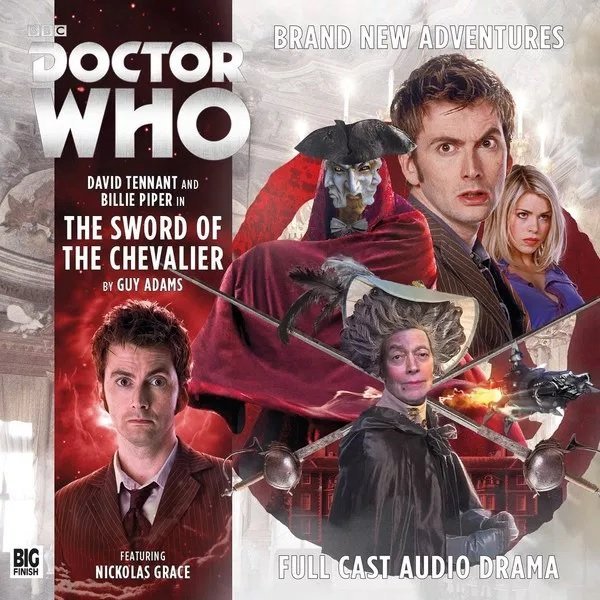 Following the success of last year’s Tenth Doctor Adventures: Volume One, which saw Catherine Tate return as Donna Noble across three adventures, David Tennant is back as the Doctor – this time, with Billie Piper as Rose Tyler!
There are, once more, three audio stories available featuring this popular duo: Infamy of the Zaross, The Sword of the Chevalier, and Cold Vengeance. You can get them separately, of course, but why would you, when you can instead get a Limited Edition set which includes the trio plus exclusive behind-the-scenes material?!
You can’t get the individual releases on Amazon until February 2018, but you can purchase them all from Big Finish now. The Limited Edition set, however, is exclusive to Big Finish, and comes in a neat boxed package that makes an ideal present for under the Christmas tree.
Written by John Dorney, Guy Adams, and Matt Fitton, this is a highly recommended bunch of episodes, perfect for reliving the heady days of 2006. Man, over a decade ago. How did that happen?!

Baker’s End: The King of Cats Tom Baker is deservedly one of the most beloved actors in the Doctor Who universe: he’s hilarious, madcap, and altogether wonderful.
Here, Tom Baker is being Tom Baker. Literally. He plays himself. Need we say more?
Okay, so this isn’t strictly Doctor Who, but aside from Baker, it includes Katy Manning (who played Jo Grant alongside Jon Pertwee’s Third Doctor) and is written by Paul Magrs (The Nest Cottage Chronicles; Sick Building).
As you might expect, it’s a gloriously nuts premise:

Peevish ACTORS are descending mournfully upon the remote English village of HAPPENSTANCE for the funeral of TV legend TOM BAKER. His one-time co-star Suzy Goshawk is SUCKED into a PAROCHIAL vortex of intrigue involving the quailsome local vicar, Tom’s acidulous housekeeper Mrs Frimbly and various other fruminous SCUMBLEBUMS. None of them can agree upon how Tom met his disastrous end and Suzy is starting to suspect that something MURKSOME and SWERVISH is going on.

The snow comes down and SUZY finds herself trapped at BAKER’S END for Christmas, with all the village’s creepy pensioners enslaved by a strange, dancing dragon… and a Sinister Presence LURKING on the sidelines.

Why are old ladies TWERKING their BOTTOMS outside the post office-cum-mini-mart? Why is the vicar creeping about in the bushes in the dead of night? And why, just when all looks hopeless, does a strange, scobberlotching creature SPROING into view? Who exactly is THE KING OF CATS in his furry costume and his battered golden crown?

Also, there are elderly MUMBLECRUSTS who shoot LASERS out of their KNOCKERS.

Baker’s End: The King of Cats is the first in a new audio series starring ex-Time Lord Tom Baker as himself, alongside former Doctor Who companion Katy Manning, and Susan Jameson, who played opposite Tom in the AudioGo Doctor Who audio series.

If you’re looking for a present that’s a bit different from your common-or-garden gift, this is the one to get!

The Doctor Who Audio Annual 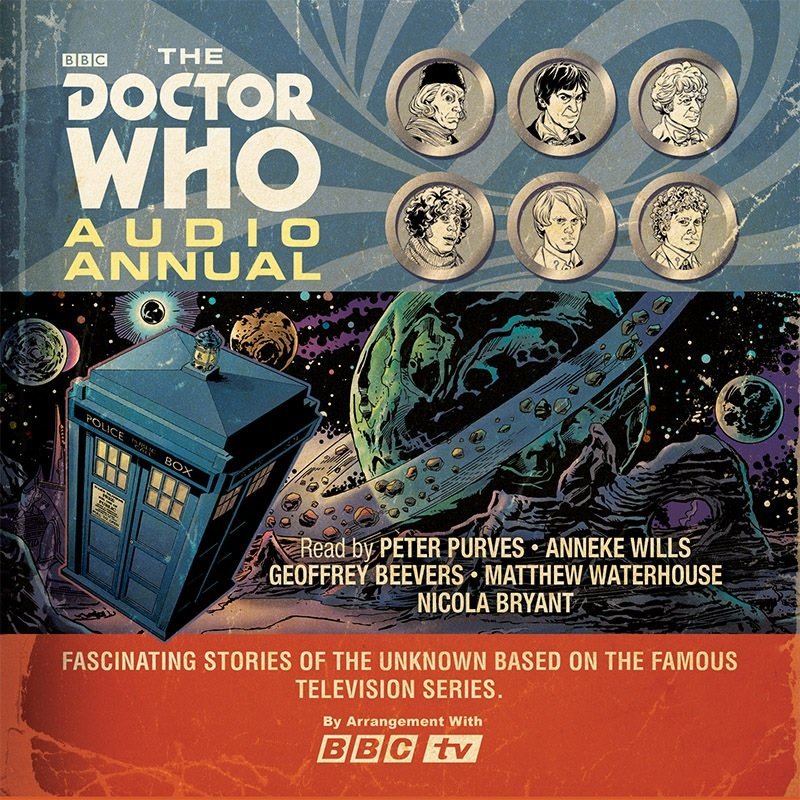 The Beano, Rupert the Bear, even The Simpsons: it’s a festive tradition to stock up on annuals throughout December. They’re normally consumed in a Christmas afternoon or on Boking Day.
This one’s a unique inclusion in the BBC Audio line: adaptations of stories featuring the first six Doctors (William Hartnell, Patrick Troughton, Jon Pertwee, Tom Baker, Peter Davison, and Colin Baker) from Doctor Who annuals in the 1960s, 1970s, and 1980s. They’re read by Peter Purves (Steven), Anneke Wills (Polly), Geoffrey Beevers (the Master), Matthew Waterhouse (Adric) and Nicola Bryant (Peri), and prove an utter delight.
Here’s what this CD promises:
In The Sons of Grekk, the First Doctor is held prisoner in a brutal, otherworldly society. The King of Golden Death finds that the Second Doctor, Polly and Ben have materialised inside an Ancient Egyptian pyramid. The Third Doctor, Jo, and the Brigadier confront a familiar adversary in Dark Intruders, whilst in Conundrum the Fourth Doctor, Adric and K9 experience warped physics in the corridors of the TARDIS. FacingThe Penalty, a delirious Fifth Doctor finds old friends and adversaries ganging up on him, and the Sixth Doctor and Peri plunge into a dangerous period of British history in The Real Hereward.
Also included are two vintage essays on the character of our favourite Time Lord: Who is Doctor Who? from 1966 and The Phoenix in the TARDIS from 1968.
Take a nostalgic journey through time with these vintage Doctor Who tales.
With a duration of 2 hours 20 minutes, The Doctor Who Audio Annual is released on 7th December 2017. There’s a lot we don’t know about the Doctor – and rightly so.
His early life is a giant mystery, of course, but so’s something more recent: the Time War, a cataclysmic event that affected the whole universe and tore the Doctor’s life apart.
Big Finish explored this in some depth with the late, great John Hurt, as the War Doctor in four boxsets. Now, Paul McGann is back as the Eighth Doctor, pre-The Night of the Doctor, reeling from the devastation caused in just the early days of the Time Lords’ incredible battle with the Daleks.
This is the first set of four planned boxes, and teams McGann up with former EastEnders star, Rakhee Thakrar as Bliss.
As with the aforementioned Tenth Doctor Adventures: Volume 2, this first boxset (including four stories: The Starship of Theseus by John Dorney; Echoes of War by Matt Fitton; The Conscript by Matt Fitton; and One Life by John Dorney) won’t be available on general release until after Christmas, but you can get it already exclusively from Big Finish! 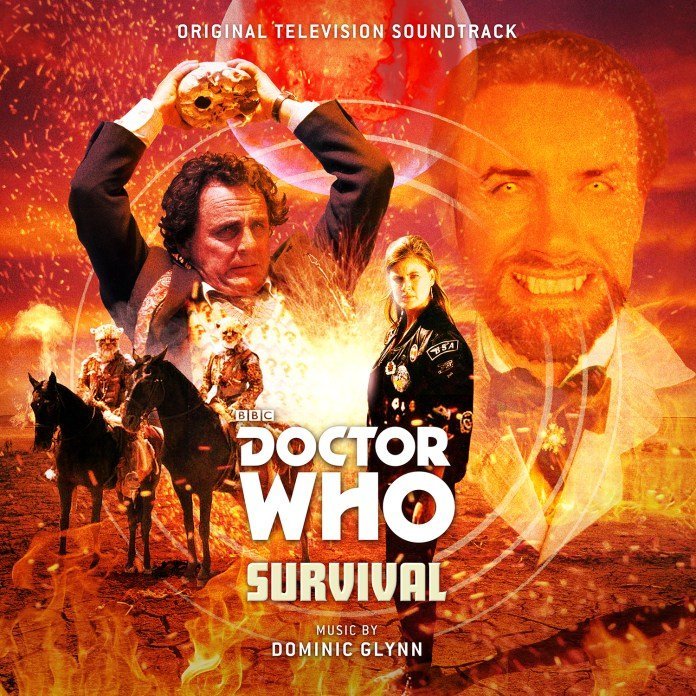 As we’ll see again in Twice Upon A Time, Doctor Who is about endings. But it exhibits this theme in an optimistic manner.
Never is this better displayed than in Survival, the final serial from the Classic run of episodes that ran from 1963 to 1989. It was the end, but it didn’t play out that way. Pleasingly, its writer, Rona Munro returned to the show for The Eaters of Light earlier this year.
And here, we have Dominic Glynn’s original soundtrack for this three-part story, completely polished for release on CD and vinyl. Across 24 stunning tracks, you can relive the Seventh Doctor (Sylvester McCoy) and Ace’s (Sophie Aldred) trip to Perivale, then to the planet of the Cheetah People, where they learn the full meaning of the phrase, “survival of the fittest”. Oh, and there’s the Master (Anthony Ainley) too, looking sharp in a nice suit and wearing feline fangs.
This isn’t narration – it’s purely the music that carried us along the journey.
It’s a great audio, but if you think the present’s recipient would prefer 1960s Who, The Daleks is also available on CD and Vinyl.

Those are our recommendations for today, but stay with the DWC all this week as we present daily gift guides on all the best Doctor Who merchandise, ready for Christmas…!

by Philip Bates time to read: 5 min
Features Exclusive: The Making of the Shada Steelbook (With…
Features Vote for Your Favourite Episode of Doctor Who Seri…
0
%d bloggers like this: