Out Now: The Eighth Doctor – The Time War Series 1

One of the most exciting audio releases of 2017 is out now: Big Finish’s The Eighth Doctor – The Time War Series 1.
This four-story boxset is the beginning of a range that acts as prequels to The War Doctor series, this time starring Paul McGann’s Doctor skirting around the edge of the cataclysmic battle that rages between the Time Lords and the Daleks.
Writer, Matt Fittons says:

“How exciting to go back in time; before the War Doctor, before that fateful night on Karn – to see the Eighth Doctor doing all he can to stay out of a conflict raging across time. But inexorably, inevitably, he’s dragged towards it – forced to confront unpalatable truths about his people and what they’ve become, learning new things about an enemy he thinks he knows, all the while trying to save the innocents. We’ve a brilliant cast of allies and enemies, and an exciting journey planned as this Doctor makes a last stand for his values in a universe at war.”

Sounds exciting, eh? And it is! It’s exciting, clever, and scary. Look out for the DWC’s review very soon…

1. The Starship of Theseus by John Dorney

The Doctor and his companion, Sheena, land the TARDIS on the glamorous luxury space-liner Theseus just as it’s about to leave the Jupiter space-port. But when a disturbance catches their attention, they realise sinister events are taking place on board. Can the Doctor and Emma solve the mystery? Or is there something else they should be worrying about?

2. Echoes of War by Matt Fitton

Colliding with the full force of the Time War, the Doctor crash-lands on a jungle world with a ragtag band of refugees.

Luckily, the Doctor has friends: not only plucky scientist Bliss, but another, much more unlikely ally. Its name is ‘Dal’…

3. The Conscript by Matt Fitton

Cardinal Ollistra has a new tactic to persuade the Doctor to join his people’s fight. With his friends locked away, he has been conscripted alongside fellow Gallifreyans to train for the front lines of battle.

Can there be any place for dissent when the Time War looms so close?

4. One Life by John Dorney

As the full force of the Time War crashes down around the Doctor and his friends, a desperate battle for survival ensues.

But not everyone is playing the same game. Ollistra is after a weapon that could end the war in a stroke and she’ll sacrifice anyone or anything to take it back to Gallifrey. Even the Doctor.

Surrounded by Daleks, and on a tortured planet, only one man can save the day. But he doesn’t want to fight.

The range is set after the Dark Eyes and Doom Coalition lines, but naturally before The Night of the Doctor, when the Doctor is forced to face facts: that he must get involved in the Time War, and does so by regenerating and abandoning his name.
This first set stars Paul McGann as the Doctor, Olivia Vinall as Sheena, Nimmy March as Rupa Maguire, David Ganly as Quarren Maguire, Sean Murray as Captain Darvor, Hywel Morgan as Koloth / Jefferson, Laurence Kennedy as Purser Lunney / Aymor / Chancellor, Rakhee Thakrar as Bliss, Karina Fernandez as Captain Tamasan, Jacqueline Pearce as Ollistra, Nick Brimble as Commander Harlan, Katy Sobey as Veeda, Okezie Morro as Norvid, and Nicholas Briggs as the Daleks.
The Eighth Doctor: The Time War Series 1 is out now exclusively from Big Finish on CD and as a download; it goes on general sale in January 2018.

Out Now: The Eighth Doctor – The Time War Series 1 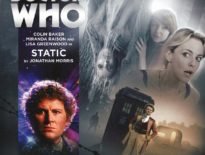 Merchandise Out Now: Big Finish’s Doctor Who – Static
Merchandise The Third Doctor Will Meet Cybermen and the Monk f…
0
%d bloggers like this: