Oh my word, Jamie! Surely not? The Second Doctor? The Cosmic Hobo himself? The Time Lord who made regeneration acceptable? The quintessential Pied Piper with his funny hat and flute??
Actually, I’ve always been slightly mystified by the Second Doctor’s immense popularity. Don’t get me wrong – I don’t ‘dislike’ him. My least favourite Doctor is always going to be streets ahead of my favourite brand of detergent. It’s just when I rank them from William Hartnell downwards, he just doesn’t have… I don’t know. The Seventh Doctor’s enigma? The Sixth Doctor’s charisma? The Eighth Doctor’s hair?

Maybe I got off to a bad start?

When I first began my exploration of the Whoniverse in the late ’90s, I must confess that Patrick Troughton was the last of the classic Doctors that I discovered. Not out of choice; Second Doctor tapes were virtually non-existent in the HMVs of 1997, with the exception of The Troughton Years compilation video. And when it came to choosing between that and Earthshock, or even Resurrection of the Daleks, poor Patrick was never going to make the cut. 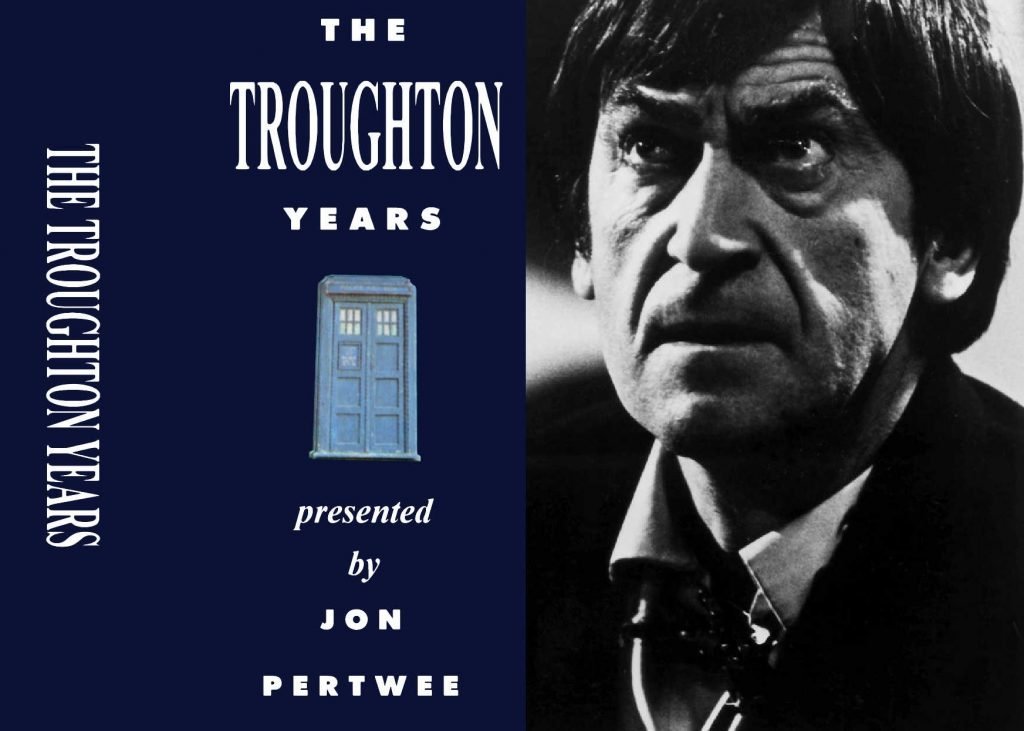 Still, the completist in me finally made the decision to pick up a copy of The Troughton Years at the tender age of 11.
Oh dear. And he was so innocent and young…
Yeahhh. Anyone who’s ever owned a copy of The Troughton Years will be the first to tell you that it’s hardly representative of the ‘monster golden age’ that the late ’60s epitomised. For a start, The Abominable Snowmen Episode 2 has no actual snowmen in it. What’s with that? It’s about monks, bro. Monks. Now, of course, there’s nothing wrong with monks, but when you’re expecting something along the lines of The Nightmare Before Christmas meets The Thing, in grainy, atmospheric monochrome, it’s a long way to fall.
Secondly, The Enemy of the World Episode 3, when seen out of context, makes absolutely no sense. It’s unaided by the fact that its ‘action’ is split between a kitchen, a caravan, and a corridor, on the planet MaybeEarth in the year MaybeNinteenNeventyefeuidhff. I remember looking at it and thinking, “What the hell am I watching?” Jon Pertwee gives the introduction on the original tape, and he’s useless; he may as well have described all the different types of bollard.
Finally, we have The Space Pirates Episode 2.
Okay so we’ve established that The Troughton Years tape isn’t good; it’s a tough VHS for a demanding 11 year-old to sit through. I could be wrong, but I think the collective number of scenes for Patrick Troughton’s Doctor – between The Enemy of the World Episode 3 and The Space Pirates Episode 2 – is about… four? Not a great start when coupled with the strange monk episode, which is completely devoid of snow, snowmen, and plot. Moreover, when you’re coming to this VHS fresh from the marvellous Hartnell Years tape – with The Celestial Toymaker et al. – you know which one is going to take pride of place on the shelf.

Are the Second Doctor’s stories the problem? For me – yes, they’re a factor. After a shaky start, my next Troughton experience was badly-pirated version of Tomb of the Cybermen. The poor picture quality notwithstanding, let’s call a spade a shovel – hardly anything happens in Tomb of the Cybermen. At least, it’s very story-lite when it’s compared to the plot-fest that is The Keys of Marinus. Yes, The Keys of Marinus is flawed, but it never scrimps on narrative. And to be honest, I don’t care what a piece of drama says about ‘what it means to be human’ if the whole experience is going to have me reaching for the cafetiere.
After Tomb, I was mercilessly exposed to The Moonbase episodes 2 and 4 and The Wheel in Space episodes 3 and 6, and I have to say that these didn’t fare much better. Again, these stories tread a lot of water and nothing really happens. What’s worse is the fact that it takes a looooong time for nothing to really happen! They both have a premise of sorts – that of a monster attacking a base – but it would be fair to say that both The Moonbase and The Wheel in Space are mere concepts rather than shining examples of multi-faceted storytelling. I will admit that The Wheel in Space goes for a new slant on the ‘base under siege’ format by replacing the ‘base’ part with a ‘wheel,’ but, to be honest, they might as well have used a biscuit tin for all the entertainment value it added.
I’m being a bit tongue-in-cheek… I don’t hate The Moonbase, or even The Wheel in Space. I’d still rather trudge through these adventures than any episode of Mrs Brown’s Boys. A bad episode of Doctor Who is still Doctor Who! It’s just, you know, if I was going to introduce someone to Patrick Troughton’s Doctor, I probably wouldn’t start with a base under siege, you know? (Sorry, wheel under siege.) I’d go with The Enemy of the World! So much better now that we have the whole thing. A stone cold classic.

What about Patrick Troughton’s performance?

I think Patrick Troughton is a first class actor. His embodiment of the ruthless Salamander in the aforementioned Enemy of the World is a joy to watch. He also delivers an intelligent, considered, heroic performance as my favourite Time Lord from Gallifrey. However! (Oh come on, you knew it was coming…) For me, the Second Doctor just lacks that ‘spark’ that makes him leap off the screen. There are tiny glimmers of ‘something more’ going on, like when he unwittingly takes Jamie’s hand in Tomb of the Cybermen, or when he comically serenades an Ice Warrior in The Seeds of Death. That being said, when I look at the more caricatured Doctors such as William Hartnell or the ebullient, elastic Matt Smith, Patrick Troughton’s performance seems so… understated. Indeed, so understated that I must be missing it!
Take The Power of the Daleks. The Doctor spends so much of that story creeping down corridors and playing his recorder… There’s hardly any character to analyse. I suppose the argument could be made that such an approach adds to the mystery of this strange, face-changing time traveller from another world, but I think I need something more as a viewer. And yes, at the other end of the scale is a Doctor who blusters around the TARDIS with his arms akimbo before attempting to strangle his companion, and that’s not cool either. Although – it does give me something to work with!
Can I think of positive things to say about Patrick Troughton’s Doctor? Yes. I love his creativity as a performer. There’s a scene in The Invasion Episode 2 where, in a moment of perceived peril, the Doctor tells Jamie that they need to “accept the situation”, and he sits down on the floor and deals out playing cards. I’m assuming this is a touch that was added by the actor, rather than something that was in the script, as it seems typical of Troughton’s quirky brand of comedy. I love it!
That being said, in my experience these moments are few and far between. Admittedly it doesn’t help that so much of the Second Doctor’s era is still missing, presumed wiped, so we often have to rely on soundtracks and telesnaps to enjoy many of his stories. Even then, I must confess that slow-burners such as Fury From the Deep, The Space Pirates, and The Faceless Ones are not going be at the very the top of my watch list, if we ever have a motherload of missing episodes returned to us from a distant land.

So – is the Second Doctor really boring? I suppose it depends what you’re looking for from a Doctor Who adventure. Heck, I found a lot of The Daleks’ Master Plan boring, but I don’t think I will find many of my Who kin to back me up on that one!
Perhaps you’ve never seen a Second Doctor story before and you’re wondering where to start? Well, there’s this video called The Troughton Years… It’s not available anymore so you needn’t fear it.
These are the stories I would recommend. You should go out and buy them on DVD immediately.

These are my go-to Troughtons and I never regret watching them, even with The War Games’ stunning ability of not-quite-knowing-when-to-end (it’s 10 episodes long!). I would also recommend The Macra Terror and The Underwater Menace, if you don’t mind using your imagination to fill in some of the gaps.
Otherwise, yes, the Troughton years are a complete snooze. Unless The Evil of the Daleks makes a miraculous return in 2018, leave The Abominable Snowmen on the shelf and take 2012’s The Snowmen out for a spin instead. Real snowmen in that one – no hairy beasties or warrior monks. You won’t regret it.

by Alex Skerratt time to read: 6 min
Features What's In A Name: The Tomb of the Cybermen
Features Remembering the 2013 DVD Release of The Enemy of t…
0
%d bloggers like this: