Following on from his appearance in the free Doctor Who Comic Book Day release, the Seventh Doctor is back in a three-part adventure Operation Volcano, from Titan Comics.
Unveiling the covers for the first issue of Sylvester McCoy’s Seventh Doctor adventure, which feature artwork by Alice X. Zhang, Christopher Jones and Will Brooks, Titan have also announced there will be a launch day signing featuring former Doctor Who script editor Andrew Cartmel and writer Ben Aaronovitch who both penned this new story.
An unknown alien intelligence in orbit around the Earth. Astronauts under attack. A terrifying, mysterious landing in the Australian interior. The future of the world itself at stake. Counter Measures activated. The Seventh Doctor and Ace are slap bang in the middle of it all! This is Operation Volcano! Doctor Who: The Seventh Doctor expands Titan Comics’ hugely popular and critically acclaimed range of Doctor Who comics with a double-sized first issue – written by Carmel and Aaronovitch and illustrated by Christopher Jones (The Third Doctor) and colourist Marco Lesko (The Ninth Doctor).
Accompanying the main story is a back-up strip written by Richard Dinnick with art by Jessica Martin. Martin actually appeared as Mags alongside the Seventh Doctor and Ace in The Greatest Show In The Galaxy in 1988. Colours for the back-up strip are also provided by Charlie Kirchoff.
The cover for Doctor Who: The Seventh Doctor #1 from Alice X. Zhang has also been revealed – along with covers for the second and third issues by Christopher Jones and Will Brooks. 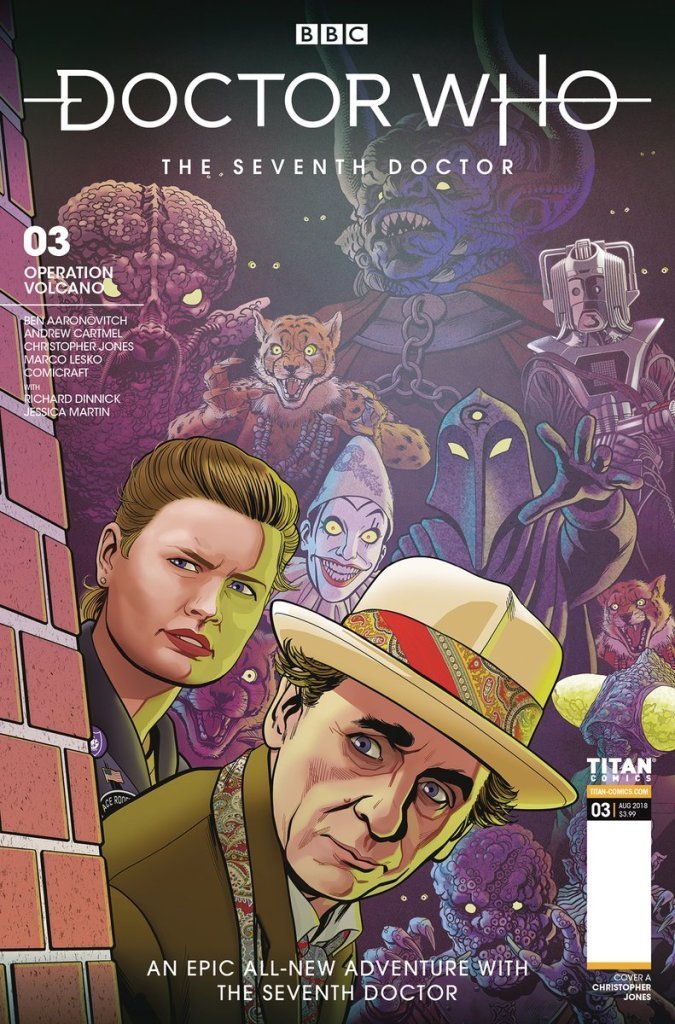 The alternative cover for that issue from Will Brooks is inspired by the 1988 story The Happiness Patrol. To celebrate the launch, Ben Aaronovitch and Andrew Cartmel will be signing copies of Doctor Who: Seventh Doctor #1 at the Forbidden Planet London Megastore. Aaronovitch and Cartmel will be joined by Lee Sullivan to sign copies of Rivers of London. Cartmel will also be signing copies of The Vinyl Detective. This signing takes place on Wednesday 20th June from 6 – 7pm.
The signed edition of Doctor Who: The Seventh Doctor #1 is available for pre-order now from Forbidden Planet for release on June 6th.

by Andrew Reynolds time to read: 1 min
News More Details for Big Finish's Class Revival
News Infamy Of The Zaross To Be Released on Vinyl
0
%d bloggers like this: