Could the Unused Tenth Doctor Story Arc of Series 5 Work for Big Finish? 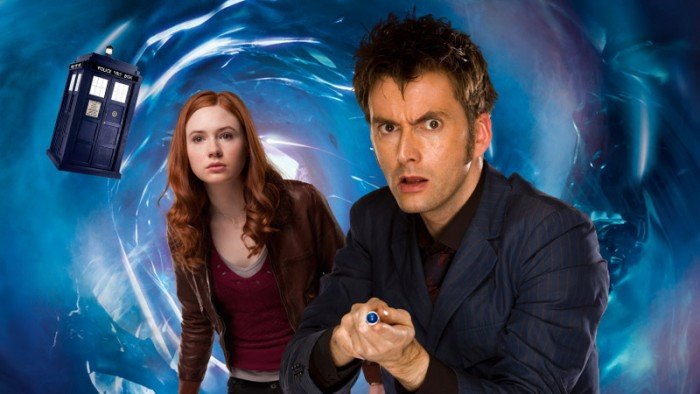 Before David Tennant’s departure was announced, then-incoming showrunner/head writer Steven Moffat had some very different ideas for Series 5, which could have involved the Tenth Doctor travelling with Amy Pond, instead of Matt Smith.

Here is what Moffat explained in this interview (from 2013), as well on The Fan Show:

“I only had the roughest idea. Had David stayed for one final year, it would certainly have been his last, so my pitch was that it would start with the TARDIS crashing in Amelia’s back garden – as now – and a terribly battered and bruised Tenth Doctor staggering out.

“Amelia finds him, feeds him fish custard (no that was for Matt, it would have been something more Davidy) and generally helps him. But we, the audience, can see he’s in a truly bad way. Dying maybe. Eventually he heads back to his TARDIS, and flies off.

“But when he returns – many years later for Amy – he seems perfectly fine, and indeed doesn’t remember any of those events… And of course over time, we realise what we saw was the Tenth Doctor at the end of his life, about to regenerate. Events that we return to in Episode 13…”

It really is a disappointment that this never came to be, and that is totally understandable. But what if the concept were to be revisited, as a Big Finish anthology series (perhaps Unbound)? I think that would be the perfect way to bring it to life – on audio. As many listeners would know, the Unbound range is obviously non-canonical and that’s not a problem. Why not bring Moffat on board to adapt his initial ideas and consult with the Big Finish team? He’s the brains behind it all!

Yes, Steven, you are right – Series 5 does consist of 13 episodes. But there is one slight problem; 3-4 volumes would only fit a total of 12. Look at some other examples such as Doom Coalition, Torchwood: Aliens Among Us (Series 5), and also The Eighth Doctor: The Time War; this is one real concept which deserves to be brought to life. So what if the first episode could be separate from the rest, as a feature-length Special Release? Just like how The Eleventh Hour got its extra 20 minutes (pardon the pun). And with the remaining 12 episodes, I suggest having 3 volumes containing 4 episodes each. This would also definitely work if we have some traditional two-parters along the way; including the finale, of course.

If this really were to happen, it should not be referred to as “Series 5”. Some of you may remember the numbering issue that, unsurprisingly, became subject to debate amongst fans and officials. Often referred to as “Series 1” during production which was deemed to be very misleading for those who have watched Christopher Eccleston as the Ninth Doctor. Despite The Eleventh Hour directly continuing from where The End of Time concluded, Moffat wanted to give the 2010 series a fresh start by introducing a brand new Doctor and Companion. “Series 1” in an alternative fact, “Series 5” is the factual numbering. However, on the bright side, all the DVD/Blu-ray/digital releases refer to it as “Series 5”.

But that’s not all. Moffat jokingly decided to call it “Series Fnarg”. Fnarg? What is Fnarg, what does it mean?

“It’s a whole new number, I haven’t decided yet, but I think it’s even.”

I don’t know what Fnarg means either; does sound very Pythonesque though. Actually, why not use Fnarg as the title for the Unbound anthology series? It can always gain a new meaning from Moffat himself (if he’s already figured it out). Maybe Fnarg could well be the key arc word, just like “Bad Wolf” or “Silence will fall”; probably a different kind of story arc to the “Cracks in Time”. Who knows?

On the casting, David Tennant and Karen Gillan would definitely be the number one choices to reprise their roles, this time in the alternative universe. But due to their tight schedules and likelihoods of being unavailable, I suggest Big Finish could substitute them both with some very familiar faces to the Whoniverse: Jacob Dudman and Caitlin Blackwood.

Jacob is best known for his sublime vocal impressions of both the Tenth and Eleventh Doctors. Check out his acting on The Great Curator video (also starring Jon Culshaw), and his narration on Big Finish’s Tenth and Eleventh Doctor Chronicles (the latter release is now available to pre-order). Caitlin, as you all know, is Karen Gillan’s younger cousin. You will of course recognise her as Amelia Pond, starting with her debut in The Eleventh Hour, and later appeared onscreen with her elder self in The Big Bang.

With Jacob and Caitlin sounding very much like the original television characters, I have absolutely no doubt they would both make the perfect duo for the Fnarg anthology series. Definitely worth listening to the alternative Ten and Amy!

So how about that? A special Unbound version of Series 5 titled Fnarg, starring Jacob Dudman and Caitlin Blackwood, split into three boxsets beginning with a feature-length opener.

I think this one could turn out to be… a WHOPPER!

Could the Unused Tenth Doctor Story Arc of Series 5 Work for Big Finish?

by Andrew Hsieh time to read: 3 min
Editorial Goodbye, Steve Ditko (1927- 2018)
Features A Guide to the War Doctor's Appearances in Al…
0
%d bloggers like this: