Doctor! Every villain says it differently. It is surprising the variety of ways you can pronounce two syllables. Titan Comics’ The Eleventh Doctor #3.2 opens with a page of various monsters saying his name. A combination of my obsession with the show and the clarity of the art made me read each; not simply in a different voice, but in a different inflection. The Cyberman was monotone, the Sontaran angry.
The art by the duo of Leandro Casco and Wellington Diaz is an improvement over The Eleventh Doctor #3.1. The two of them are able to put vivid emotions onto the faces of all the characters. One particular scene shows the Doctor in great pain. I found this panel particularly effective, seeing the Doctor in agony whilst the monster gloats in the background.
These sorts of images counteract some very exposition-heavy dialogue. Most of it is setting up what will be the main focus of this year’s run of comics, but it did get fairly monotonous. There were multiple pages of the new Big Bad telling the Doctor exactly what he was doing with the technology in front of him. Lots of technobabble. I don’t necessarily dislike technobabble; it has its uses. Here, however, I feel that some of the ideas could have been shown, if they had taken more than this issue to set up the plot.
Technobabble aside, the ideas are solid. The Doctor meets a Silence/ Silent/ however you want to spell it we have not seen before, one who is not even remembered by his own people. 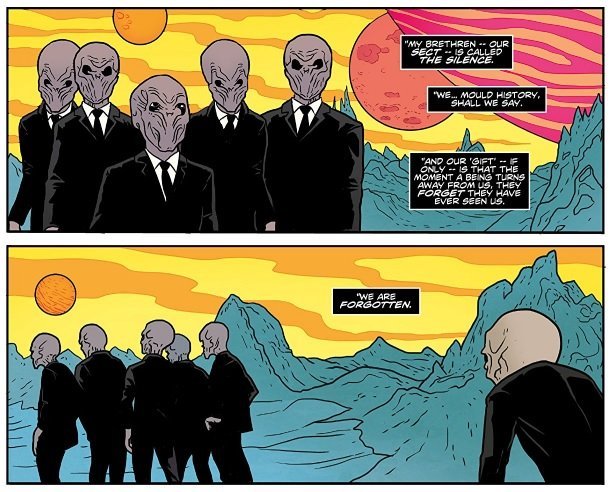 This Silence calls himself the Scream and has lured the Doctor to a planet in order to steal his memories/life-force. This is the usual techno-fantasy stuff that Doctor Who likes to play around with and makes it different to a lot of other science fiction.
It also seems like the Eleventh Doctor is getting yet another new companion – in the shape of a very powerful cosmic child that had the memories of the Doctor and his other companion, Alice Obiefune. Matt Smith always worked well with children, so let us hope that this can be brought across in the comic. The idea of a child with limitless power is intriguing. It will be interesting to see how much of a child this entity will actually be.
There is also a return of a character from the previous year of Eleventh Doctor comics. This may turn out to be their final appearance; if so it was a fitting send off to a character that many people adore.
With all the set up out of the way, it looks like Year Three will continue to be a huge galaxy hoping adventure. I for one am glad to be along for the ride.
Geronimo.
Titan Comics’ Eleventh Doctor #3.2 is available via Comixology, or you can buy a collection of the first five issues of Year Three from Amazon now.