Can you trust River Song? That’s the question that’s been on the Doctor’s mind ever since he (from his point of view) first met her in 2008’s Silence in the Library/ Forest of the Dead. And now, UNIT will be asking that same question, when Kate Stewart, Osgood, and co. meet Alex Kingston’s much-loved character.

The Diary of River Song: Series 5 is released very soon, but if you’re looking for a further fix of the Doctor’s time-travelling wife with a penchant for guns, she’ll be going head-to-head with the UNified Intelligence Taskforce in April’s UNIT: Incursions.

Tempest finds UNIT on a mission in Scotland where oil rigs are under threat in the Hebrides, and there’s a chilling breeze in the air.

Then The Power of River Song  sees the team helping a scientific project for total renewable energy, led by a mysterious curly-haired director. And on this mission, one of the team will make the ultimate sacrifice for time itself…

UNIT: Incursions will be released in April 2019. We’ll bring you more details as soon as we get them. 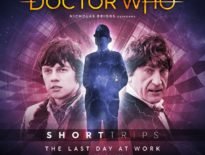