Why I Love: The Daleks' Master Plan

Like all Doctor Who fans, I am obsessed with the missing episodes. Being quite young relative to the series, and quite a new fan relative to my age, I have been fortunate enough to see a number of episodes recovered in my lifetime so far, and I hold out hope every day that we will find more. This obsession doesn’t come so much from wanting any particular episodes, per se, but as a collector, completionist, and huge fan of the series, the idea that I will never have the ability to watch every single episode of Doctor Who is heartbreaking to me.

Despite that, however, there is one serial in particular that I would give various limbs to see in its entirety, and assuming you read the title of this article, I think it’s safe to guess which one I’m talking about. I refer to, of course, the almost completely lost William Hartnell classic, The Daleks’ Master Plan.

Written by Terry Nation and Dennis Spooner, The Daleks’ Master Plan is the 21st Doctor Who serial and originally aired in 12 parts between 13th November 1965, and 29th January 1966. This makes it the longest serial in the entire classic series, assuming of course that we count The Trial of a Time Lord as four serials, which I personally do, making Master Plan the longest. So long, in fact, that it’s actually 13 episodes: five weeks earlier, a single episode lead-in titled Mission to the Unknown aired, and this was notable as such for three reasons.

Firstly, it is the only time in the entire classic series that a serial was one standalone episode, disregarding The Five Doctors as, although it did air firstly as a single special, it was later broadcast in multiple parts; secondly because it marked the first complete absence of the main series cast, including the Doctor himself, something that would never happen again in the series’ history. We would have other Doctor-lite stories, such as David Tennant’s Blink – however, the Doctor did still make an appearance in that episode, hence: lite.

And finally, because it was Verity Lambert’s final serial as producer. An era was ending as we headed into this mammoth serial, but this was still only the beginning.

But I know you’re all wondering: why the obsession with this serial in particular? Back when I got a copy of the Lost in Time DVD boxset (which is incredible, by the way) I watched all of the surviving episodes and clips of this serial and fell in love. I later tracked down a copy of the audio recordings, as well as of the two-part novelisation, and just became obsessed with it all; this obsession came from two main places.

Mission to the Unknown was actually a big part of this, purely for the fact that the context of it is incredible to me. There you are, on October 9, 1965. A week earlier, the final episode of Galaxy Four had aired, and you couldn’t wait to see what the Doctor and his companions would get up in this week’s serial. Then, the opening credits roll, and you’re introduced to a whole new cast of characters – but there are still Daleks, and this is still very much Doctor Who. You come the end of the episode and there has been no Doctor, no TARDIS, no Vicki or Steven, but next week you are promised part one of The Myth Makers, which will see Vicki departing and Katarina joining the TARDIS (but more on her later). It’s amazing that the production team just threw this sole episode, seemingly with no relevance whatsoever. But in five short weeks, all would become clear.

The other big reason I became obsessed with this serial was simply its scope. The longest serials up to that point had been The Daleks and Marco Polo, each 7 episodes a piece and both from almost 2 years ago, so for them to suddenly appear with a prologue episode which leads into a 12-episode Dalek story…? That’s the best kind of insanity to me, and I fell in love with it instantly.

A prior season had The Dalek Invasion of Earth, which was only six episodes, but felt like a huge event in itself; The Daleks’ Master Plan is double that length and reaches an entirely new narrative level. The only other serial to rival this length was The War Games some four years later (aired in 10 parts).

The concept in itself of having these recurring villains appear in multiple serials, all of which build to this huge climax – the final time William Hartnell’s Doctor would face off against them – is just fantastic storytelling. This would later actually inform some of my own writing, with a recurring villain in a series I was writing who would then have his final confrontation with the heroes in a story titled, Andrew’s Master Plan. Doesn’t quite have the same ring to it, but I digress. That story was six parts, and each part shared a title with an episode from The Daleks’ Master Plan. This serial influenced me a lot, and still does to this day.

I also have a lot of respect for it because of its tone; all of the previous Dalek stories had been a bit dark at times (yes, even The Chase – y’know, selectively), but this one takes the cake, for sure. In fact, it was so scary, that it became the second serial that wasn’t aired in Australia, where I am from. Yes, this serial was dark, and much of this darker tone was actually chalked up to this being the first serial to feature the death of a companion…

Looking at this in context, there are only four companion deaths in the entire classic series, and two of them take place here: Katarina, who perishes in episode 4 (The Traitors, after being in the series for just five episodes in total) and is then replaced immediately by Sara Kingdom, only for her to die in the final episode of this serial anyway (The Destruction of Time, being in the series for nine episodes total). The other two classic series deaths are Adric in Earthshock and Kamelion in Planet of Fire, which are, interestingly enough, both Fifth Doctor stories from Seasons 19 and 21 respectively. Oh, spoilers, I suppose.

As someone who has grown up with New-Who, it feels fairly commonplace for companions to die now, but this was something that only happened a small percentage of the time in the classic series. There are 34 companions in the classic series, and this total includes Grace Holloway from The TV Movie (1996). Of 34 possible companions ripe for the killing, only four actually died, so for two to happen here in the same serial in the programme’s third year, and then not happen again for another 16 years is insanity – but I love it.

It just goes to show you how this serial took risks that its predecessors weren’t game enough to and its successors would struggle to replicate for years to come. This is the essential Dalek story. It’s just a shame that we likely won’t ever get to see it in its entirety (unless it gets an animated feature at any point or the episodes miraculously turn up some 53+ years after being broadcast). But all hope is not lost, and the love for this story isn’t going away anytime soon. I couldn’t be more excited for the vinyl soundtrack release! The only issue is, because I live in Australia, getting the Amazon UK exclusive edition (which I want more than anything) is going to cost me an arm and a leg.

For those of us who can’t get the vinyl release – yet, anyway – we are still extremely lucky to have the entire serial available in audio form already, as well as those fantastic Loose Cannon reconstructions which help give us maybe the closest look we will ever get at what the serial originally looked like.

We are living in a renaissance of Classic Doctor Who (especially with those gorgeous Blu-ray sets), and by keeping these stories alive, I’m sure it will continue for years to come.

Why I Love: The Daleks' Master Plan 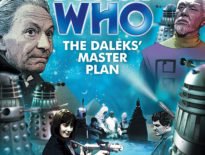 Features Your Guide to The Daleks’ Master Plan CD rel…
Features Doctor Who's Lost Companion: The Story of Kat…
0
%d bloggers like this: