It is with great sadness that the Doctor Who Companion records the death of actor Paul Darrow. He died on Monday morning, 3rd June 2019, after a short illness. He was 78.

Paul was best known to genre fans as Kerr Avon in Blake’s 7. Avon was one of the original team: he joined the series in episode two and stayed for all four seasons. Avon was promoted to the leader of the Liberator (and then the Scorpio) after Gareth Thomas (Blake) elected not to return for a third season. Darrow’s sardonic voice and charismatic screen presence made him much loved by fans. His flirtation with the wicked, vampish Servalan – both of them often in leather – was considered a camp highlight of the show. Avon was, in some respects, Spock to Blake’s Captain Kirk: a secondary character who was much more interesting than the more conventional hero, who arguably won more affection from the fans than the lead character. Unlike Spock, Avon eventually captained his own ship.

Avon’s sparring with Michael Keating’s Vila – and the amorality which led him, despite himself, to fight the Federation – was an inspiration to J. Michael Straczynski in planning Babylon 5. Straczynski recalled that he watched Blake’s 7 open mouthed with astonishment: here was a starship crew who didn’t like each other. That conflict and sparring of the crew carried over into the rivalries on Babylon 5.

Paul Darrow also appeared twice in Doctor Who. His first role was in Doctor Who and the Silurians as Captain Hawkins, one of a series of high-rankers who appeared opposite the Brigadier before Captain Mike Yates arrived as a fixture in Season 8. After Blake’s 7 was over, Darrow, like Jacqueline Pearce (Servalan) before him, appeared in Colin Baker’s first full season as the Doctor in 1985. Darrow was cast as the villain, Tekker, in Timelash and, baffled by the script, decided to play it as Richard III. When asked what he thought of the story, Darrow robustly replied, ‘Rubbish’. Some fans believe he understated the case.

Paul Darrow was born in Surrey in 1941 and was educated at Haberdashers’ Aske’s Boys’ School in Elstree. He enjoyed a significant stage career, playing in London’s West End and for four seasons at Bristol Old Vic. While studying at RADA, he shared a flat with Ian McShane and future War Doctor, John Hurt. Darrow had a successful and prolific career in television, appearing in over 200 shows. He married Janet Lees-Price in the mid-1960s, and they were together for 48 years before her death in 2012.

In 2014, Darrow had both legs amputated – one above and one below the knee – following an aortic aneurism. He carried on acting, voicing soundbites for Jack FM and Union Jack radio stations. Darrow wrote a Blake’s 7 novel, Avon: A Terrible Aspect (1989) and an autobiography, You’re Him, Aren’t You?, published in 2006, and picked up by Big Finish for an audiobook.

He will be greatly missed. So much so that we’ve got another tribute coming up on the DWC later today.

by Frank Danes time to read: 2 min
News Rafe Spall Was Asked to Be the Doctor – But … 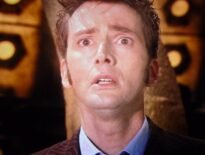