Alright, mate? I can see you’re a man of the world. You look like someone who likes a bit of fun, know what I’m saying, squire? D’you wanna come down this back alley? Want to show you something I got in my mac you might be interested in. That’s it, guv, step this way. Not overlooked, are we? Nah. Champion! Hold on, I’ll just take a quick shufti around, just to be on the safe side. Never know when the rozzers might be lurkin’ somewhere, see. Right, we’re fine.

’Ere you are. Whatchoo think of that then, eh? Magic, innit? Lovely. A bit fruity, wouldn’t you say, squire?

That’s a Dalek, that is. It ain’t got no clothes on. Naked as the day it was born. Or built. Whatever. Phwaooar, though, eh? Eh? It’s got more pictures of it inside: look at that! Cor, wouldn’t mind seein’ some of that in the pub on a Saturday night, know what I’m saying? Look at them curvy bits and all them protuberances! All them probes on it! Magic, eh? Hurhurhur.

Oh yeah, there’s some bird with it as well. Dunno who she is. But never mind the dame: look at that Dalek! Them burnished surfaces! Them smooth lines! Them lovely bumps!

Tell you what, I can do you a deal. Three hundred quid, cash.

What? You’re not interested? Listen, son, there’s blokes out there who’d pay a grand for this. It’s an original, too, not one of them fan reprints. It’s a little bit of history, it is, a bit of our heritage. Come on, I can see you want it really, you got that look in your eyes.

All right, don’t then. Don’t know what’s got into youngsters these days. Time was I could make a mint selling pics of Daleks. It’s all that political correctness, that’s what it is. Can’t get rid of nudey Daleks for love nor money these days.

Oi! Anyone want to buy some postcards of Sea Devils in revealing fishnets? Naked as the day they was hatched!

Girl Illustrated volume 8 number 10 was published in 1977 by some Dirty Mac Brigade outfit. It cost 55p and was not for sale to anyone under 18. By today’s standards (not that I’d know, of course!), it’s very tame. A fan reprint was produced in the noughties; originals go for a minimum of £250 on eBay and they’re very rare. As far as we know, Katy Manning was the only lead actor from Doctor Who to have appeared in this genre of literature.

I guess it ought to be said that this sort of stuff is ethically dodgy; it’s not very respectful to ogle people, especially when they pose for such things when they’re down on their luck: Katy said she was broke and did it for the money. That said, she later commented you’d need a magnifying glass to see anything, and she’s not expressed regret for doing the photoshoot. Girl Illustrated volume 8 number 10 wins the award for the dodgiest piece of Doctor Who merchandise produced so far. 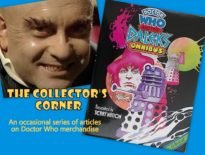