You can now pre-order the final instalment in the five-book Lethbridge-Stewart: Bloodlines sequence of novels from Candy Jar.

Continuing on from The George Kostinen Mystery, Foreword to the Past is written by first-time novelist, Baz Greenland and sees our heroes finally joining forces as they travel through time to save the universe itself.

“Originally entitled Back to the Past, this final part of the sequence was going to be co-written between me and Baz, but after seeing how effortlessly he wrote his short story, The Dinner Party, I decided to step back and let him write it on his own. Baz and I go back a few years now, 2014 I think, and we met when I did a talk at Rhydypennau Library on the companions of Doctor Who. His son displayed a remarkable knowledge of Doctor Who, and I soon got to talking to Baz himself. Since then we’ve often talked about writing, and Baz’s interest in such. As ever, it was just a case of finding the right story for him, the right opportunity. And here we are.”

Baz Greenland has written two plays for the Manchester Fringe theatre scene and a script for online comedy series, Supermarket Matters. His first published prose work was The Dinner Party in last year’s The Laughing Gnome: The Havoc Files collection.

“As a big Doctor Who fan, writing for one of the show’s most iconic characters has been a dream come true. I am incredibly grateful for Andy and Candy Jar Books for giving me the opportunity. With their support, I’ve been able to achieve my dream of seeing my name in print. I cut my teeth into this world with The Dinner Party last year and it’s been an absolute pleasure – and a challenge – to go bigger with Foreword to the Past. Getting into the minds of Lethbridge Stewart, Anne Bishop, George ‘Hobo’ Kostinen, and real-life hero Eileen Le Croissette has been a privilege. I’ve also had the duty of bringing to a conclusion a number of threads running through the Bloodlines series and I hope I’ve done it justice!”

“With four heroes, it made sense to have two plot threads, and so from the outset of developing Bloodlines, it was essential that the threat not only be directed at Lethbridge-Stewart’s family line, but also Anne’s. The culmination of this sends our heroes into the past – specifically the 1967 Doctor Who serial, The Abominable Snowmen and an event referenced both in Baz’s short story, The Dinner Party, and the book three of Bloodlines, An Ordinary Man. While one team of heroes have to avoid changing the past and interacting with established events, the other team have to ensure that Lethbridge-Stewart’s grandparents meet and fall in love. Both classic sci-fi tropes, and both wonderfully spun into a fun yarn by Baz in Foreword to the Past.”

“Foreword to the Past is an epic adventure, filled with lots of wonderful character moments. Getting into their heads, understanding what makes them tick, is what really drives me as a writer and I’ve really put these four heroes through their paces. From a new twist on a classic Doctor Who story to 19th Century France, I wanted to use real and fictional past events to shape the story. On screen, Anne and Lethbridge-Stewart never got to go travelling through time. In Foreword to the Past, I give these characters just that.”

The cover is a return engagement for the artist responsible for The Lucy Wilson Mysteries’ covers, Steve Beckett.

“Foreword to the Past is my third piece of cover art for the Lethbridge-Stewart series. Each cover I have worked on has called for a slightly different art style from me which is great fun and certainly stretches me as an artist. This cover gave me the challenge of developing the look of Hobo who first appeared on the covers of the Lucy Wilson series. The Lucy book covers are very cartoony and Hobo is very simply drawn, so for this book he needed to look more real. The author’s description of Hobo dictated his dress sense and included Hobo’s trademark hoody, but I had to develop his facial features, which was tricky considering his lack of hair and eyebrows! I settled on using my eldest son, Ethan, as a starting point, imagining him without his hair. I wanted to make sure Hobo still had his wide piercing eyes and I think it worked out well. Hobo is probably relieved that he is not being attacked by some alien beastie on this cover for a change!”

The Accord has assembled its team from various realities: Lethbridge-Stewart, Anne Travers, Eileen Le Croissette and Hobo Kostinen. They have been given their missions…

For Hobo and Eileen, it is a trip to 1935, and Tibet. There they must ensure that anthropologist Edward Travers is not killed. If they fail, he will not go on to meet the Doctor, nor will he go on to father Anne Travers, undoing decades of future history.

But there is a mysterious force at work, targeting both time zones simultaneously. One determined to erase the bloodlines of both the Lethbridge-Stewarts and Traverses, and if it succeeds, the very future of the universe will completely fall apart.

Our heroes must use every skill they possess to protect and restore time, and make sure that the Lethbridge-Stewarts and Traverses go on to protect the future of Earth!

Foreword to the Past will be followed by the final book in Lethbridge-Stewart Series 7, a sequel to 2015’s The Schizoid Earth and a final trip into parallel realities, I, Alastair by Robert Mammone.

You can order Bloodlines: Foreword to the Past from Candy Jar now. 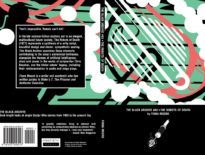