At 10pm (BST) tonight, the first episode of the brand new Timeslip series from Big Finish will premiere as a livestream on YouTube, giving fans an exclusive chance to listen for free.

Throughout the YouTube premiere, listeners are invited to post their reactions on Twitter using the hashtag #Timeslip, where actor Spencer Banks (Simon), director Helen Goldwyn (@HelenGoldwyn), and writer Andrew Smith (@andr3wsmith) will also be joining the conversation.

The show was originally an ITV series broadcast in 1970, which followed two children, Simon and Liz, on their adventures through a ‘time barrier’ as they journeyed to the past and future. 50 years on, the series returns as a full-cast audio drama, with the original cast (Spencer Banks and Cheryl Burfield) playing the adult Simon and Liz as they meet new allies and enemies.

How can you get involved and listen for free?

All you need to do tonight (that’s Wednesday 6th May 2020) is head to the Big Finish YouTube channel and join the livestream of the first episode of Timeslip: The Age of The Death Lottery.

Follow @BigFinish on Twitter, or click on the #Timeslip hashtag to see what people are saying and add your own comments (but make sure you don’t drop too many spoilers for those who aren’t listening live!).

It’s as simple as that!

Decades after their childhood experiences passing through a mysterious ‘time barrier’ that could transmit people into the past and the future, two adults – Simon Randall and Liz Skinner – encounter two youths from the 1980s, Neil and Jade… and realise the barrier is open again.

Following them through the barrier in search of a missing friend, they find themselves many years into the future, when over-population has brought the Earth to its knees. So a radical reform has been undertaken – a mass culling of parts of the population known as the Death Lottery. Not everyone supports this idea. Rebels know as refusers battle the government and the sinister Enforcement Bureau – and Liz discovers that her old friend Charlotte may be responsible for the whole thing.

You can order Timeslip: The Age of The Death Lottery from Big Finish now. 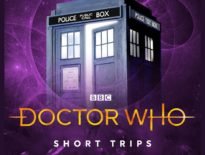