Reviewed: Once Upon A Time Lord – The Myths and Stories of Doctor Who

Once Upon A Time Lord (first published in February 2020) is an excellent, stimulating, and witty academic study of Doctor Who by Dr Ivan Phillips of the University of Hertfordshire, UK. It’s one of the best studies of the programme – actually, the whole multitext of Doctor Who – that I’ve ever read. An academic work, it is highly accessible to the general punter. It’s also, often, very funny: you have to love an academic who, in a discussion of the changing portrayal of the Nestene Consciousness across the texts, reproduces Alan Willow’s very, very bad picture of the Nestene from the novelisation Doctor Who and the Terror of the Autons with the caption, “Coloured in by the current author as a child”.

Dr Phillips’s knowledge of Doctor Who is jaw-droppingly impressive. He wonders if there can be any fan who is familiar with every story in every manifestation of the programme – who know their John and Gillian as intimately as their Amy and Rory – but, if such a pan-dimensional reader exists, I would suggest it is Dr Phillips himself. He also clearly loves Doctor Who and his zeal fizzes on every page. Rather than concentrating wholly on the television programme, he ranges widely across the novelisations, the Amicus films, the stage plays, the audio versions, the fan video spin offs, fanfic, The Fishmen of Kandalinga (!), and so on and so on, as all of these constitute Doctor Who, the text.

Once Upon A Time Lord considers Doctor Who as myth.

Dr Phillips argues is that there is so much Doctor Who, even if we only consider the television programme, that it can’t be hammered into a coherent canon or uncontradictory narrative that moves forward in a linear fashion. Rather, the text, across all media, functions as a mythic narrative. In the same way that stories are told about Hercules and Jason, and these stories vary according to the teller, the period and the audience, so stories are told about the Doctor.

He/she is a mythical figure, with different narratives at different times in different media stressing different aspects of the tale which are sometimes mutually contradictory. Is the Doctor a timeless child? A Prydonian renegade? Half human on his mother’s side (ssh)? A survivor from the Dark Time of Gallifrey and a founder of Time Lord society? All of these? None of these? The ramifications of Dr Phillips’ thesis are that it doesn’t matter. Nor do conventions of canon: ideas of what’s canonical and what isn’t, in the end, come down to which aspects the individual viewer likes (which she therefore declares to be canonical) and which she doesn’t (which she declares to be heresy). Contradictions in myth don’t matter.

Once Upon A Time Lord also considers the treatment of myth in Doctor Who stories and there are excellent analyses of, for example, the haunted house episode of The Chase, the Falls of Atlantis in The Time Monster and The Underwater Menace, and the continual appearance of minotaurs, or near minotaurs, across the years. Yes, the Nimon clump through the pages in their platform boots, and a good thing too.

Dr Phillips also considers the question, is Doctor Who any good?

As a fan who worries about internal continuity and gets bad tempered about retconning and lead actors putting the wrong emphasis on “Metebelis Three”, I found this book enormously liberating and exciting. I also learned a great deal about screen theory, modernism, post-modernism, and the history of the moving image. Dr Phillips’ book thrills with an affection and enthusiasm for Doctor Who in all of its/his/her guises. This is no dry academic study, but shares the quality of the best of all criticism: it sends you back to the original text. I have about 100 episodes which now crave rewatching … and where have I put my copy of The Fishmen of Kandalinga?

Buy Once Upon A Time Lord. Read it. Enjoy it. I enjoyed it so much, I forgot about being in lockdown.

Once Upon A Time Lord by Ivan Phillips is published by Bloomsbury Academic. Amazon price: £12.99 for a physical copy, £9.94 for a Kindle edition.

Reviewed: Once Upon A Time Lord – The Myths and Stories of Doctor Who 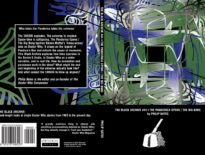