This week saw the release of the anticipated encounter of the Tenth and Fourth Doctors, respectively played by David Tennant and Tom Baker, uniting against the Daleks in the first of a new Doctor Who Big Finish trilogy, Out of Time.

But there is more to it. The remaining two releases will feature the Tenth Doctor reuniting with the Fifth (Tennant’s father-in-law, Peter Davison) and Sixth (Colin Baker) incarnations, who will battle two other familiar foes.

Here are the details confirmed:

The Gates of Hell by David Llewellyn

The Tenth Doctor joins forces with the Fifth Doctor to fight the Cybermen in the Catacombs of Paris.

The Tenth and Sixth Doctors take on the Weeping Angels on a distant planet where no one has the power of sight.

So… considering that both Tennant and Davison appeared on screen together in 2007 Children in Need special Time Crash, I’m keeping my fingers crossed for a sneaky little reference. And Wink is also a very interesting title for the Weeping Angels story, as it rhymes with Steven Moffat’s universally-acclaimed episode.

“Why do we love multi-Doctor stories? I suppose it’s the band all coming together, isn’t it? I remember as a kid I’d read about things like The Three Doctors and could only imagine how exciting that must have been. And then The Five Doctors happened and, well, five Doctors didn’t really get together in the end but three Doctors and a man in a wig and some clips of Tom Baker all got together, and that was exciting enough. Just the idea that Doctors should come together, it’s exciting.”

While it’s disappointing that we have to wait until June 2021 and July 2022 for the next releases, we do have the first one to keep us Whovians entertained in the midst of a global pandemic. Despite each story being recorded under lockdown, I am puzzled as to why the release dates have been scheduled for much later on instead of sooner.

“We were in a planning meeting about a year ago. There was a pause and then senior producer David Richardson said, ‘What about asking David Tennant if he’d like to do an adventure with Tom Baker?’ We all agreed and so I texted David Tennant there and then. He replied within about five minutes, saying yes, and so we made our plans from that point on.

“Doctor Who: Out of Time has got a really neat idea in it that brings the Doctors together. It gives them both a lot of space to be quintessentially their Doctors, while also giving them a lot of interaction with each other – plus fighting the Daleks! What’s not to love about that?”

In our review of Out of Time 1, we said:

“Tom Baker and David Tennant are a brilliant Doctor pairing and the gap between the two in their own timeline highlights their different approaches when it comes to solving the mounting problems. Indeed, their relative experience fighting the Daleks is held against each other when it comes to who and how they should handle their problems.”

Written by Matt Fitton, and directed by Dalek voice actor Nicholas Briggs, Out of Time 1 is now available on CD and digital download. The entire trilogy can also be purchased as a bundle for £24.

In the meantime, you can check out this nostalgic animated trailer with Weetabix-style cutouts. 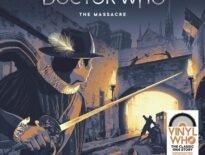 Merchandise Did You Get the Limited Record Store Day Version o… 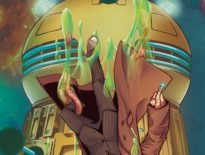