The actress Barbara Shelley, one of the icons of 1950s and 1960s screen horror and described by her agent as the ‘technicolour queen of Hammer,’ has died at the grand age of 88.

Considered a great beauty in her day, Shelley appeared in over 100 films and numerous television roles, including Doctor Who and Blake’s 7.

Barbara Shelley was born Barbara Kowin on 13th February 1932 in London. She found early work as a model, but, in her 20s, travelled to Italy to pursue an acting career. She appeared in a few ‘B’ films, but soon became frustrated with her lack of progress and so returned to the UK. In 1957, she appeared in a minor sex comedy with major stars David Niven and Ava Gardner, The Little Hut; but her breakthrough role was in another, ostensibly much lesser film that year. In the then notorious, X-rated Cat Girl, Shelley played Leonora, a young heiress who finds she occasionally possessed by the spirit of jealous, homicidal leopard.

It was this role that elevated the young sex kitten to the select group of ‘Hammazons,’ which includes Caroline Munro, Ingrid Pitt, Valerie Leon, and Kate ‘The Rani’ O’Mara. Over the next 10 years, Shelley became Hammer’s most prolific leading lady, making seven films, including The Camp on Blood Island (1958), The Gorgon (1964), Dracula: Prince of Darkness (1966), Rasputin: The Mad Monk (1966), and the cinematic adaptation of Nigel Neill’s Quatermass and the Pit (1967). As Shelley put it several years ago,

Hammer was like a family, a very talented family and there was a wonderful canteen down there! To work with Peter Cushing and Christopher Lee… I’ve been more than lucky, I’ve been honoured. They were so wonderful to work with, both so generous as actors with a wonderful atmosphere on the set and a wonderful sense of humour.

When interviewed by Mark Gatiss about Dracula: Prince of Darkness for his 2010 documentary, A History of Horror, Shelley said,

The scene that I’m most proud of is when she’s staked… There’s absolute evil in there, when she’s struggling, and then suddenly she’s staked, and there is tremendous serenity. And I think that that is one of my best moments on film.

Notably for British SF fans, Shelley played the ill-fated Dr Plaxton in Series D of Blake’s 7 (Stardrive, 1981) and Sorasta in the Season 21 Doctor Who story, Planet of Fire (1984). In this story, filmed on location in Lanzarote, Shelley had the pleasure of playing opposite Peter Davison’s Fifth Doctor, Anthony Ainley’s Master, and cult favourite Peter Wyngarde as Timanov.

This was also the debut story for Nicola Bryant as a certain Miss Perpugilliam (Peri) Brown. On the news of her death, Bryant wrote warmly of Shelley,

Shelley’s last TV credit was the miniseries The Dark Angel in 1991, but she did return to the world of Doctor Who – perhaps – in the 1992 Bill Baggs film More Than a Messiah, opposite Colin Baker as ‘The Stranger’ and Nicola Bryant as ‘Miss Brown’. Shelley said she ‘adored’ science fiction and was receptive to a genre that was considered to be somewhat less than respectable.

When I was a very little girl my father used to have all these science fiction magazines and we used to go through them together… My mind had been opened up to science fiction by my father so when I got these scripts it wasn’t ‘what’s this rubbish?’ it was ‘that’s interesting’.

As the ill-fated Dr Plaxton.

Shelley retired from acting in 1988 to concentrate on interior design. She died this week after apparently contracting COVID-19 while in hospital for a check-up. Reflecting on her life in 2009, she noted,

Barbara Shelley is gone, after giving the world a great deal of glamour and fun. Let us hope she found also found serenity in the end. 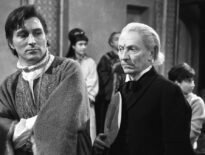 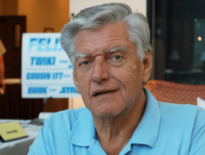