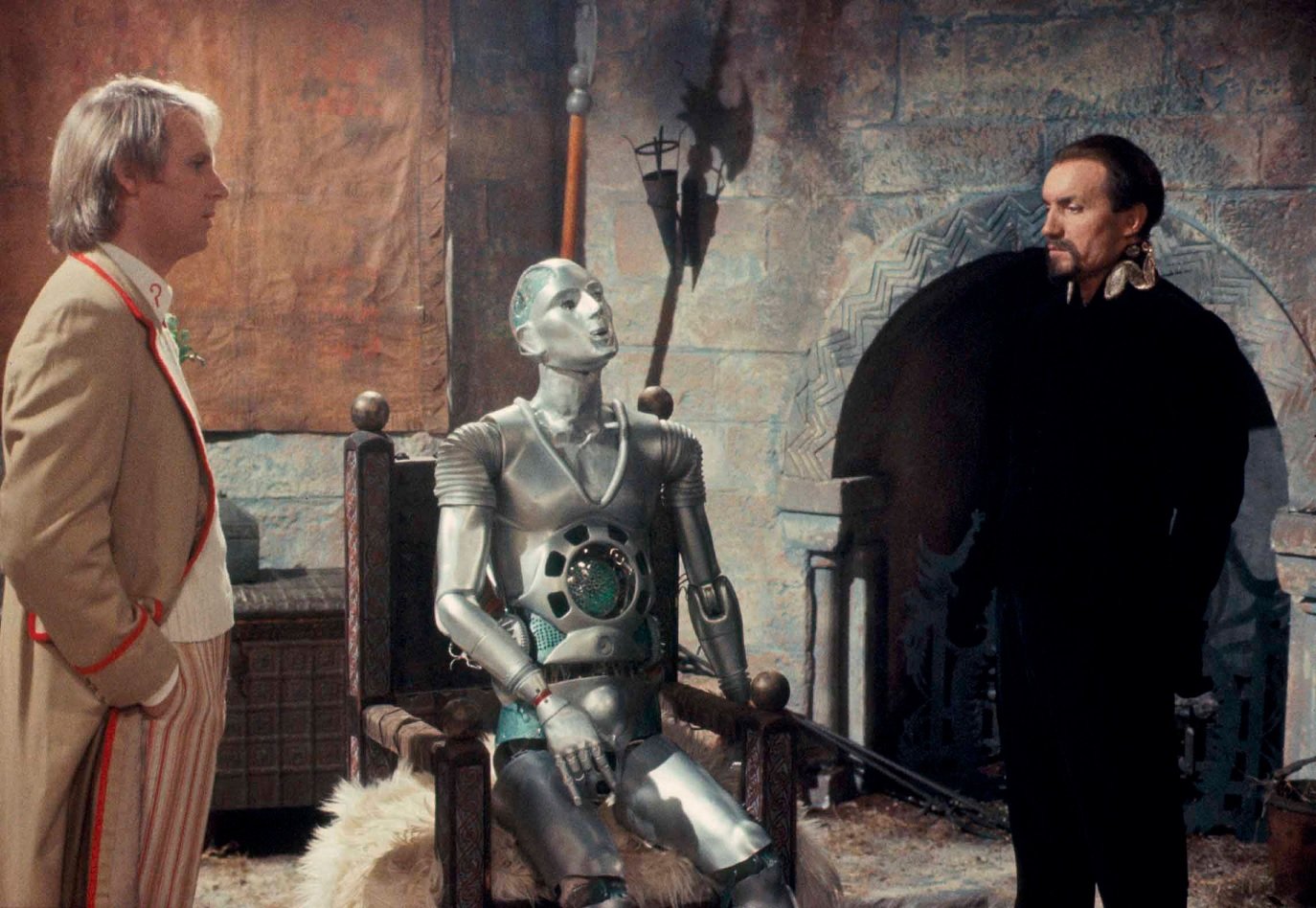 We’ve recently been talking about companions in general. The useful and the useless. But then you have the rare case of the non-starter companion. The one that never really got off the ground. Kamelion.

I’ll say this for John Nathan-Turner. He thinks big and knows what he wants. Though at times, with his creative appetite, his eyes were bigger than his stomach.

In The King’s Demons, near the end of Season 20, he introduced Kamelion, a shape changing android. Originally being utilized by the Master, the character eventually changed sides and the Doctor offered him a place on the TARDIS.

Kamelion could take the form of anyone, so any actor could play him at any time. There was one problem though. Kamelion was an actual prop that barely worked. Any problem the production company had with K9 back in the day was multiplied tenfold by this man sized, useless, computerized biped, who could only make very limited movements. Kamelion was usually seen propped up against something or sitting down, ever so slightly moving his head or arm. He couldn’t even manage to walk.

He wasn’t used much because of his limitations and the whole experiment was a bit of a bust. Worst of all, Kamelion’s operator, Mike Power, tragically died in a boating accident, and was the only person who knew the operating codes to control the would-be companion properly.

I just don’t think Nathan-Turner was familiar with the limitations of 1980s robotics on a 1980s BBC budget. Perhaps he should have been. Maybe Power or someone else tried to tell him, but he wanted to forge ahead anyway. I don’t know, but the folly of Kamelion was not JNT’s finest hour.

I can understand Nathan-Turner wanting to show the world that Doctor Who could manage to create something unique and surprising here — a truly automated man-sized companion. But it just wasn’t realistic for the time. Really, if the prop could have just walked around the console room a bit, be able to move just a little more, that would have been enough. Then he could shape shift into an actor who would have been his “default” shape setting. We wouldn’t have had to even see the prop that much. But it just had to be convincing for short scenes and even that wasn’t possible.

It’s a real shame, and, I think, avoidable. After all, Nathan-Turner had other options.

Instead of spending the money on the prop, it could have been spent on an android suit of sorts, not too dissimilar to C3PO. The actor voicing Kamelion, be it Gerald Flood at the time or anyone else, could have been who wore the suit but also who Kamelion shape shifted into on a regular basis to blend in.

Talk about a useful companion — talk about potential! Kamelion was pretty much a blank slate. He could be anyone, probably had an impressive computer mind, some level of enhanced strength, and could have stuck with the Doctor and company to learn about emotions, and life in general.

Done correctly, Kamelion would have been an even more fascinating character than Data on Star Trek: The Next Generation — and beaten TNG to the punch by four years!

Imagine, after a certain amount of time, if he started to have feelings for another character in the TARDIS, like Tegan? Imagine if she reciprocated? Granted, I think that level of narrative might have been a bit much for classic Doctor Who, especially in the ’80s. I’m also not sure if the production team could have handled the execution, but it’s an intriguing thought nonetheless.

But it’s no longer the 1980s. Emotions and romantic entanglements in the TARDIS have come a long way since Classic Who.

What if Kamelion were brought into the show these days? When you think about it, Kamelion’s a natural for today’s audience. The term “gender fluid” has perhaps never been more accurate in a sci-fi character.

Kamelion, though, is almost a bit too good to be true. With its many android abilities, you’d have a character nearly as impressive as the Doctor. A companion that could effect a total physical and mental change even more regularly than the Doctor!

Is Kamelion a worthy character? I’d say so. The sky is pretty much the limit. It’d be nice if Doctor Who reintroduced the character at some point in the future.

Features The Order of the Master: Why Can’t The Docto…