Doctor Who has had an odd relationship with video games. There are a plethora of Star Wars and Star Trek games, but the other sci-fi giant is sadly lacking. However, it seems that one game was in development to coincide with the show’s return in 2005.

The game would have used Christopher Eccleston’s Ninth Doctor and Billie Piper’s Rose Tyler, according to Paul Callaghan, a designer who worked on the game. He states that there was no clear commitment to platforms or gameplay elements. It seems they struggled the same way many have in creating a Doctor Who game.

“The trick is to find a way to make them a bit more active,” said Callaghan. Whilst Doctor Who features many big monsters and explosions, the Doctor does not act like a standard video game protagonist. Recreating the way they deal with problems would have been difficult in a game, particularly in the early 2000s.

This didn’t stop the BBC trying later on. I am sure many readers can remember when the Doctor Who website was filled with little Flash games. I particularly remember one where you went on an isometric rampage as a Dalek. Sadly with the recent death of Adobe Flash plugins, it seems we won’t be playing them any time soon.

“When it was cancelled, I had to take a step back to work out whether or not this was the career I wanted to pursue. Ultimately, I wouldn’t change any of it. It was a unique experience and I learned a huge amount. It gave me the chance to follow the dreams of an 11-year-old me, and how many people can say they were paid to work on a Doctor Who game?”

More involved games would come with the arrival of Matt Smith’s Eleventh Doctor. The Adventure Games mostly features stealth gameplay and item collection. They were fun, but limited. Having the cast lend their voices to their digital counterparts did help.

How do you think Doctor Who could best be turned into a video game? Personally, I think Lego Dimensions did it best.

News Russell T Davies Warns that the BBC is Doomed 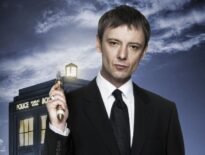