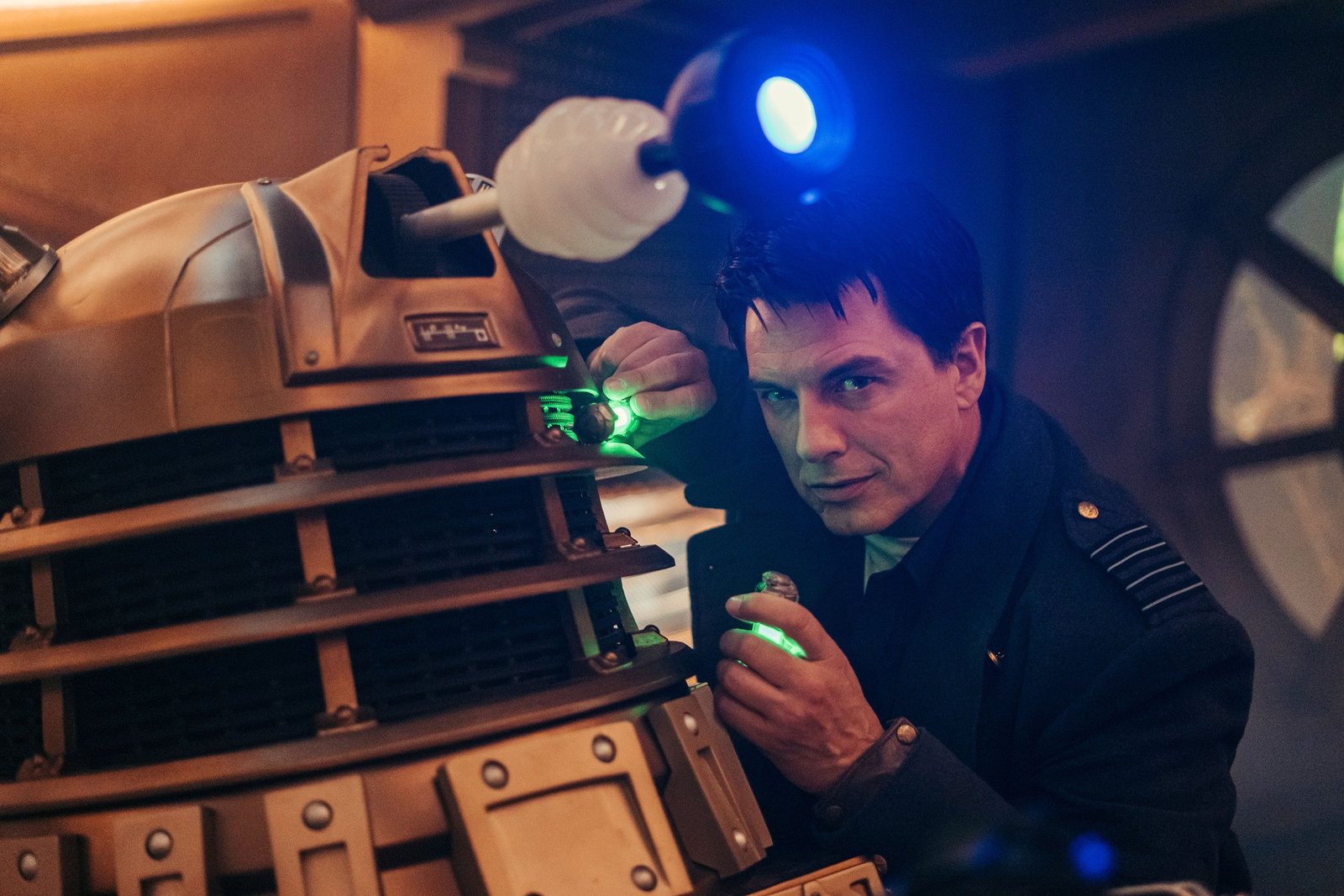 It’s been a little while since we last saw the Thirteenth Doctor and the events of Revolution of the Daleks have bedded in. Graham O’Brien and Ryan Sinclair have now left the TARDIS and the next series of Doctor Who is being filmed right now. Fortunately, it’s always a good time to look back, so today we spotlight the New Year’s Day special.

In his review, Frank Danes was less than impressed, noting:

“It took some 15 minutes to get the Doctor out of prison and I was reminded of Revelation of the Daleks, where the Doctor and Peri spend the whole of episode one wandering up to Tranquil Repose before they actually engage in the plot. Jack gets the Doctor out of prison but John Barrowman, like all the actors, seemed underpowered and de-energised, saying his lines slowly and lacking the zest of the character we used to love. The climactic battle between Dalek factions took about three minutes to play out on screen, with little Daleks on the Clifton suspension bridge in Bristol shooting at each other like Space Invaders. Ho hum. Extras stand around waiting for the Daleks to exterminate them. It’s the slumbering slaves from Destiny of the Daleks all over again.”

But what about the rest of the DWC team? We rounded them up, bringing them in from the fields, and quizzed them about what they thought about the latest Thirteenth Doctor story.

We start with Tony Jones, who… well, you know what? Read it, then we’ll talk.

So. After ‘that’ 2020, 2021 kicked off with a new Doctor Who, but really it was as much about bidding farewell as it was starting afresh.

We’d long known Bradley Walsh and Tosin Cole were off to pastures new, and really could have gone after their first series. This story did its best to give their characters some closure but I’m not sure it was enough.

It was hello to Jack (again) and after his usual ebullient arrival he actually calmed down and drove the defence of Earth against the latest version of the Daleks. Is it a farewell? The odds must be heavily in favour of his return.

The Doctor, meanwhile, took an overdue rest break in yet another prison. Time to make sense of the Chibnall Master Plan or just to convince herself it was yet another trick of the Master’s? It looks like we’ll find out in the next series (as and when it arrives).

In the end, Revolution of the Daleks wasn’t as dire as it might have been, but nor did it do justice to either the plot or the characters. There was room for more exploration of both, and a better story were this split into two parts over Christmas and New Year’s. Then again, what do I know!

Okay, so the interesting thing about Tony’s review is that he wanted to have a bit of a laugh and do it before he’d seen the episode, to see how much he got right. Pretty near the mark, I’d say!

Everyone else reviewed the episode in the traditional method…

I was in two minds whether to watch the festive special. The events of The Timeless Child had sullied things a bit, but I have to admit, having recently upgraded to a larger television, that the lure of viewing something in 4K was the draw (I wonder if that draw will help the total ratings). Thus, despite having the episode recorded on the TiVo, I dipped into my smart TV’s iPlayer app. Regardless of having broadband fibre optic to the front door and a ridiculously high download speed, the episode refused to load. Too many people accessing at the same time, maybe?

Plan B: see if the iPlayer app on Virgin’s TiVo box is any better. Ah, success; and here we go…

The episode wasn’t bad. When it finally got going and we got passed all the moping about and the obligatory tiny political digs, it was action packed and visually good to look at. The best tension of the episode was the attack on Yaz and Jack by the out-of-their-case Daleks in the cloning chamber. A nice little nod to Ridley Scott’s Alien during that sequence too, with the Dalek ‘face-hugging’ Captain Jack.

Ah yes, Captain Jack. As nice as it was to see Captain Jack again, he pretty much made the rest of the “fam” redundant. Probably pushing poor Graham out of the way more than the others.

The episode got quite gritty; we had scenes of human slaughter and a small battle between the Bronze and the new Daleks, but the audience were told, rather than saw, that the mutant Daleks get defeated by the Bronze ones. Nevertheless, we were still treated to the big explosive finish.

Unfortunately, the episode ground to a standstill before it was meant to. The goodbyes were so drawn out, I actually shouted “get on with it!” at the telly.

Although it was quite entertaining, it just didn’t feel special. It took three days for me to get around to watching it. Up until a few years ago, I would have really looked forward to the Christmas/festive episode. I wasn’t this year. But strip out the padding – all the aforementioned moping – and there was the basis of a good old-fashioned adventure. So why didn’t it feel like something more than a regular episode? Was it that these are no longer Christmas specials? Is it that I have never really gelled with the “fam” and think that poor Jodie (and I’ve said this before) just doesn’t have the gravitas to hold the gaze as the Doctor should?

Or is it simply me? Have I just become bored with it all; ground down by the downbeat times we live in; become old and cynical; seen too much and find nothing wonderful anymore…?

To end on a lighter note and as the format’s fan, I have to report on the UHD picture quality. When the episode started playing, I didn’t initially think it anything special in comparison to normal HD. However, towards the end of the episode, I had a comparison forced on me: iPlayer completely crashed and I had to finish watching the last quarter of an hour using the off-air HD recording from the TiVo.

The HD picture was a SIGNIFICANT downgrade in comparison to the UHD picture I had been watching up to that point. Full marks to Auntie Beeb on that score. We just need to find a reliable platform for the BBC to stream its UHD content.

You know what, maybe I’m just getting soft in the head but that wasn’t too bad. At least, better than I thought it would be. Admittedly, it’s a low bar but it’s one of the better Chibnall scripts.

The prison scenes were good.

Jack did a good job overall: good interaction with the crew, good talk with Yaz, good prison break, and hey, maybe the PC angle worked to our advantage for once because he cut down on the horn dog routine a lot. Because of course he dare not say anything about Jodie.

Yaz was attempting to do detective work with her post it notes — what they could possible contain, I don’t know…

The whole plot was stable enough — evil/stupid businessman, and Prime Minister, the whole Dalek plan, as well as the Doctor’s plan to stop them, were all pretty solid, so had no problem with any of that.

The fam’s reception to the Doctor when she finally comes back after 10 months. Just silence, sulking, and a shove?!

Chris Noth either wasn’t taking things seriously, or the OTT bit was just indicating he’s not as good an actor as I thought.

Hey, nobody on Earth remembers the Daleks, even after they were tearing apart Earth, killing thousands. Mind you, people were just standing around, pulling out their phones to take pics of them at the big reveal. People are stupid — maybe Chibnall accidentally got that right.

Now, the fact that Yaz is in love with the Doctor is fine. Rose was, Sarah Jane arguably was, Martha was, no biggie: that’s not the bad thing. Heck, even if the Doctor starts to reciprocate in any small way, that’s already got precedent because of ol’ Casanova Tennant. One hopes the writing is subtle (good luck). No, the BAD thing is that there will be a whole section of fans that will just grab their pitchforks and torches and start screaming about a gay agenda and other stupidity. THAT will be bad and of course they’ll do it.

Ryan being either a jerk or sulking through the episode.

Or strangest of all, Ryan dispensing wisdom? How is that even possible?

I guess Ryan never seemed to be enjoying his time during their adventures, so sure, I guess sulk and leave.

And I’m sorry, the planet needs him?

Did… did the planet “tell” Ryan this?

Graham and Ryan start telling tales at the end about stories they’ve heard…gravel men? C’mon, these two are just making stuff up now. It’s all they got.

And my god, finally we had emotion, we had hugs, and seemingly, some form of love! Could have used that three years ago.

Finally, the biggest laugh of the night. Who the heck is John Bishop? Sounds like a nod to Monty Python.

Are we supposed to know John Bishop? Is he a deadly spy? Is that the actor’s name or the character? (He’s not A Thing in America.)

And why do we need a third companion in the TARDIS? Yes. I knew Chibnall couldn’t leave it alone.

Back to the corner, Yaz. John Bishop’s going to be much more interesting.

One of the most enjoyable episodes in a long time, I thought. Plenty of Daleks, Captain Jack, and another Downing Street occupant meeting a sticky end (the job of ‘Doctor Who Prime Minister’ must carry seriously high life insurance premiums) were more than enough to keep me entertained after what had felt like a rather thin Christmas in terms of TV offerings.

The writing felt more assured than it sometimes has lately, with Jack Robertson not as cartoonish as last time. It was a nice touch that, echoing so much of what is going on in the world politically, he brazened it out and faced no consequences whatsoever. John Barrowman was used well, making a decent-sized contribution without being overwhelming. Maybe the price of Jack’s return was Graham not having much to do – it would have been nice to see him more involved in his final story. But it made a nice change to see companions leave the TARDIS at a moment of their own choosing, rather than those rather elaborately done deaths-that-aren’t-quite deaths of the Capaldi era.

I am he and he is me and so is she
Nick Briggs puts us together
See how they run, that thing’s got a gun
That tea’s been spiked
He’s dying

I am the Time Lord
Not Gallifreyan
I am the Doctor!
Goo goo g’joob

Expert ex-perp lands in Sheffield
Factory’s dark and we can’t see a thing
See how they run, that fleet’s gonna come
See how they fly
We’re hiding
(on a rooftop)

That was the Doctor
They were the Daleks
That’s it ’til autumn!
Bye-bye for now!

So there we are: mostly pretty positive, certainly in comparison to the Series 12 finale, with some slight niggles. What did you think, dear readers?