Out Now: 100 Objects of Doctor Who From Candy Jar Books — So What’s Inside?

100 Objects of Dr Who, written by me, is out now from Candy Jar Books.

It’s been a huge project, summing up Doctor Who in 100 objects — that sounds like a lot, but in it, I wanted to cover as much as I possibly could, from the details you’d expect (the genesis of the show, changing leads, anniversary celebrations, producers, its revival, etc.) to the stuff other books generally don’t include, like:

It was a lot of fun to write and I sincerely hope it’s fun to read too.

100 Objects of Dr Who is available to order now exclusively from Candy Jar. It’ll be available through standard retail stores at a later date (hopefully when the threat of Coronavirus has eased).

Out Now: 100 Objects of Doctor Who From Candy Jar Books — So What’s Inside? 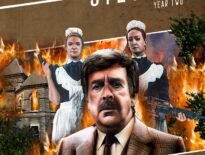 Merchandise Available to Order Now: The Haunting of Gabriel Ch…