Candy Jar Books has announced the the second book in its ninth series of Lethbridge-Stewart novels.

The Overseers is the first novel from author James Middleditch, who had previously written two short stories for the series.

“From the first time I read James’ first short story, Piece of Mind, I knew I had found a very good author. And it was after his second short, Latent Image for The Laughing Gnome anthology, that I knew it was time to test him on a novel. By that point plans were underway for the final eight Lethbridge-Stewart novels, which meant if I was going to use James, there would be no better time. James’ inventiveness is matched easily by his enthusiasm, and that shows in his writing. It took a few attempts to break his story, slotting in a few new elements and characters, but when the idea was locked down, James’ true skills came on full display.”

“I’ve loved spending time reading about these characters over the past few years and was thrilled to be able to write a couple of short stories featuring some of them. I was then asked to pitch a story for a full novel, and was quite overwhelmed to be selected. This will be my first published novel. Nothing quite prepares you for the task, so I’m grateful for the guidance Andy has provided throughout.”

“It had been some time between finalising the outline and the first pass edit of the completed novel, time during which I had worked on a lot of other projects, so in many ways it was a nice surprise to read James’ book. I recalled only bits of the outline. What I discovered was some very sharp writing, in a book that exemplifies the what Lethbridge-Stewart (and indeed Doctor Who) does best, telling a good adventure story by playing on common fears and issues with modern culture. An even more clever task, considering the book is set in 1971.”

“Chapter planning was a great intermediate stage, although I’ve learned that these have to evolve as things progress and new ideas emerge. Spending an even more immersive time with these characters has been a pleasure. They have always felt so real, especially in the face of extraordinary things, and I feel privileged to have contributed one of their full adventures, especially as the series heads to its conclusion.”

“I’ve taken the chance with The Overseers to show off (and embellish!) some of our own local history here on the South Coast of England, while also exploring some very contemporary debates about surveillance and control. A few news stories have even broken during the time I’ve been writing that seem frighteningly close to the fiction. That blurry boundary between reality and speculation is an ideal one for our team of familiar characters to navigate. Likewise, the point between the past and the future, where each exerts a pull, is a great one to have taken them, and I hope readers enjoy going there too.”

The cover sees the return of popular artist Adrian Salmon, hot off his work on the animation, The Evil of the Daleks.

“I loved the ICUs the moment I read the brief – it’s such a brilliantly simple idea, yet incredibly creepy: big brother on legs. I felt there should be a big bold drawing of an ICU with gun arm raised to catch the readers eye, whilst the rest of the montage hinted at scenes from the story. The speeding Volkswagen T2 Camper gave the cover a sense of movement, and all that was needed was Anne and Lethbridge-Stewart to complete the design.”

Here’s the blurb for The Overseers:

The Fifth Operational Corps is preparing for the future, but are horrified to see the shape of things to come.

A new form of surveillance is spreading across the South Coast of England. The British people are being shown a new kind of peace, but at what cost? Brigadier Lethbridge-Stewart and his team fear it may already be too late when this revolutionary method of control extends its reach through the ordinary city streets.

There are other secrets at work too, stretching from the past through the hidden world beneath the surface.

With nowhere to hide, Lethbridge-Stewart, Anne Travers, Bill Bishop and Samson Ware must find new allies. With their own histories part of the pattern and the fate of the country at stake, can they resist a force that’s closing in from every direction?

The next book in the series will be Blue Blood by Chris Thomas.

The Overseers is due out at the end of October 2021, and can be pre-ordered now either on its own or as part of the series 9 bundle. 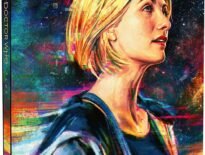 Merchandise Flux on Blu-ray: Doctor Who Series 13 to be Releas… 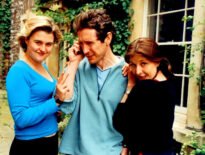