It’s Part Two of Flux (aka Doctor Who Series 13) and, although the pace doesn’t slow down after last week’s frantic opener, it is at least becoming a little clearer as to what’s going on. Time, having being held in check by mysterious guardians the Mouri, has been disrupted and is beginning to run wild. The Sontarans have taken advantage of the chaos to seize the Earth, make war throughout history, and ride horses. This season’s big bads, Swarm and Azure, are also seizing the moment, though their plan has yet to be revealed.

Casual viewers may well have felt a good deal of sympathy with Mary Seacole’s on-the-nose comment that “I don’t understand any of this” and, whilst it certainly marks a departure from recent years to have an over-arching story played out over several weeks, I can’t help feeling that the production team are struggling to find a consistent tone.

War of the Sontarans certainly opens with an arresting image, with the Doctor haunted by a weird rickety house in the sky. There’s no time to dwell on that though, as the regulars find themselves on a Crimean War battlefield and, thanks to Mary Seacole, it quickly emerges that it’s not Russian troops that the British are up against.

Sara Powell does a good job in conveying Mary’s courage, resourcefulness, and commitment to helping the wounded, and it’s nice to see Doctor Who playing its part in raising awareness of a historical figure who has only recently begun to receive the credit she deserves (do check out Jordan Shortman’s valuable primer for a guide to Mary Seacole’s achievements).

But it’s an enduring problem with these celebrity historical episodes that once the monsters turn up, they become just another guest character caught up in events. And shouldn’t the Doctor have felt just a bit guilty at getting Mary to keep watch on the Sontaran encampment when there are patients to treat?

I probably wasn’t alone in hoping that, having watched with a pained expression as the Sontarans increasingly became comedy characters in Doctor Who, this reappearance would see a return to the ruthless warriors of their earliest stories. But, with the honourable exception of a grim dockside execution scene, it wasn’t to be and instead it was bad shooting, frying pans, and an inability to stagger their rest breaks that saw them defeated. Ah well, maybe next time…

Swarm and Azure are proving to be effective villains, genuinely creepy and unsettling, even if the ‘evil from the dawn of time’ stuff doesn’t feel terribly original. They seemed more camp in this episode (and not just because of the shoulder pads) but stayed the right side of that, and how wonderful to have a proper ‘how will they get out of that?’ cliffhanger in modern Doctor Who, even if the Next Time trailer did rather rob that of tension.

Aside from Mary, other guest characters fared less well. Vinder has yet to make an impression (though we did learn he’s “shamed, disgraced, and rejected”) and leaves me feeling that he’s filling a Captain Jack-sized gap this series. Doctor Who has had plenty of arrogant military dunderheads over the years and Lieutenant General Logan doesn’t really add anything new to the stereotype. Talking of which, Dan’s parents felt like the kind of full-on, TV trope scousers I thought had been left behind when the BBC stopped making Bread.

I will give an honourable mention, however, to Nigel Richard Lambert, voice of the Priest Triangles, who with those prissy tones was surely channelling the wonderful Peter Tuddenham, voice of Orac and other computers in Blakes 7.

Jodie Whittaker continues to give her utmost to the role, though her enthusiastic youth group leader vibe doesn’t suit everyone. She can’t be blamed when the script zig zags like it does here, calling for her to be horrified at a battlefield massacre in one scene, then forgetting all about it the next.

I’m not sure if this issue of tone is any more stark than with previous seasons. It’s an odd mix of noisy Marvel epic, slapstick kids’ show, Doctor Who Weekly comic strip, and Scooby Doo cartoon. One moment it’s mass death and disintegrations at the hands of alien war criminals; the next it’s big shaggy dogs and comic aliens who can be put out of action with a wok.

But maybe the answer is just to go with it, sit back and try to enjoy the ride. There are plenty of questions still to be answered and I’m certainly intrigued to see where Flux takes us next (although if I have my concerns about what new Who has done with the Sontarans, don’t get me started on the Cybermen) – and is that a new coat for the Doctor, or has she just turned the old one inside out? 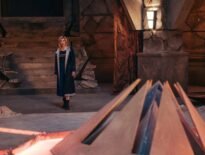 Doctor Who on TV Reviewed Reviewed: Doctor Who, Flux – Once, Upon Time 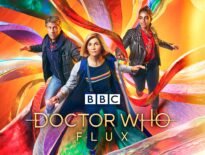