Reviewed: Doctor Who, Flux – Once, Upon Time Those who are generous enough to read my sporadic ravings may have noticed that I am not exactly deeply enamoured of the current era of Doctor Who. I don’t hate it; I don’t think it’s any good but my emotional reaction to it is probably indifference more than anything else. I don’t lie awake at night nursing my loathing and rehearsing horrid things to say about it.

That said, I wish it were better. As has been said before by other commentators, a key problem in Who these days is the quality of the regulars’ performances. Alas, that includes the central performance. Jodie Whittaker just doesn’t convince as the Doctor – or doesn’t convince me, at any rate.

We were lucky enough to have Peter Davison at the last Bedford Who Charity Con. Peter was asked whether, for an actor, playing an alien was different from playing a human. Not really, he said. The biggest difference was that it was easier to play a human because you could build up the character from what you knew about them: who their parents were, where they went to school, what influenced and interested them, and so on. By comparison, he said, very little information like that was available when you tried to build up the character of the Doctor. You had to play the lines as best you could and give as good a performance as you can. Similarly, Colin Baker hinted at one of our earlier cons that the Doctor’s perspectives were different from our own. Colin gave the example that the Doctor probably didn’t find his enormous age much of a problem; 900 years probably felt like being middle aged to him.

An actor has to inhabit a role. She or he has to give very serious consideration to the question: what would it actually be like to be this person? If I really were them, what would I feel, what would motivate me, what would make me angry, passionate, happy? What did I really feel strongly about? How did I feel about the people I met, and the people I’m close to? Was I bothered, or did my feelings run deep?

For the actor playing the Doctor, you’d also have to give very serious consideration to what it would make you feel like to have lived for an immensely long time; to be immeasurably more intelligent than the people around you; to be motivated, as Barry Letts said, by a “strongly moral” core.

I’m afraid I think this is where Jodie Whittaker fails. I don’t think she conveys any sense to the audience that the Doctor is intellectually far superior to any human being, or that she is motivated by compassion, or that she genuinely cares deeply about other people. I’ve never felt there was any real depth to the characterisation; it’s a superficial performance, without depth. It’s neither multi-layered nor multi-faceted. The one characteristic she conveys is that the Doctor is eccentric; in her playing of it, the eccentricity of the Doctor is foregrounded so much, without being balanced or offset by anything else, that the character has become a rather silly, irritating oddball, and not much else. It could even be said that she isn’t even playing a person; she’s playing a characteristic. There is certainly no sense that the Doctor is a massive personality, capable of dominating those around her or him, but (usually) holding back because there is also a desire not to swamp or crush others. The Thirteenth Doctor isn’t even particularly kindly: while she’s capable of gushing, she has no real empathy. She wasn’t exactly sympathetic to Graham, after all.

Getting more pretentious now: if you take a character like Hamlet, there are a number of different ways of playing him. I’m not sure how many actors I’ve seen (or heard) in the part; probably more than 20. Some of the most successful are those who push the characterisation beyond what you’d normally expect. (Mark Rylance did that in the Nineties at the RSC.) But there are parameters which you can’t go beyond. You can’t make Hamlet into an action hero or a dummy or a lightweight; that’s just not who he is. So it seems to me that the more successful Doctors are those who very much bring their own take to the character: who push it, but who don’t go beyond the boundaries. (The Doctor can be very funny but he’s not a comedy character; he can be brusque but he’s not deliberately cruel; he can be odd but he’s not a nutcase. And so on.)

My own view is that Jodie Whittaker just doesn’t really get who the Doctor is. Her performance goes beyond the character’s parameters because the Doctor – at least, as established by her predecessors – is not that sort of person at all. I don’t look at Jodie Whittaker and immediately recognise that, yes, that’s the Doctor. The Doctor she plays has diminished both in depth and in stature. She’s just too different. The Doctor is just not like that.

This is, of course, a personal view. I may be wrong. I genuinely would like to enjoy Chibnall-Who and I wish it could see in it the qualities that are so apparent to other viewers.

Okay. Enough of the general points. What about this episode?

Oh dear. Oh deary dear. Chibnall by numbers, really. In fact, it was so archetypally Chibnellian that there isn’t a great deal to be said about it that you couldn’t say of much of his other work. So: here’s a long scene that has you scratching your head. Cut to another long scene that has you scratching your head. And then another one. And another. This goes on for 40 minutes. Characters stand around info-dumping to each other without actually telling you what on earth is going on. Blam blam blam pow zoosh bang. Introduction of new character and then of another new character. One of them was played by Barbara Flynn – love her – who used to be compulsory casting in all the classic lit adaptations in the ’70s and ’80s and who was, of course, in A Very Peculiar Practice. Who was she playing? Don’t know. Oh, there’s Jo Martin’s Doctor / a Weeping Angel / that space doggie / some Cybermen / some CGI Daleks / some blue whizzy things that reminded me of the bats in State of Decay.

It all looks very nice. Good style, guys. Where’s the substance? Stuff happened, but I’m not sure what it was. Last week, we actually had a storyline. Not so this week. The Flux was treading water and we took a break from the season arc. Instead of a story, we looked at some things and they looked very nice. Perhaps all will be made clear. Or perhaps not.

Yes, there were some good bits. As usual with Chibnellism, they’re not developed. One shot of a Cyberman was a direct copy of a shot in The Invasion, so I liked that. Swarm and Azure are well acted. Swarm is a cross between Sutekh and Sharaz Jek but is undeveloped, so he’s nothing like as interesting as either. He is just a very bad baddie, marginally better than that dull bloke who collected teeth. Dan’s good. As with Graham, I think he’s probably singled out because he’s the best of the regulars; compare him with Bill, or Donna, or Sarah, and he’s just not in the same league. He’s a massive improvement on Ryan, but he’s decent; he’s not one of the greats. (Incidentally, doesn’t he have shiny white teeth? How did Dan afford that kind of dental work, eh? I think we should be told.)

(As an aside, I note that the Mighty Mallet of Message has been mercifully muted this season — we’ve been spared the now customary fatuous exhortations to abandon our moral degeneracy. Maybe Chibnall has come to appreciate that smashing people over the head with self-righteous platitudes just irritated them?)

Not good. Not good at all. I even started to doze off at one point – sorry, it’s been a busy week. Barry Norman used to say that dozing during a film was a legitimate form of criticism. (Don’t worry: I didn’t actually fall into the arms of Morbius. Morpheus. I had to keep awake because I had a review to write.) Once, Upon Time is notable for the use of a comma in the title of an episode of Doctor Who. It wasn’t notable for much else. Not an episode I shall watch again, I fear.

But then, that’s just what I think.

Reviewed: Doctor Who, Flux – Once, Upon Time 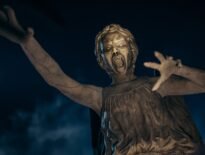 Doctor Who on TV Reviewed Reviewed: Doctor Who, Flux – Village of the Ange… 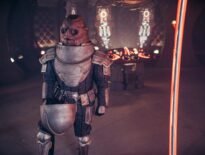 Doctor Who on TV Reviewed Reviewed: Doctor Who, Flux – War of the Sontaran…
1
%d bloggers like this: