It’s Doctor Who Day — the 58th anniversary of the show’s beginning — so, while we lovingly recall past triumphs, there’s also no better time to look towards the future. So what’s in store for the New Year’s Day special?

The BBC has released the first details of the as-yet-unnamed festive episode, starring the Thirteenth Doctor (Jodie Whittaker).

Sarah (Aisling Bea) owns and runs ELF storage, and Nick (Adjani Salmon) is a customer who visits his unit every year on New Year’s Eve. This year, however, their night turns out to be a little different than planned…

This is the first of three Doctor Who Specials airing in 2022. The second airs in Spring (presumably Easter, but that’s guesswork right now), and the third will be part of the BBC’s centenary celebrations in Autumn. That will see the Thirteenth Doctor regenerate, and Chris Chibnall leaving his role as showrunner, making way for Russell T Davies’ return for the 60th anniversary in 2023. 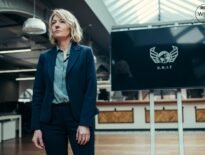 News Yes, UNIT Is Back in Doctor Who Series 13: Survivo…