Why Is Ryan Gosling Wearing a (Bootleg) Doctor Who T-Shirt Featuring Ncuti Gatwa? Ryan Gosling has been wearing a bootleg Doctor Who t-shirt featuring new Doctor, Ncuti Gatwa, on the set of the upcoming movie, Barbie. There’s a sentence I never thought I’d write.

The picture, Ncuti against a timey-wimey swirl with the current logo below, was actually made by Matthew Purchase, who is selling the shirt through RedBubble, with about 50% of proceeds now going to The Goboka Rwanda Trust. Ncuti actually credited Purchase on Instagram too.

Before that, Gatwa posted to his Instagram Story a photo of Ryan with the caption:

“Dolls supporting Doctors. As if I couldn’t love [Gosling] any more.”

Gosling is playing Ken in the Barbie movie, which stars Margot Robbie in the title role.

So do Gosling and Gatwa know each other? Yep — both play Ken, alongside Shang-Chi and the Legend of the Ten Rings star, Simu Liu! Variations on a theme, eh?

Even showrunner, Russell T Davies, was surprised, joking on Instagram:

“This is, genuinely, Ryan Gosling wearing a t-shirt of Ncuti Gatwa as Doctor Who. We’re suing him, of course. Illegal merch.”

But actually, we already knew that Gosling watches Doctor Who. When Matt Smith was cast in Lost River, Ryan recalled:

“I was writing and I heard his voice. Doctor Who was on TV and he was doing a scene where he had a microphone and he was literally ruling the universe telling these spaceships how to it was going to be. I’ve never really seen anybody that looks like him or is like him. He’s his own thing. I got really about working with him and I was so happy he came on to do the film.”

That scene would very likely have been The Pandorica Opens, in which the Eleventh Doctor seemingly bats away Daleks, Cybermen, Sontarans, Sycorax, Sontarans, and more, by essentially challenging them to “remember who’s standing in your way.”

Needless to say, this is fantastic publicity for the series — Ncuti hasn’t even started filming Doctor Who yet and there’s already support from Hollywood A-listers!

Why Is Ryan Gosling Wearing a (Bootleg) Doctor Who T-Shirt Featuring Ncuti Gatwa? 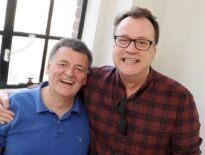 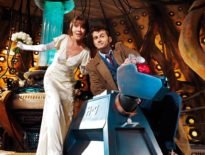