When Does The Power of the Doctor, Jodie Whittaker’s Last Doctor Who, Air? It’s looking increasingly likely that The Power of the Doctor will air on Sunday 23rd October 2022, as part of the BBC’s centenary celebrations.

The expected airdate has been reported by TV Zone, which also runs this intriguing one-line synopsis:

“Who is attacking a bullet train on the edge of a distant galaxy?”

Needless to say, neither the expected airdate nor the synopsis have been confirmed by the BBC (so it’s curious where that line has actually come from); indeed, the BBC refused to comment. Still, we’re pretty sure they’re on the money here: the 23rd October has been mooted for a little while now anyway.

This will be Jodie Whittaker’s last regular story as the Thirteenth Doctor, as well as the last serial by Chris Chibnall, who relinquishes the role of showrunner back to Russell T Davies. Whittaker and Chibnall have been working on Doctor Who since Series 11, which began in October 2018.

The Power of the Doctor also sees the return of the Daleks and Cybermen, as well as Sacha Dhawan as the Master, Jemma Redgrave as UNIT’s Kate Stewart, as, as revealed at the conclusion of the Easter special, Legends of the Sea Devils, Janet Fielding and Sophie Aldred as Tegan Jovanka and Ace respectively. Tegan was a companion to the Fourth and Fifth Doctors, while Ace accompanied the Seventh Doctor through time and space.

It’s directed by Jamie Magnus Stone (Ascension of the Cybermen/ The Timeless Children) and is expected to have a duration of around 90 minutes.

So 23rd October 2022 is likely, but not yet confirmed. You should probably pencil it into your diary anyway Either way, it being the 1st October right now, we can safely say that Doctor Who returns to BBC1 and BBC America later this month!

When Does The Power of the Doctor, Jodie Whittaker’s Last Doctor Who, Air? 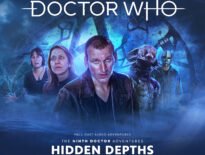