The eighth series of Big Finish’s River Song spin-off show is about our mechanical friends, and all the wonderful sizes and shapes they come in.

Doctor Who has famous robots of its own, but it’s The Diary of River Song’s own creation that not only opens this boxset in a two-parter but also has a far more enjoyable incorporation than its Doctor Who-sourced robotic contemporaries.

Rachel Burrows, the robotic girl encountered by Professor River Song in Series 2 story Five Twenty-Nine, returns for Series 8 opener Slight Glimpses of Tomorrow and is excellently utilised for dramatic effect in a very different way to her first (and probably spin-off show-defining) debut.

River left Rachel, played by Alex Kingston’s own daughter Salome Haertel, at the end of their first proper encounter but she has come back to her now to check up on how her lengthy robotic life is treating her and teach her a little about its nature. It’s a story that not only plays on the parent-child dynamic that already exists between the two actors, but is a character study on River disguised as a character study on Rachel.

Throughout we are shown the contrasts between the pair and their gut (do robots have guts?) reactions as they travel through the entire history of a would-be doomed planet. A seasoned time traveller like River takes all of it in her stride, seeing the rise and fall of civilisations and even individuals they meet on the way, and she’s almost deliberately happy-go-lucky in the face of it all.

Rachel, who despite being a robot person clearly has feelings and very deep-set ones at that, is the opposite on the surface. She’s quiet not because she’s unemotional, but because she’s processing her experiences as we would, and you start to see from both her and River’s actions that they are actually very similar underneath. What starts off with River pretending to be her aunt (Rachel did have parents of her own in Five Twenty-Nine) eventually translates to by the end of the second story being an acceptance that the dangerous but do-gooding River could be a maternal figure.

Haertel’s acting style in her role is very… android-y, but it really works well rather than ever coming off as jarring and actually does an important job of reminding you this human-looking individual is, in fact, not. And the plot works to humanise her in a way that exposes what makes her humanity important to what she is; the dramatic climax when she stands up and does her own thing is brilliantly worked and even more so in the feelings it leaves the listener with about how human River is (the final act of this story is artful character work).

There’s also a feminist sub-plot which is expanded on in the behind-the-scenes interviews and is an awesome take on women’s roles in history in a way that you would expect a BBC Four documentary to have.

There are some aspects of the plot which link to the very staples of science fiction, whether that be the power of androids or H. G. Wells’ The Time Machine, and that works to the story’s favour and reminds us to always ask which characters we should be feeling sympathetic to.

The second story, A Brave New World, is a direct follow-up and responds to everything we and the characters learned in the preceding tale. As a result, there’s not too many plot details that can be given away without linking to the outcome of what came before it.

It really sets up Rachel as a person we can trust like we would a companion to the Doctor, and this is very much a story told through her eyes, with River on the side. The responsibility of having humanity, knowledge, and of course time travel is probed here again but rather than taking the characters in and out of the plot for development, Rachel stays firmly in it throughout and shows her understanding of caring is arguably stronger than River’s.

Because of Haertel’s young age, and therefore vocal range, it’s easy to forget she’s playing a character vastly older than herself even when the characters in-story look past Rachel’s teenage appearance.

The supporting cast here includes a very special cameo from a famous face, but that particular moment doesn’t distract from Rachel’s plot and how she handles the crew of the spaceship she is on, with and without River’s help.

While River had an upper hand before, Rachel has ‘grown up’ enough to exit at the end here in a position either to live a life without ever meeting River again to be a well-developed character to the point that she could be dropped back into this range or any other, and work well with River or any her friends.

Whatever elements of humanity that filled the first two stories get turned on their head for A Forever Home, which is just very, very weird.

K9’s inclusion on the boxset cover is certainly a way to attract fans to this release, but the story that includes the Doctor’s robotic dog companion doesn’t serve it or River Song well.

It starts with K9’s robotic cat wife adopting River Song and essentially putting her in an enlarged kennel. She’s taken on walks, she’s fed, it’s part of the local culture, and it’s the kind of activities I highly recommend not to search for on the internet. Although if This Morning invites River Song and K9 on later this year to chat to Holly and Phil, I wouldn’t be surprised.

We get an early apology from K9 for his deception in being complicit to this weirdness, but it’s too late. These scenes can’t be unheard.

And then it gets even weirder.

We have evil K9, multiple K9s, K-9 & Company references, K9 attempting genocide, a villain who turns his… he creates robotic cat women. When a character says a pun is irresistible, you can tell that’s definitely the writer making a meta reference to their own work.

River Song is of course in this story for far more than her pet antics, and she unravels what’s really happening with the assistance of a K9. It’s a little confusing at times, as well as new levels of weird.

The final story is Queen of the Mechonoids, and is our first teaser of the upcoming Tenth Doctor series Dalek Universe while also reintroducing three names with lengthy Doctor Who origins.

First of those is of course the Mechonoids, the spherical robot servants with flame-throwers used as world colonisers by humans. The other two are Anya Kingdom and Mark Seven, agents of the Space Security Service.

Anya and Mark, also a robot, land on an ice planet where River Song has crashed a small spaceship and has gone missing, potentially dead. She isn’t deceased, but has instead established herself as the leader of a group of local Mechonoids who are thrilled to be graced by the presence of what they thought was a human coloniser.

We get a very flirty River this time as she builds a rapport with two characters who will soon be meeting a modern Doctor. They’re both from the classic era of the show, so comments about genitalia are very new territory for them. River’s a greedy character, both for using dialogue a little too juicy and also at being the best archeologist possible by cheating the rules as a time traveller.

It’s also a great old-meets-new in what is a very Terry Nation-style tale of exploring a hostile planet with Indiana Jones-esque defences. The Mechonoids don’t join in on all of this venturing – their spherical shape doesn’t lend itself to crossing ravines and the like – but they maintain an important role in all three acts and also appear in several varieties in a similar vein to how they have been expanded in their recent return in the DALEKS! animated series.

Some of the hurdles they come across are incredibly 1960s, such as defences that this reviewer would describe as anti-life lasers that only Mark can get through, as well as an ice bridge.

The story then ventures into a combination of The Daleks’ Master Plan and Voyage of the Damned, but in a way that is also true to the River Song series. It fits the runaround elements of a Nation story into a far shorter runtime, and the villain is a classic Big Bad. It will be interesting to see which elements of this story, beyond the welcome return of Anya and Mark, are taken into Dalek Universe.

We already know River Song is going to turn up in the series, and the Mechonoids; while Queen of the Mechonoids does work on its own accord with its setting and structure, you can’t help but feel the whole thing is a set-up to something larger and with even higher stakes.

The Diary of River Song: Series 8 is available from Big Finish now. 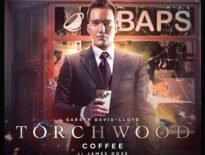