And… K-THUNK.
(Not K-KLAKK, you notice. Definitely K-THUNK.)
K-THUNK is the representation, dear reader, in written English, of the sound of the letterbox opening and of an object being projected through same and landing on the mat.
The date: the early 1970s. The place: London, near Heathrow. The time: about 6am, winter, and it’s still dark outside. Seven-year-old rushes to the mat to pick up the delivery from the paperboy. What is it? Why, the latest edition of TV Action. Deep and unconfined joy.
TV Action evolved from Countdown, a comic produced for just a year by Polystyle Publications (and which we never got). We did, however, subscribe via the newsagents to TV Action; we were allowed one comic a week and it replaced our subscription to The Beano. (Trivia note: Dennis the Menace is these days drawn by Kev Sutherland, who is also The Scottish Falsetto Sock Puppet Theatre. The said striped marauder is voiced on TV by one Sophie Aldred. You can see a wobbly but very funny video of Sophie performing with the Socks at the last Bedford Who Charity Con, on the event’s Facebook page.)
‘But why?’ I hear you cry. ‘Why replace the shenanigans of the polychromatic, perfidious Dennis, of Babyface Finlayson and of The Three Bears with TV Action? What could prompt such desertion and unfaithfulness?’ Because TV Action had the Doctor Who strip on its cover – and it was bloody good, too.
Beautifully illustrated by Gerry Haylock, the strip was in full colour on the cover (very rare to have a colour comic strip in those days), with two further monochrome pages inside. In pre-Target days (this is a long, long time ago, you see), TV Action gave Doctor Who fans their fix during the summer months when the programme was off-air. And I can remember the excitement of Saturdays during the then-current seasons of Doctor Who: you got two doses of it, one on TV, and the other in the comic. While Jo and the Doctor battled the Master on television, Doctor Who took time out from his country cottage to fight aliens in the comic strip.
Took time out from his what?!
Yup. His country cottage. Unlike the risible TV Comic strips with Hartnell and Troughton’s Doctor, the TV Action storylines stuck fairly closely to the TV series’ tone and continuity, though with some tweaks. No UNIT, no Jo, no Bessie. Instead, Dr Who (as they usually called him) drove a car of remarkably similar design and colour, called Betsie. No doubt the changes were introduced to keep the rights fees down; only Jon Pertwee would receive a payment for his likeness being used (and brilliantly captured by Haylock), and renaming the car also gets you round copyright, too. The TARDIS was parked in the elegant cottage, so villainously struck by space lightning in The Zeron Invasion. Dr Who hosted gatherings for his ‘fellow scientists’, who politely thanked him for sharing all his scientific secrets with them (‘Not quite all,’ smiled Dr Who).
One of the scientists was Finney, a thief in disguise. He wanted to nick the TARDIS and broke into the Doctor’s cottage that night. (Quite how he expected to get a police box into his swag bag was not explained.) Finney became a substitute companion for the Doctor, as he was whisked away to the Planet of the Daleks in the strip of that name (and a couple of years before the TV story of the same title was shown. TV Action got there first.) Glorious polychromatic Daleks sizzled their death rays at the Doctor and Finney as they escaped from the Dalek City on the backs of friendly triceratopses. (Previously, trapped between one of the dinosaurs and the trundling nasties, the Doctor had exclaimed, ‘The Beast, or the Daleks?’ – which I, still not fully literate, puzzled over as I thought he said ‘The Best, or the Daleks?’ Couldn’t understand what he was going on about.) 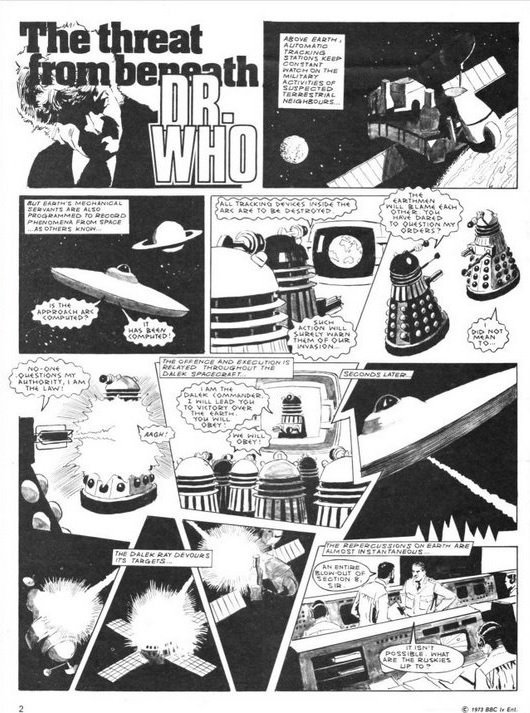 Other substitute companions followed. A favourite strip was The Uggraks: Ganesh-like blue aliens with elephant heads and Mekon-style big craniums for their massive brains, who tried to get the Doctor eaten by yellow fungus. The Uggraks, or their designer, had won the readers’ design-a-monster competition and were thus precursors of the Abzorbaloff (but better). The Daleks came back… and then the strip was demoted from the front cover, which instead sported a painting of the leading strip for that week: The Persuaders, starring Tony Curtis and Roger Moore’s eyebrow; a circumferentially-challenged American detective called Cannon; and, occasionally and joyously, Doctor Who. And the Daleks.
Well. I liked the TV Action strips. The stories were good, the artwork was superb, and they were jolly, jolly exciting. You can pick them up on eBay for about a fiver a copy.
The memory I have of the comic arriving on that dark winter morning, 44 years ago, is still clear. I can still remember which edition it was. I dumped all my old copies, of course; but there’s a framed eBay-sourced copy of that very issue on the wall of my study.
Happy days. Happy days. Heath was the prime minister, Jon Pertwee was Doctor Who, Roger Moore was the new James Bond, and we had just joined something called the Common Market…