Genesis of the Cybermen

As David Power has already outlined in this special week of Cyber-celebrations, the Cybermen have been through as many different bodies as the Doctor in their long history whilst remaining recognisable as the silver giants who menaced William Hartnell in his final story.
But, as an interview with designer Alexandra Tynan in this month’s Doctor Who Magazine explains, the Cybermen as written were intended to look rather different. Working on her first Doctor Who assignment, Tynan had the task of bringing Kit Pedler and Gerry Davis’s creations to life. As ever it was those long-standing features of the programme’s production, lack of time and shortage of money, that influenced the final design:
“A lot of the stuff in those scripts we could never, ever have done in those days, because of the ‘b’ word, which is ‘budget’,” Tynan (then known as Sandra Reid) tells the magazine. “I only had peanuts to spend, and there was no guarantee that the Cybermen would ever be seen again, so it had to be done very cheaply; we had to pare it right down to the absolute basics.” 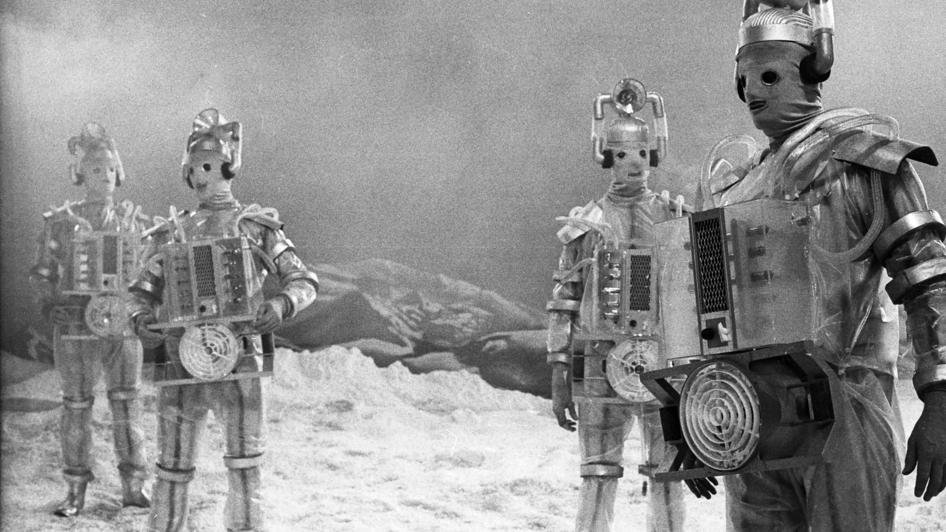 Viewers’ first sight of the Cybermen was to be a glimpse of ‘a line of three lights moving in the dark’. When seen up close they were to be ‘tall, thin, clad in silver link one piece suit.’ Intriguingly, the script’s description presented beings which retained far more of their human features than would end up on screen:
“Under the hair on the head is a shiny metal plate stretching from centre hairline front to occiput… Their faces are all rather alike, angular and by normal definitions good-looking…”
The script even offers the now somewhat unlikely sounding suggestion that the Cybermen could wear hats. Alexandra Tynan’s explanation as to how the final design came about (“I drew that thing so quickly because I was working against the clock”) is probably sufficient to explain the change from concept to costumes given the pressures involved in making the series. She recounts how, although the script stated that the Cybermen should have human hands, she had intended to produce special gloves for the performers to wear but, with so much to do to get ready for filming, forgot to get them ready on time. It’s interesting to speculate on how different the programme’s future would have been if something closer to Pedler and Davis’s description had made it onto the screen. It could be argued that the Cybermen would have been more disturbing creations had they more closely resembled human beings and that, it opting for a more robotic-looking design, the show’s production team moved away from the writers’ intention to depict an unsettling future for mankind and towards a more standard sci-fi enemy.
But it seems unlikely that the Cybermen would have been quite so enduring without that classic design which, in spite of regular remodelling, has stayed the same in significant ways. If there’s one lesson to be learnt from the most successful Doctor Who aliens and enemies it’s that, along with an easily imitated voice, it helps to have a simple, eye-catching design.
The heady days of Dalek-mania may have passed by 1966 but the Cybermen were an instant hit back on their first appearance in The Tenth Planet with viewing figures increasing from 5.5 million for Episode One to 7.6 million for Episode Three. A correspondent to Junior Points of View begged for more information: “Please, please, please can you tell me more about the robot men?” The Cybermen would return…
You can read more about the creation of the Cybermen in The Quest for Pedler – The Life and Ideas of Dr Kit Pedler by Michael Seely.

Genesis of the Cybermen

by Jonathan Appleton time to read: 2 min
Features #FollowFriday: Jon Davey
Features Evolution of the Cybermen: Then and Now
3
%d bloggers like this: