It’s Chriiiiiiiiistmaaassss! Well, nearly. Like, very nearly. It’s understandable if you’re panicking a bit about buying presents for your loved ones. Let us show you the way…
Doctor Who is over half a century old now, which is obviously a testiment to the show’s adaptability. But a considerable debt is owed to audio, one of the bastions of the brand, and which helped keep it going in the 1990s and early 2000s, in the so-called “Wilderness Years.” The Doctor’s audio adventures plough ahead, more bold and brilliant than ever, so if you’re looking for an ideal gift for Who fans, you’d be hard pressed to find something more appropriate than these five suggestions…

The Tenth Doctor Adventures: Volume One 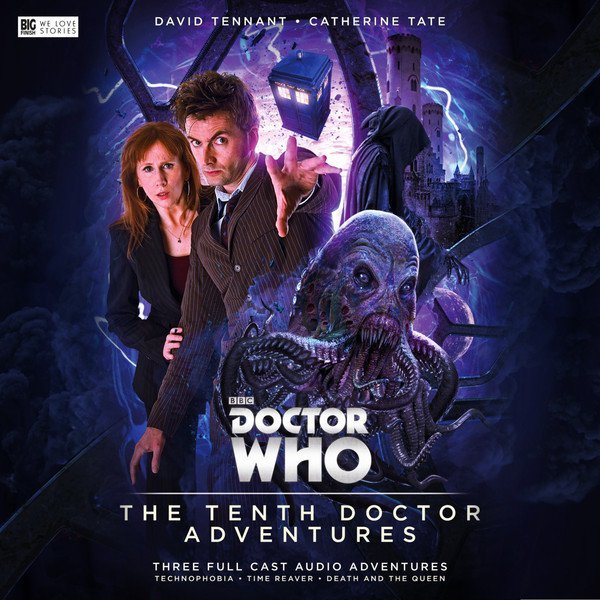 One of the greatest joys in recent years was finding out that Big Finish had acquired the license to make audios that take advantage of any material up to and including The Time of the Doctor. This extension has led to many fantastic stories – Classic Doctor, New Monsters; The Diary of River Song; The War Doctor Adventures – but arguably the highlight so far (at least for David Tennant fanatics) has been hearing the Tenth Doctor and Donna Noble (Catherine Tate) back together again.
The pair starred in three stories; in our review, we said of Technophobia:

“The bulk of the story, however, is incredibly fun, with a still-sparkling back and forth between the Doctor and Donna and a great mix of both action and drama. The second the Tenth Doctor swaggers back into existence is a wonderful thing indeed and writer, Matt Fitton characterises this Doctor extremely well, with passion and care.”

“David Tennant and Catherine Tate are clearly having fun returning to the roles they’re most famous for, but it’s not all laughs. They’re compassionate and angry and scared. Time Reaver pushes the Doctor in an unexpected way towards the conclusion, while Donna remains her wonderful self: caring, thoughtful, and ready to stand up and make her mark.”

And Death and the Queen rounded off a great trilogy, with Donna set for marriage!

“There are plenty of moments in this particular story, for both the Doctor and Donna, which lead the audience to question how their travels really affect our heroes and not always for the better… Overall, the story itself is engaging and keeps the listener guessing about the villain and ultimately what it could possibly gain from the marriage of Prince Rudolph and our Donna.”

Big Finish’s Limited Edition set comprises all three stories, but you can obviously buy them separately too. Over the years, Big Finish hasn’t been the only company producing original audio dramas of Doctor Who; sadly, a few have since gone out of business, but some stories from the archives (admittedly from the recent past) have just been rereleased so we can appreciate them all once more. Following Tenth Doctor Tales and Torchwood Tales, Eleventh Doctor Tales collects together around 15 hours of material, read by a variety of actors including Matt Smith himself, Arthur Darvill, Stuart Milligan (The Impossible Astronaut/ Day of the Moon), Frances Barber (A Good Man Goes to War), and Alexander Armstrong (The Doctor, the Widow, and the Wardrobe).
Those stories are: The Runaway Train by Oli Smith; The Ring of Steel by Stephen Cole; The Jade Pyramid by Martin Day; The Hounds of Artemis by James Goss; The Gemini Contagion by Jason Arnopp; Eye of the Jungle by Darren Jones; Blackout by Oli Smith; The Art of Death by James Goss; Darkstar Academy by Mark Morris; Day of the Cockroach by Steve Lyons; The Nu-Humans by Cavan Scott & Mark Wright; The Empty House by Simon Guerrier; Sleepers in the Dust by Darren Jones; and Snake Bite by Scott Handcock.
Quite a set. You might be worried that this would cost far too much for a stocking filler… but you can generally pick it up for less than £30!

Destiny of the Doctor – The Complete Adventure 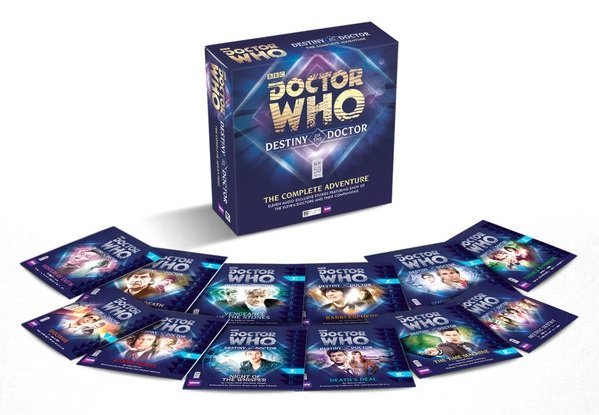 After the success of The Power of the Daleks, everyone’s eyeing up which further missing serial could be the next to be animated. The Macra Terror is certainly a strong contender, but it’s worth investigating the other formats your recipient can experience it.
This 3-hour-5-minute CD is read by Anneke Wills (the Second Doctor’s companion, Polly Wright), based on Ian Stuart Black’s 1987 Target novelisation of his 1967 four-part TV story. Here’s what it’s about:

In the far future a group of humans is living an idyllic existence on a distant planet. Their colony is run like a gigantic holiday camp, and nothing seems to trouble their carefree existence.

When one of them claims that the colony is being invaded by hideous monsters, no-one takes him seriously. But the Doctor’s suspicions are immediately aroused.

What is the terrible menace that lurks at the heart of this apparent paradise? Why are the colonists unaware of the danger that lies before their very eyes? And what is the Macra Terror?

It’s moody, atmospheric, and brilliant – the perfect thing for a chilly winter’s evening…

Sometimes, it’s great to indulge in the wider corners of the Doctor Who universe; Candy Jar Books has been working on a solid range of novels based on the further adventures of Alistair Gordon Lethbridge-Stewart, better known as the Brigadier, a character played by Nicholas Courtney. They’re licensed by Hannah Haisman, granddaughter of Mervyn Haisman, co-creator (with Henry Lincoln) of Lethbridge-Stewart, and the Great Intelligence.
Sure enough, the Great Intelligence returns in the series’ debut, The Forgotten Son by Andy Frankham-Allen, which ties together the alien’s timeline (so far) from The Abominable Snowmen and The Name of the Doctor. And it’s excellent. In our review, Christian Cawley said:

“Forgotten Son is a superb opener to the series, mixing recognisable Who lore, suppositions by cast members, tear-jerking dedications, a foreword by the great Terrance Dicks, and the familiar smile of the man we came to know as the Brigadier.”

You could go for the novel, but we recommend the audiobook too, read by Terry Molloy, who played Davros in the 1980s.

That’s all for this week’s Christmas Gift Guides, but we’re eager to know which other audio releases you’re buying (for someone else, or, indeed, yourself) as a festive treat…

by Philip Bates time to read: 5 min
Features 2016 TV Shows from Who Alumni You Have to Watch: P…
Features Christmas 2016 Gift Guide: DVDs and Blu-rays
4
%d bloggers like this: