Without a new series of Doctor Who, and hardly any Classic Who released, 2016 has seemed like a barren land, at least when it comes to DVDs and Blu-rays. And that might make Christmas problematic. After all, physical media is a solid stocking filler, more or less guaranteed to bring a smile to the face of all. Even victims of the Wire are over the moon when unwrapping Home Alone.
The newest episode, The Return of Doctor Mysterio, doesn’t air ’til Christmas Day (with the DVD scheduled for 23rd January 2017), so that’s no good for the festivities either…
You’ve no doubt woken up in the middle of the night, sweating like you’re one of the Flood, and screaming like you’ve just watched Kill the Moon. The cause of your nightmares? What to get an avid Who fan. Rest easy, dear reader, for we have solutions.
(With the steelbooks, we’ve linked to Zavvi – which offers cheaper prices on their exclusive products – but also to Amazon, in case Zavvi sells out before Christmas.) 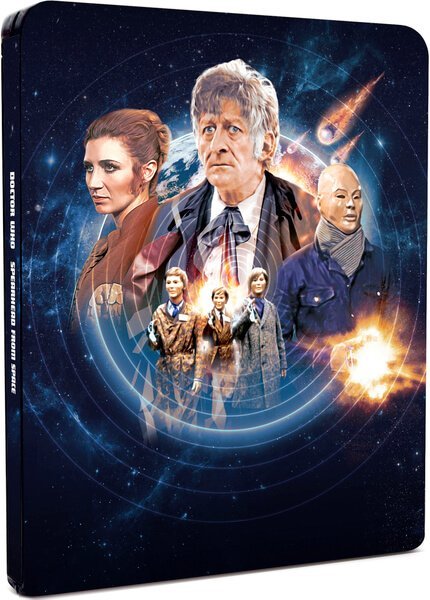 For the 487th time, Spearhead from Space has been rereleased. Luckily, any fan worth their salt watches the Third Doctor’s debut at least twice a week, can quote every line verbatim, and is assembling their own Nestene Consciousness using quantum enfolding and a paperclip.
The four-part serial has never looked better than in this Blu-ray edition, out now as a shiny, beautiful, little-bit-sexy steelbook (£12.99 from Zavvi). For anyone unfamiliar with steelbooks, where have you been hiding all these years?! They’re like the next evolution of Blu-rays, the flimsy case replaced by metal. Blu-rays for the Iron Man age, if you will. You won’t? Oh. Fine.
Regardless, when the Nestene Consciousness takes over – only a matter of time until those breast implants try to enslave humanity – we can take a moment of pride in knowing that, while other plastic Blu-ray cases attack us, the Spearhead from Space steelbook remains inert. What a relief, eh?

The Power of the Daleks Animation DVD 2016 hasn’t been entirely devoid of new-old Who: earlier this year, BBC Store unveiled an animated version of the long-lost serial, The Power of the Daleks. For Second Doctor devotees, it was the announcement of the decade. While the six-part black-and-white animation, complete with fully-restored soundtrack, was initially only available as a download, a DVD was forthcoming too. A Blu-ray is coming out next year, but really, who can wait until then anyway?!
In the DWC’s review, James Lomond said:

“I was most struck by how vividly the Vulcan colonists come across. The audio performances are compelling and snappy with some very efficient exposition in a tight script. The animation both elaborates what is happening while the soundtrack is all scuffles and bumps, but also gives a fantastic atmosphere… I had completely forgotten I wasn’t watching the original – it was just very good Doctor Who.”

No one should miss out on that! You might not have heard of this one before, but in the lull between the 1996 TV Movie and the 2005 revival, numerous attempts were made to make Doctor Who on an unofficial basis. Which obviously isn’t Doctor Who, but nonetheless, the episodes contained on this Mindgame Saga DVD do feature an officially-licensed Sontaran and Draconian.
Plus, Sophie Aldred playing someone who’s pretty Ace-like.
The first Mindgame saw the Sontaran, the Draconian, and the human (Aldred) trapped together in a prison cell. Certainly an interesting concept. Mindgame Trilogy, its 30-minute sequel, follows what happens to the three of them afterwards. This was a direct-to-video story by Reeltime Productions, but written by Miles Richardson, Roger Stevens… and the legend that is Terrance Dicks!

Quatermass and the Pit Steelbook Okay, you got me. Not Doctor Who. But it’s a highly-influential story (in many iterations), and this 1967 Hammer Horror stars Julian Glover, perhaps best-known for starring in Game of Thrones and For Your Eyes Only – but Who fans know him from The Crusade and City of Death! Andrew Keir (Daleks’ Invasion Earth 2150AD) plays Quatermass, with Barbara Shelley (Planet of Fire) is Barbara Judd. Writer, Nigel Kneale (particularly his Stone Tape) was an influence for Neil Cross when penning Hide (2012), and the tale itself will bring to mind Image of the Fendahl (1977).
As we say, it’s available in numerous versions, but this Quatermass and the Pit steelbook (just £9.99 right now from Zavvi) comes with an audio commentary with Nigel Kneale himself and director, Roy Ward Baker, and interviews with Glover, Judith Kerr (the Mog author who was married to Kneale), Joe Dante (Gremlins), Kim Newman (who write an examination of the script for the BFI), and Doctor Who‘s very own Mark Gatiss (The Unquiet Dead; Cold War).
Sold? You should be. 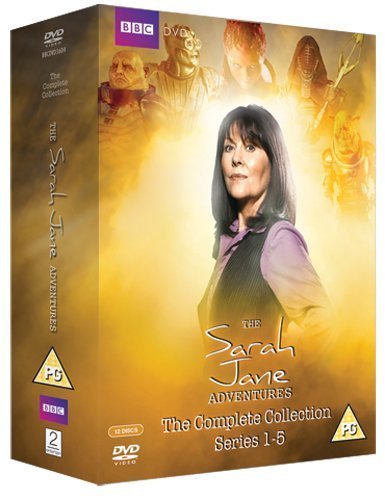 Whether the recipient liked Class or not, exploring the Doctor Who universe is always a tempting prospect. Arguably the best spin-off is The Sarah Jane Adventures, it’s certainly the show with a tone most reminiscent of Doctor Who, and that surely makes it a success.
But it went largely ignored. Many were probably put off by its labelling as a children’s show. Some of the best TV series have kids as their prime audience, however, and SJA shines brightly, partly due to its great cast, and partly due to the writing. Ah heck, the whole production is excellent. Often, its limitations work in its favour, and aliens like the Judoon, the Sontarans, and Raxacoricofallapatorians are given more screen-time for us to learn more about them.
Also, you can get all five series pretty cheap. A sizeable and fantastic stocking filler.

I can hear you now. “You missed off the best release of the year!”; “Where’s Alvin and the Chipmunks: The Road Chip?!”; “Power of the Daleks? We all know Death to the Daleks is the best Dalek serial evahhh!” Oh yeah? Well, wise guy, why not expand on this gift guide in the comments section below? And tell us: just what do you want for Christmas…?