Reviewed: Class – The Metaphysical Engine, or What Quill Did

There’s a notorious Big Finish story called Scherzo. It is a two-hander starring the Eighth Doctor and Charley. It is by turns brilliant and maddeningly infuriating – the distinctive, score-free atmosphere and surreal, ominous narrative rather let down by a rather tedious sub-plot, and in particular some lengthy conversations about Charley’s partially reciprocated feelings for her travelling companion. If certain scenes had been cut, it would make top three: as it stands, it’s somewhere near the double figure mark.
The Metaphysical Engine takes similar risks. It is an episode of Class in which the titular class are relegated to only the briefest of roles, consisting almost entirely of previously seen footage. This is the closest we’re liable to get this year to a Miss Quill backstory, and while that isn’t something that writer, Patrick Ness even attempts, it does place at least a little meat on the bones of a character whose role thus far has been to glower, swagger and deliver the most acidic of BBC-sanctioned one-liners. 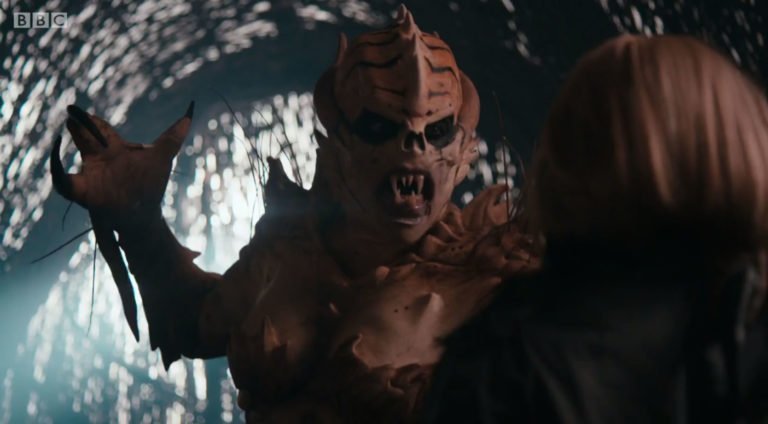 The five Heavens you meet in people
Let’s deal with the setting first. Metaphysical runs parallel to the events in Detained (except it doesn’t, although we’ll come to that later), but that’s where the similarities run out of track. Where Detained was tight, constrained, and dialogue-driven, its counterpart is the exact opposite: a story where the characters can literally go anywhere, where imagination is the limit precisely because every place that is visited is supposedly imaginary. It’s a story about stories; a land of fiction made tangible, both beautiful and deadly in that most obvious of clichés.
There is a moment in Detained when we see that Miss Quill has written ‘ONLY YOU PUT YOURSELF HERE’ on the classroom blackboard, and it’s a theme that plays out through her own journey inside the Engine (all sub-standard TARDIS interiors and wobbling cameras, and worthy of no subsequent mention). When I was outlining this review, I wondered what would happen if you’d spliced the two episodes together so that the story is told chronologically, cutting back to Quill and her companions every time the kids had extracted another warped confession in their intergalactic prison cell. But to do so would water down the distinctive effect of both episodes: Detained is purposely claustrophobic, whereas its successor gives the illusion of open space, even though the space is largely sub-atomic. 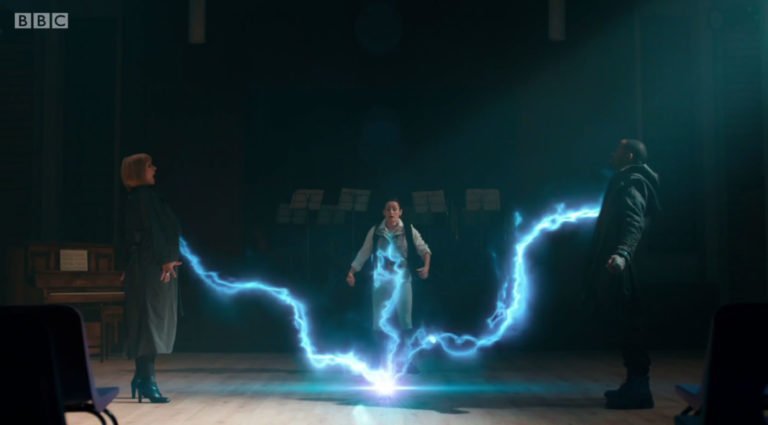 The problem is that it’s all a bit uneven. Visually, the whole thing looks marvellous, but nothing much is actually happening: what could have been an interesting forage into the notion of belief swiftly deteriorates, for all its good intentions, into a series of fetch-and-carry missions. We have no time to explore the treacherous, raspberry-tinted forests of the Arn before this week’s guest star has wrestled one of them into a sandwich bag. The caves that are Ballon’s personal hell are dark and foreboding but we are there only long enough for the most inconsequential of conversations and a fiery exchange with the mid-level boss, appearing in the form of an enormous, semi-Lovecraftian leviathan. Ballon himself is a dull and uninspiring addition: a violent convict with deeply-held religious convictions who belongs in the prison Sigourney Weaver visits in Alien 3, rather than running around inside his own head. Miss Ames fares little better, hiding beneath layers of plots and schemes that would make even the Seventh Doctor envious – her rewiring of the gun, the episode’s supposed punch line, is thus mind-numbingly predictable – but little is made of her beyond this, save a veiled, eyebrow-raising farewell (“You are… intriguing”) delivered as a parting shot as she walks out of the hall.
While all this is going on, Kelly – easily this week’s most interesting and ultimately conflicted character – is railing against a God whose existence she already disputed. It calls to mind the moment in Becker when Ted Danson was asked why he considered himself persecuted by a God he didn’t believe in, to which he responds “That’s why he’s after me, Margaret!”. NuWho has played the existential card so many times in its eleven-year run that this sort of thing can become very tedious, but Kelly’s fiery performance carries the scene – nonetheless when Ballon asks “Would you really want to hear what your God would say, if it meant that you would have to believe in her?”, you almost expect Joan Osborne to rise in the background, strumming her guitar and wailing “What would you ask if you had just one question…?”
https://www.youtube.com/watch?v=nPFnHdJ0dl0
“You do not want to talk to me after the day I’ve had.”
Part of Class’ erstwhile success is that it keeps things rooted very firmly in the present, but The Metaphysical Engine’s partial undoing stems from its decision to play with time: we know from last week’s revelation that Miss Quill will survive the experience; it’s simply a question of how. This is tedious when Moffat does it, and while there’s no harm if Class wants to venture into Batman territory occasionally, such riddles usually do nothing more than dull the narrative. It doesn’t help that the decisive shot of Kelly stepping over Ballon’s corpse was displayed in full view during the preview at the end of Detained – NuWho has always had a tendency to show us too much too soon, if only to keep the Twitter wheels grinding, but I refuse to accept I’m the only one who considers that relying so much on leaks and speculation displays a chronic lack of confidence in your own material. In any event, the Quill that emerges at the end of the episode is quite different: bloodied, battle-scarred (quite literally) but ultimately victorious, turning the relationship between terrorist and prince entirely on its head, if such a relationship can now be said to have any future.
(While we’re on the subject of appearances, can we at some point discuss what exactly has happened to Quill and Charlie? Are they wearing a perception filter? Or is some kind of genetic tampering at work? If a human-like appearance is nothing but an optical illusion, how is Quill’s hair able to grow? Has the Doctor dusted off his chameleon arch? I think we should be told, and I can’t help thinking that Matteusz is the one with the answers.) 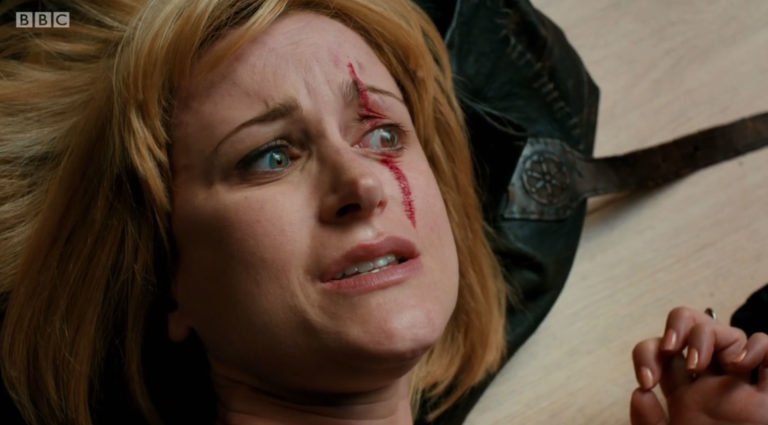 The notion of anatomy, indeed, plays a crucial role in the latter half of the episode, in what may have been the only scene in any Who-related programme I’ve had to watch from behind my hands. If you’ve seen it, you’ll know the one we’re talking about – there has probably never been a moment (even in Torchwood) quite so graphic, as Ballon forces the Arn up through a punctured eye socket while Quill howls in the manner of a woman giving birth (which is not so far from the truth of things). It is overtly gratuitous: a scene designed to test the mettle, but as with the sex scene in Nightvisiting, it serves a narrative purpose, emphasising both the cost of freedom and its sense of importance to the woman so desperate to attain it.
But ultimately, The Metaphysical Engine is one of those episodes that’s rather hard to review. It manages to skirt around big issues without ever really unpacking them. It’s this year’s Heaven Sent, dealing as it does with the notion of metaphorical imprisonment, much as Scherzo did before it. Stylistically, it doesn’t fit, and that happens to work in its favour. If it fails, it fails in style, and there is something about such a failure that dampens criticism, without eradicating it entirely. It is anomalous, and – like Heaven Sent – not entirely successful, but it sticks in the brain longer than many of its companion episodes, and indeed is set to reside there longer than many episodes of its sister programme.
Just be careful how you remove it. 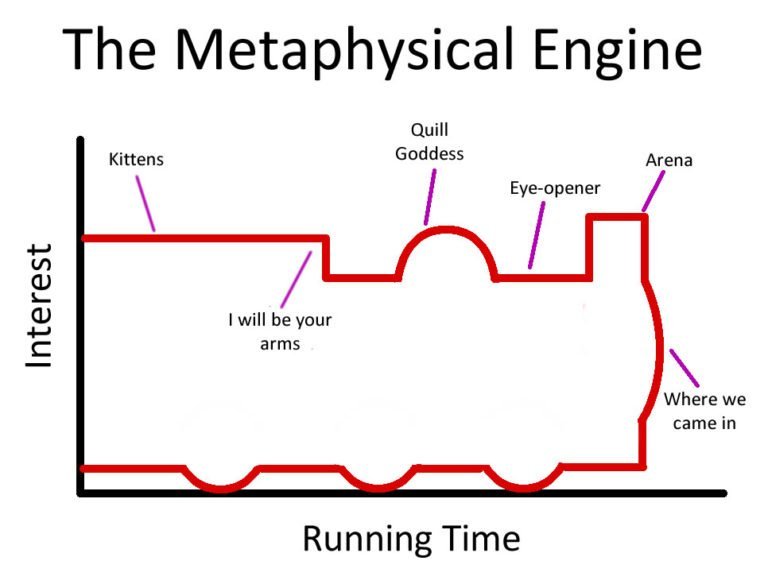 Reviewed: Class – The Metaphysical Engine, or What Quill Did