The fourth issue of Titan Comics’ Sherlock mini-series opens with a treatise that will be familiar to viewers of Sherlock for series-to-come. After texting a murderer Sherlock, beautifully characterised by Jay. goes on to define just what it is that drives a person to take a life, that need for the ‘spotlight’, that love of a mystery, the ‘desperate’ neediness of those brilliant minds driven to kill…it all sounds a little familiar…
Instead, at this stage of their burgeoning friendship, Dr John Watson chooses to take Sherlock’s rather unguarded view of his own complicity with those driven to commit murder as nothing more than the great detectives lack of social grace – despite a severe warning from Sergeant Donovan – rather than a confession for a crime yet to come.
Instead of questioning this obsession, Dr Watson, and therefore this issue, runs on the adrenaline of adventure – we race from panel to panel, cutting from bold angle to bold angle, running on the frantic, desperate energy of our two leads. 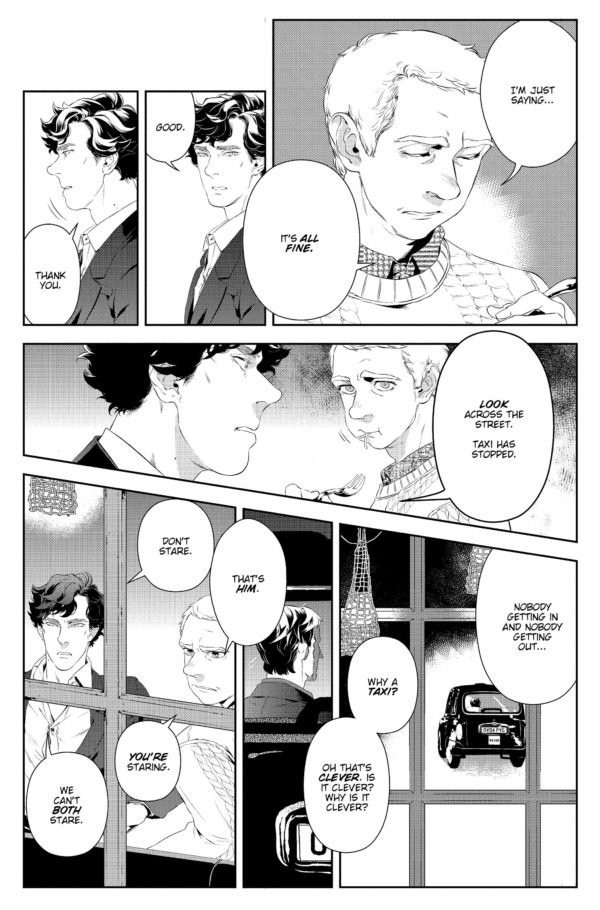 Jay. really finds both new and literal avenues to explore in what will be a very familiar narrative to fans. The use of shadows and crosshatching really give menace to the streets of London as the pair race through a minimalist London.
Setting a trap for our murderer, the detective duo slip into a restaurant for a stakeout/meet cute which, in a now-very-familiar trait, turns out to be neither of the above and more a cunning ruse to reveal something fundamental about their twin natures. Sure, it maybe Watson who is at the receiving end of this trick (hint: it involves a cane) but it’s Sherlock who we ultimately get a little closer to.
The restaurant scene (there’s a beautiful, one page panel of Sherlock sitting down at a table that I’d happily have framed) sometimes veers a little too close to fan fiction – there’s a prominent sexual tension between the two characters, in the sense that there’s something alluring in the unknowable desires of Sherlock – if anything, we’ve already seen the true Sherlock, the one visibly excited by the cerebral side of the crime, but it’s rather charming to see him almost on the backfoot. The panelling emphasises a growing intimacy between the two, even if they must literally remind us that yes, they are not a couple. From Arthur Conan Doyle’s first Sherlock Holmes adventure, there have been gaps in Sherlock’s knowledge and it’s a gentle reminder that some of those gaps – the fundamentals of life – sometimes elude even the greatest of minds.
Then, after bursting from the restaurant, we’re treated to flourish after flourish of London maps dissecting panels, Dutch angles down sparse alleyways, and near-misses as Sherlock discovers the ‘genius’ method our murderer has been abducting his prey in broad daylight. All of which serves to put you directly inside the mind of Sherlock in a far more convincing manner than its slightly clumsy television counterpart. While it does make the issue feel rather thin, Jay. does a fantastic job of ramping up the tension.
Despite not adding much to the central mystery, the character work, artistry and quieter moments between Sherlock and Watson, make what seems like a slight issue, an incident packed, adrenaline fuelled read.
Titan Comics’ Sherlock: A Study in Pink #4 is available to buy now from Comixology for £1.99